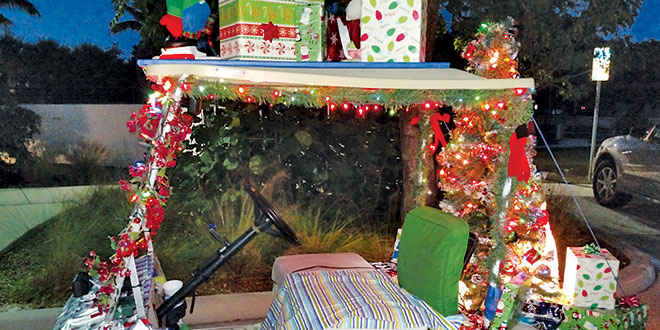 On a balmy Thursday night, December 17th, Goodland golf cart owners showed up in droves to show case and parade their brightly lit and cleverly decorated golf carts. Goodland may be the only place in Southwest Florida where licensed golf carts with licensed drivers are given free rein on the village streets. The golf cart parade is the brain child of Greg and Alicia Cameron who started this tradition last year at Goodland’s Marker 8.5 Restaurant, which the Cameron’s own. Only about 9 golf carts showed up then, but everyone enjoyed it so much, the Camerons resolved to do it again this 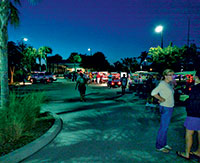 year. Cameron joined the board of the Goodland Civic Association (GCA) and easily convinced the GCA to pitch in this year. Consequently, this year’s program was sponsored by the GCA with President Greg Bello co-chairing along with Greg and Alicia Cameron.

The evening started at 6:00pm and convened at Margood County Park in Goodland. The golf carts lined up and were judged after which the crowd moved to the beautiful park pavilion where the first annual Christmas tree lighting took place, followed by Greg Bello’s awarding of prizes to the winners, and the placing of ornaments on the tree. Once again our fine Goodland restaurants, 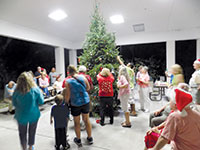 of which there are four, came through with gift certificates as prizes. Following this, it was back to the golf carts, where some paraded around town and others split off to go Christmas caroling. The carolers traditionally ruin the dinners of Little Bar patrons by traipsing through the restaurant. The evening ended up at the home of Lynn and Pat Albee, who had set out some yummy eats and beverages for the carolers.

Greg Bello estimates that over 100 people attended the festivities, bringing along about 25 golf carts. This is easily most of the golf carts in Goodland. “The community came out large, bringing their children along” said Bello, “It reminded the older ones of Christmas past.”