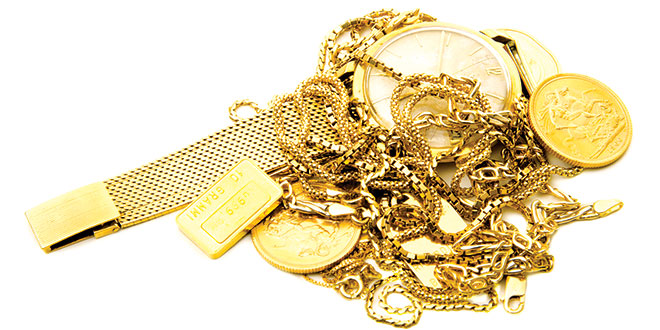 I was beginning to worry that I may not see the renaissance of demand for the precious yellow metal as jewelry in my lifetime. Maybe that seems a little drastic to many of you, but may I be frank and ask you a simple question? When was the last time you bought a really nice piece of gold jewelry?

Ah, just as I thought, so it’s been a while. Want to know something you may find surprising? Until last season came around, that made two of us!

Sounds incredible? After all, I’m a designer/goldsmith and owner of a fine jewelry store. Sure, I would buy several gold chains here, some bracelets, a couple of rings there to keep the store stocked, and for the past four years — a time I coined the Second Great Depression — I bought just what I needed and tried to avoid going overboard.

I admit I was afraid to try something new because many of my previous investments in “the newest thing” would never pan out. I have learned that while the newest fad jewelry may be the rage in major metropolitan cities as close as Miami and as far away as Europe it will not even be noticed or fall on its face in Naples or on the island only after a few months.

The Pandora jewelry line is the only one I know of that has enjoyed such incredible longevity, and even that could be passé in the near future.

Let’s not kid ourselves, in the years following 2008 — yes, even here in paradise things started to go sideways — the effects of this horrible economy eventually took their toll on island residents and more than just a few businesses. Sadly, many have moved off the island or closed their shops forever.

On a good note, all the gold, platinum and silver jewelry I had in inventory actually tripled in value. On a bad note, the cost to replacing sold pieces with new gold jewelry was down right obscene! A poor economy lowered my percentage of gold and diamond buying customers from 80 percent of the population to 10 percent. I actually bought more gold from the public than I sold.

This happened nationwide, the jewelry business was on the rails without wheels. First, Fortunoff, a New York jewelry icon, closed its doors. A few large mall chain stores filed for protection, then several national chains ceased to exist and hundreds of Mom And Pop jewelry stores closed their doors as a result of the recession.

From 2009 on, a jeweler on the island had a better chance making a living hawking sheepskin earmuffs on Residents’ Beach in August than selling high-end gold and diamond jewelry. In my 20 years on this island, I can recall as many as eight jewelry stores that have come and gone, recession or no recession.

The jewelry industry adapted, as I did, and as long as women will love jewelry, there will be jewelers. It’s just that the metal jewelry pieces selling were not solid gold. The emergence of alternate metals began slowly at first and progressed at break neck speed.

Although sterling silver was more than to 10 times its original value, it was far less expensive than gold that hit the all time high of $1895 per ounce on Sept. 5, 2011. The beach earmuff enterprise was looking better by the minute.

Sure, the average jewelry store had gold jewelry, and displayed it and let the customer see and feel the quality. It was the price that put the kabash on the thrill like a bucket of ice water. Silver was the affordable choice. I invested in more silver stock and even less expensive stainless steel. Only one problem, white metal was not the desirable color for many jewelry shoppers; they still wanted gold. A slow but quiet awakening occurred in my humble jewelry store: My clientele, including yours truly, as a whole were not overly thrilled by “alternative metal” jewelry.

The years following 2011 were not kind to the jewelry industry either. My ace in the hole was besides being a jeweler, I was also a goldsmith, and despite the recession, sea life jewelry will always sell here in paradise. With a passion, I designed and created new pieces in my shop and kept the front window and showcases fully stocked.

Fact: Jewelry can break, wear out and or require repairs or adjustments due to age, wear and tear and especially shrinking or enlarging appendages’, such as fingers, ankles and necks. The repair work in my shop increased tenfold, and those folks that did not sell their gold to pay the bills commissioned me to create new jewelry from old.

What appeared to be the bitter end was in fact a new beginning! Gold and silver will cost less this holiday season.

My take on why the price of gold and silver has been plummeting is because money hungry investor’s have lost interest in its ability to create the quick fortunes enjoyed the past four years and are moving on to manipulate some other new markets that can be squeezed to create high profits.

I went out and bought new gold jewelry for my shop because it is more affordable than it has been in recent years, and my customers have always loved gold. Now, it shows; the demand is there, and the proof will be this holiday season. I will be watching the uptick very carefully. It will be wonderful to provide or create beautiful and quality gold jewelry again. Nothing feels like real gold.

Richard Alan is a designer/goldsmith with more than 40 years of experience and owner of the Harbor Goldsmith of Marco Island. He welcomes your questions about “all that glitters” at 239-394-9275 or at harborgoldsmith@comcast.net.