Going the Extra Mile for a Cure 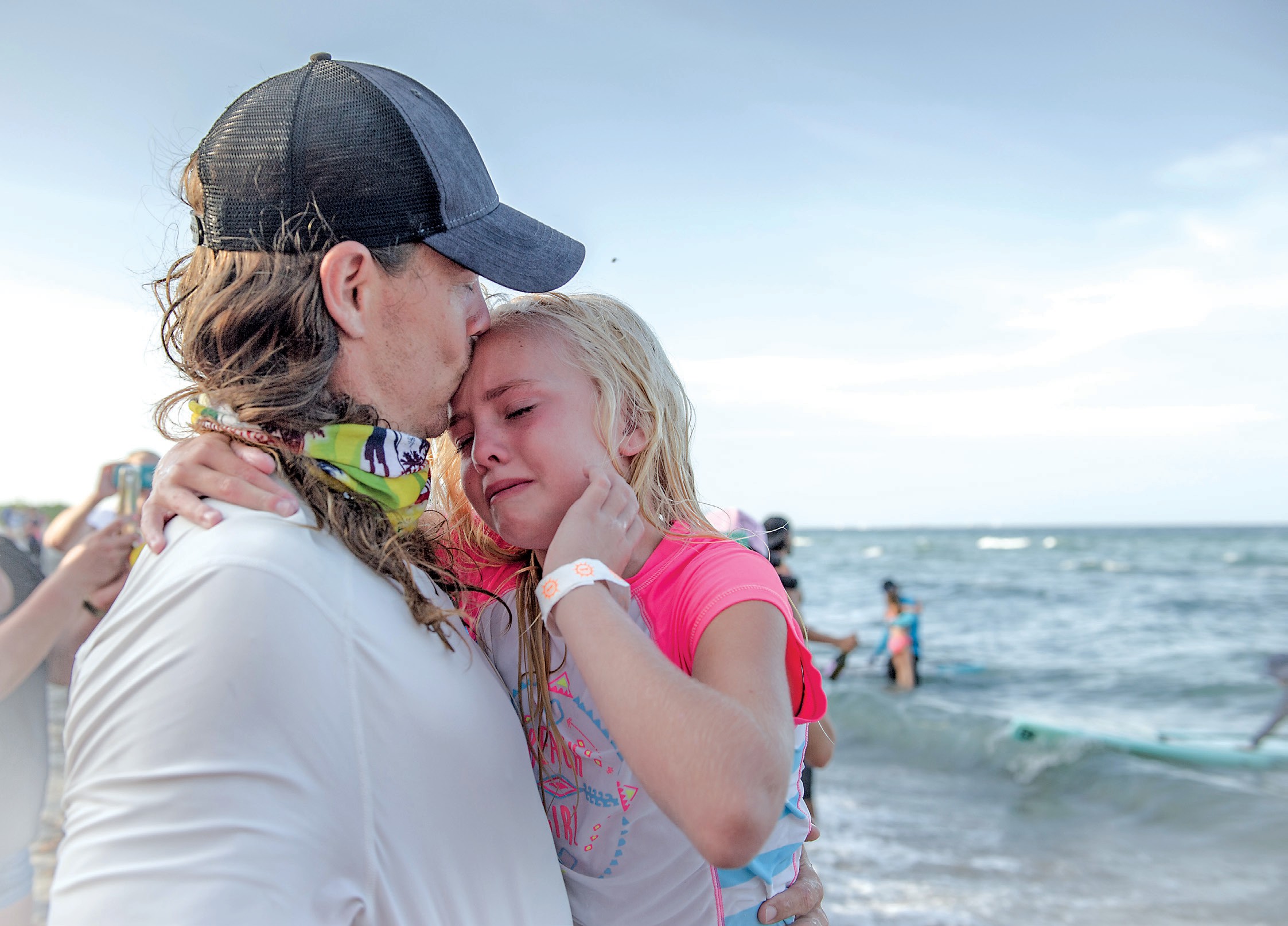 An emotional moment on the shore for young Piper Suit, as she hugs her father Travis. After Piper was diagnosed with cystic fibrosis, Travis initiated “Crossing for the Cure,” a fundraising event where participants paddleboard from the Bahamas to Palm Beach County. This year, Marco Island Police Officer Josh Ferris made the challenging journey. Read about it on page B-1. Photo by Lori Griffith, Chasin A Dream Photography

he plight of a little 11-year-old girl in the Palm Beach County area was one which local Marco Island Marine Police Officer Josh Ferris was quick to warm to. Little Piper Suit was 4 years old when she was diagnosed with an aggressive form of Cystic Fibrosis (CF) in 2011.

Her father, Travis Suit knew he 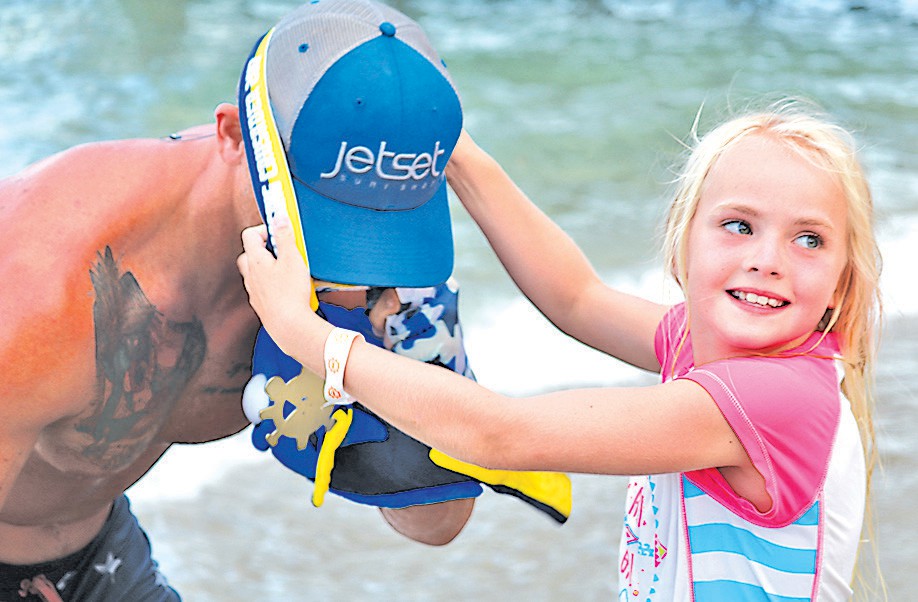 Piper awards the medallion to Josh. Josh was met by hugs and good wishes from all in attendance, but two of the most meaningful came when little Piper Suit ran up to place an event medallion around his neck to say thank you for his efforts, giving him a hug and a kiss. Photos by Steve Stefanides

had to do something to help raise awareness and monies for research for this cruel disease. Thirty thousand individuals are believed to be living with CF within the United States today, and another 1,000 patients are diagnosed with the disease each year, many are children under 2 years of age.

CF is an inherited life threatening 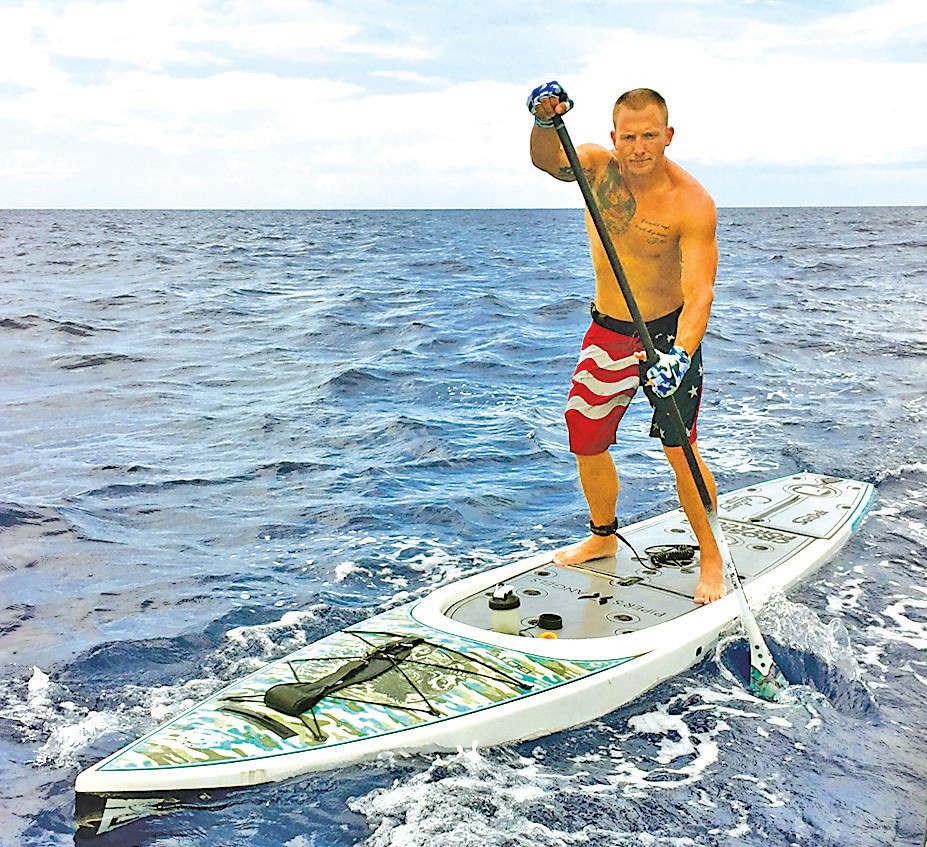 disease which affects the lungs and digestive system. The body is unable to ward off the accumulation of mucus in the airways, causing the patient to have limited abilities to breathe. Subsequent infections will plague a patient within both their respiratory and digestive systems. At this time the disease is incurable, however early diagno sis 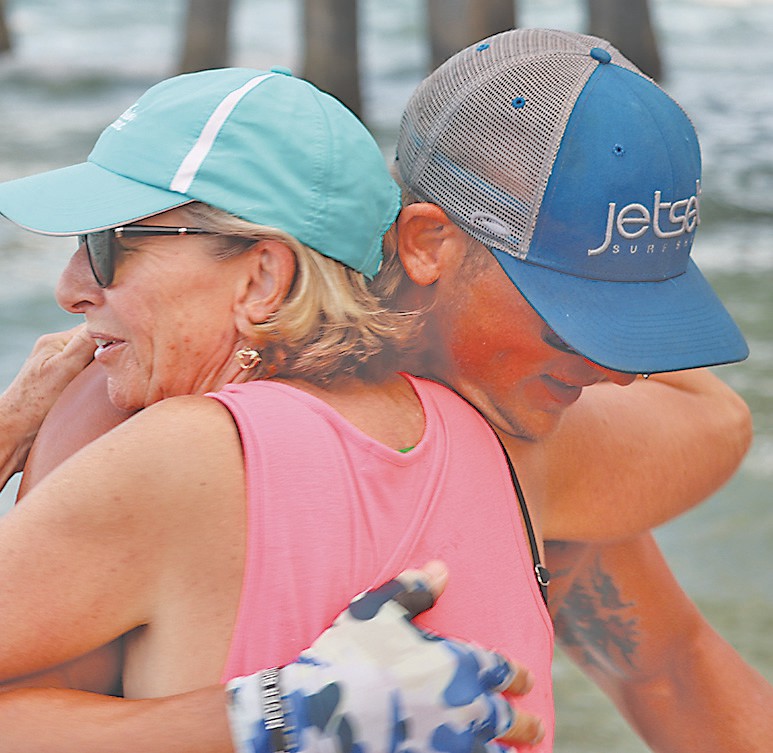 Josh gets a big hug from his mom.

assists in dealing with the effects of the disease before symptoms are evident and can assist in a patient’s care.

In 2013 Travis initiated a fundraiser through an event called “Crossing for the Cure,” when he and four of his friends threw their paddleboards into the water in the Bahamas and took the grueling 15½ hour 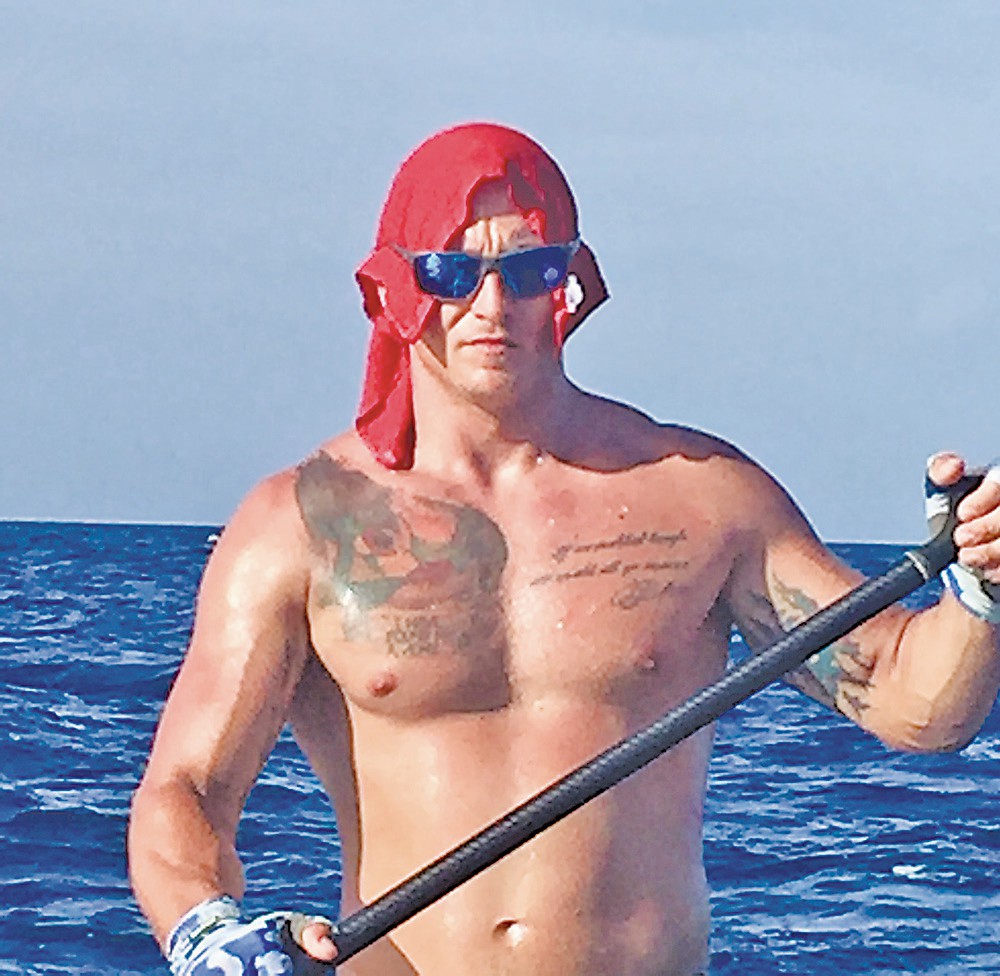 paddle back to Palm Beach County.

2017 saw Travis put the call out again for volunteers, who would gather pledges to benefit research and education to help all those experiencing what he and his family have been undergoing for the last six years since Piper was diagnosed. 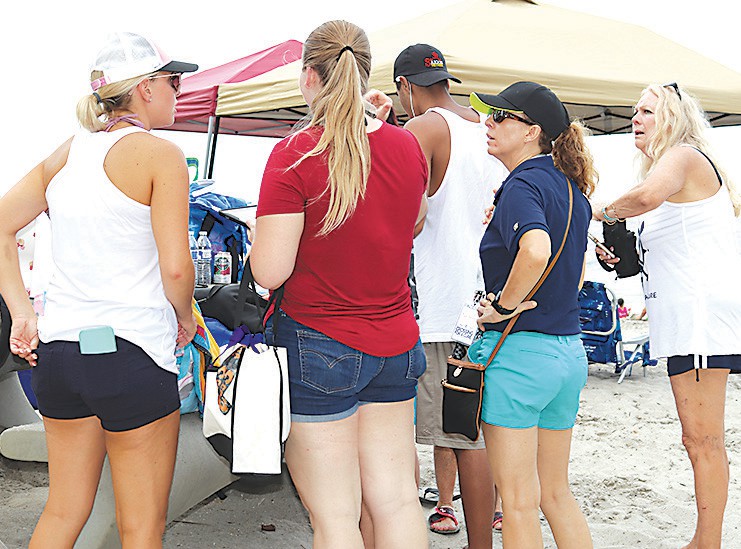 Families await news on the paddlers. Photos by Steve Stefanides

Bimini with their support crews following in their boats to make the challenging paddle back to Dania Beach, Florida. Josh was joined by his Marco Island Police Department counterparts, Bob Marvin and Clayton Smith. Marvin is the other fulltime marine officer and Smith is a part-time marine officer when not doing his fulltime patrol duties. 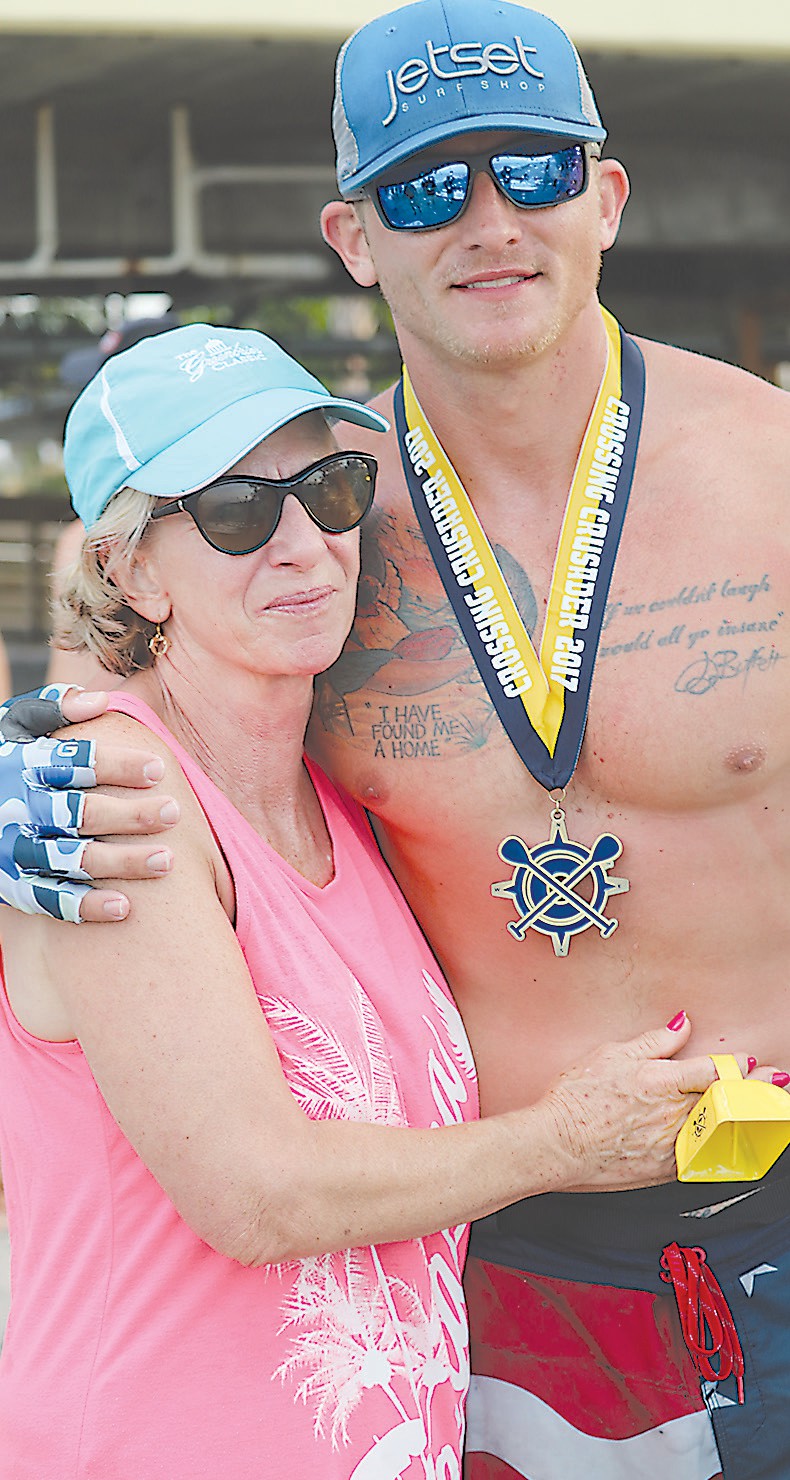 was hardly a dry eye onshore when Josh was met by a group of family, friends and supporters upon reaching shore around 7:45 PM after leaving Bimini around 5 AM that morning. Tides and winds pushed all the paddle boarders north to around Deerfield Beach and the Palm Beach County line, extending their adventure before 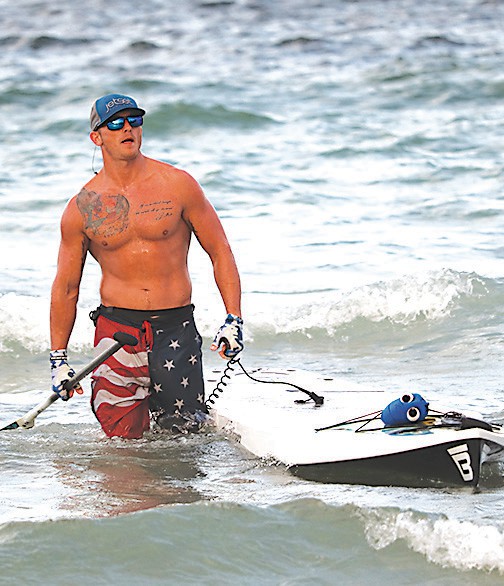 Josh was met by hugs and good wishes from all in attendance, but two of the most meaningful came when little Piper Suit ran up to place an event medallion around his neck to say thank you for his efforts, giving him a hug and a kiss. Piper was followed by 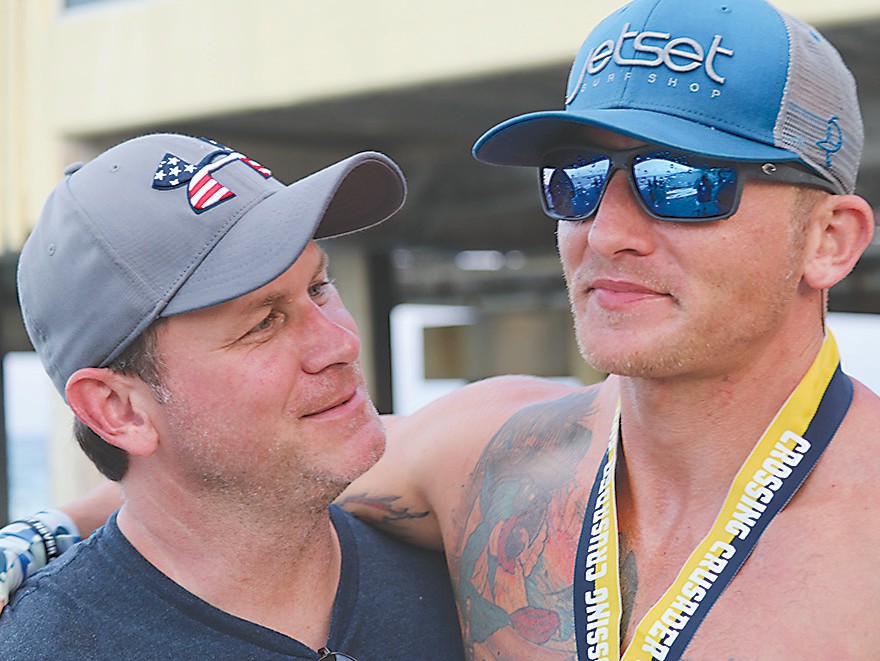 Josh’s mother, Mary Ellen Ferris who gave her son a long hug and beamed at him as only a proud mother could do.

Sergeant Brian Hood of theMarco Island Police Department was also onshore to meet his fellow officer, along with his wife Linda, as well as City Councilor Bob Brown who congratulated the weary paddler.

The paddleboarders begin to arrive.

was a tired and emotionally drained Ferris that would sit on the concrete bench at the back of the beach and reflect on the events of the day, speaking with friends and family that sat by his side. “I’m beat, I’m really beat,” Ferris said after the 68-mile odyssey on the water.

It would be his 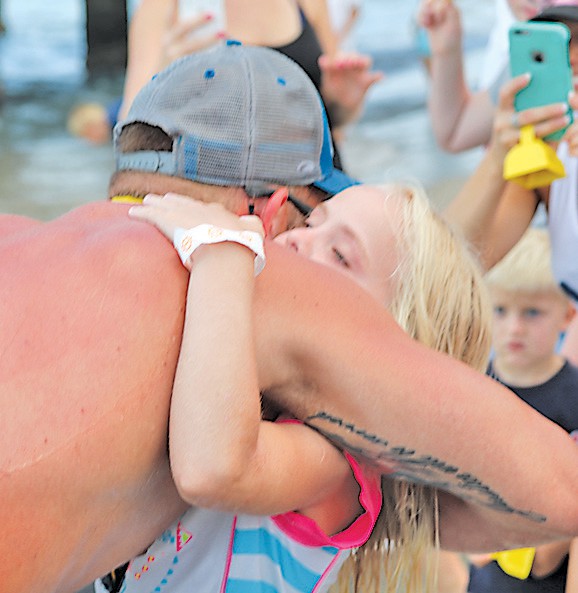 Piper gives Josh a hug, after his long journey.

cousin Mike, who flew in on Saturday morning from Atlanta to show his support, who would say it best: “We’re proud of you Josh.”

The event raised an astounding $125,000 from pledges, and more are expected. You can join in and help by visiting www.crossingforthecure.com and following the link to donate to the effort made by one of Marco’s finest to help fight this debilitating disease.