Going, Going, Gone! Extinction Rate is Faster Than Ever 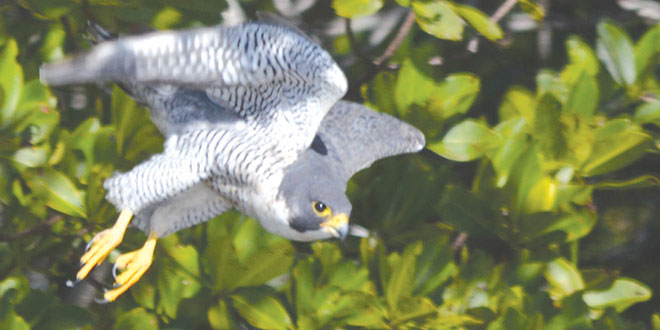 Peregrine Falcons are slowly rebounding after near elimination. PHOTOS BY BOB MCCONVILLE

“It is a folly to think that we can destroy one species and ecosystem after another and not affect humanity.” ~ Joel Sartore

A few weeks ago I was watching a morning news program that featured conservationist and National Geographic photographer Joel Sartore. He is flying around the world taking pictures of thousands of animal and plant species and he is in a hurry. He displayed a few photos taken in recent months, and those subjects are no longer alive. They are gone, and gone forever. Mr. Sartore is in a race against time to get as many endangered species on film before they become extinct.

According to some scientists there have been five mass extinctions of plant and animal life in the last 500 million years. Since the Earth was relatively new, from our current prospective, and still quickly evolving, the loss of life was caused by major events such as volcanic eruptions, naturally occurring climate shifts, asteroid strikes and other natural phenomena.

Many of us are familiar with the most recent major event that involved the loss of the dinosaurs about 60 million years ago. Conjecture that volcanic eruptions or asteroid strikes were the primary cause, the skies were darkened for months and the lack of light killed the plants. Next, plant-eating creatures were gone and so continued the chain. But this did make way for many mammals to evolve and diversify.

That was then and this is now. Many believe that we are in the midst of the sixth mass extinction. There has been a natural average extinction rate over time of about five species per year. Currently it is thought that the average is now more than 1,000 times the past rate, and dozens of species are eliminated every day.

While causes of previous events were naturally occurring, this time the reason lies squarely on one specific event- human expansion. As we continue to need more land for an ever-increasing population, we take what we want, not what we need, to satisfy our species. Habitat loss for other plant and animal life again creates a chain reaction that leads to fewer of those species. Our fantastic ingenuity has created chemicals to grow things bigger and quicker, but that chemical residual has a negative effect on the land and water.

For example, examine the Everglades. In less than 150 years nearly one-half of this necessary, pristine ecosystem has been changed or destroyed. Human expansion has altered the flow of waters here, which has affected the plant and animal life drastically.

The introduction of pesticides virtually eliminated the presence of the Peregrine Falcon east of the Mississippi River in the mid 1900’s, and the Bald Eagle became endangered at the same time.

As the Calusa, Aztecs and Mayans were introduced to the white race, their civilizations were also introduced to disease at the same time. The same principle applied as we expanded into the habitats of mammals, fish, amphibians, reptiles and birds.

Nobody knows for sure how many plant and animal species are becoming extinct. But we do know that as many as 25,000 species are currently catalogued just in the United States on that endangered list, and this represents about 15% of all plants and animals. Very simply, thousands of species may disappear forever and this could happen by the end of this century.

It’s frightening but it is true. Take those photos while the subjects are still here. Take a hike or a boat ride and appreciate the flora and fauna around you while you can.

Tomorrow may be too late!

Bob is a naturalist on board the dolphin survey boat Dolphin Explorer. He is a member of the Florida Society for Ethical Ecotourism (SEE). Bob loves his wife very much!