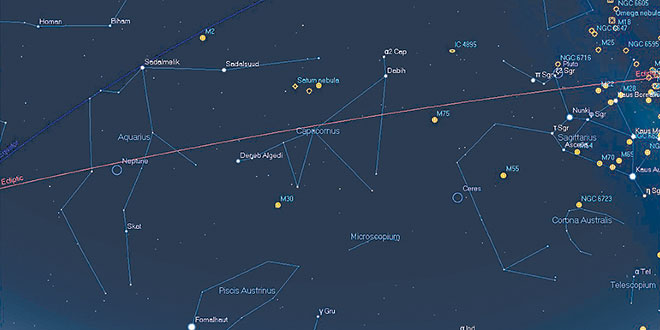 Tonight Capricornus, the goat, rides fairly high in the southeastern sky. It is usually visualized as a hybrid half goat – half fish creature; it’s also extremely old – it has endured essentially unchanged for over 3,000 years. Likely this is because of its great importance (to an agricultural society) as being the site of the winter solstice in the early bronze age. Nowadays the winter solstice occurs in nearby Sagittarius.

Capricornus is supposed to be the second dimmest of the zodiacal constellations after Cancer, but I don’t find it difficult to pick out in a dark sky site; certainly it’s easier than the very obscure Piscis Austrinus to its southeast. There is only one binocular object of note in the constellation – M30, a 7.5 magnitude globular cluster. Of course, being a zodiacal constellation it’s frequently the host of planets.

Speaking of planets, there are three in the sky right now, although two are so dim as to elude the unaided eye. In particular, Neptune is never visible to the naked eye under any circumstances, but it is easily visible in binoculars. Seeing Neptune in binoculars is easy, but identifying it among the multitude of 8th magnitude stars around it is not. There is no disk visible which would normally be a dead giveaway to its planetary nature; the planet is some 2,700,000,000 miles away after all! Luckily, it happens to be far from the Milky Way now or the task would be far more difficult. If you are interested in trying to find it, drop me an e-mail and I will respond with a chart. Neptune is currently in Aquarius, the water bearer, only a few degrees from where it was first discovered 170 years ago (it takes 164 years to go around the Sun!)

Aquarius is another dim zodiacal constellation a bit brighter than Capricornus, but I have always found it a bit more difficult to make out, perhaps because it is more spread out. Aquarius is usually depicted as a young man pouring a jug of water. In mythology the floods of the Nile would begin when Aquarius would dip his jar in the river. There is one deep sky object for binoculars in Aquarius – M2, at 6.5 magnitude it’s fairly bright for a globular cluster.

Dwarf planets Pluto and Ceres are both on the chart tonight as well. It’s totally hopeless to search for Pluto without a huge telescope, but like Neptune, Ceres can be spotted with binoculars. Somewhat brighter tonight than Neptune at 7.5 magnitude it should be in range of 7×35’s. Once again, if you are interested in tracking it down, drop me an e-mail.