Glory of the Grape – All Praise for Chef Laura 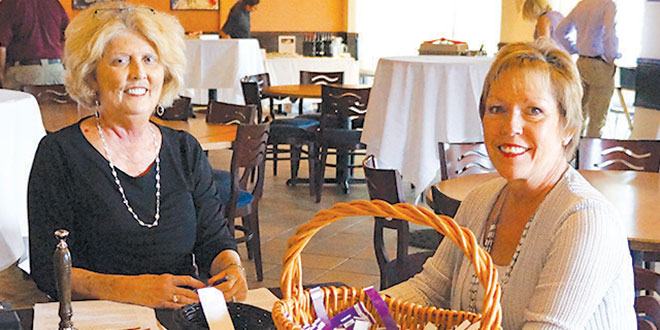 The Chamber’s Sandi Riedemann and Donna Niemczyk greet guests at the Glory of the Grape event on June 7.

There was no shortage of wine lovers at the annual Glory of the Grape event. And if you weren’t a wine lover on arrival, you were by the time you left.

The sold-out event, to benefit the Marco Island Chamber of Commerce, took place at CJ’s on the Bay on Sunday, June 7. Five stations were set up in the restaurant, where there were 16 carefully selected wines, paired with complimenting hors d’oeuvres.

CJ’s Chef Laura Owen had been planning the event for two months, tasting between 45 and 50 wines before making the final selections. Chef Laura tells us that the wines, from around the world, included some bottles readily available at Fresh 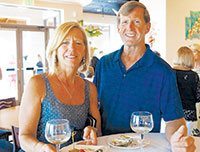 Ellen and Brian Frey, first time attendees, enjoy the Glory of the Grape on June 7.

Market and Publix, and others we would “likely never see other than here.” Chef Laura said that the event is about “getting out of her culinary box.” Her focus this year was on local products from Florida and the Gulf, such as the Anastasia Gold caviar from Evans Fish Farm in Pierson, Florida, the first farm in the United States to raise Russian sturgeon. Local cheeses from Cypress Point Creamery, Hawthorne, Florida were also showcased. 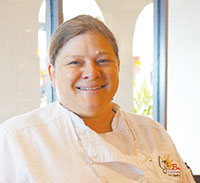 chowder on a tasting spoon, and the alligator boudin- a house-made white sausage. The seafood paired brilliantly with the light and crisp Acrobat Pinot Gris, from Oregon.

Some of the standouts included the incredibly tender farmhouse chicken and the gnocchi with roasted tomatoes and basil, described as “homey” by one of the guests, and paired with a rich red Sant’Antimo Corte dei Venti. Many guests enjoyed seconds of the local Florida cheeses, which were served with dates, figs and fruit.

One of the most interesting choices included a sparkling Laetitia Brut Cavee, which was cold, refreshing and clean, paired with Asian-inspired chilled summer rolls and edamame pot stickers. Vegetarian fare so tasty it left 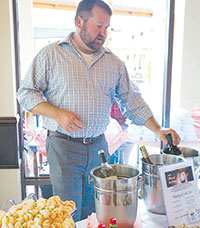 Greg Christensen from Premier Beveragemans the seafood station, a favorite at the sold-out event.

you not missing meat.

There was less talking than usual at the tables, where guests enjoyed the pairings. Conversations that did occur seemed to center on the food and drink.

Ellen and Brian Frey, self-described “snowbirds,” attended the event for the first time. Ellen, a confessed “wine lover” tells us husband Brian was being “broken into wine tasting” that evening.

Guest Pat Rutledge, joined by husband Ron, says “each year they raise the bar.” She particularly enjoyed the lamb kefta, its touch of cumin marrying beautifully with the bold flavor of the Columbia Crest H3 Cabernet Sauvignon. “They outdid themselves,” Pat says. 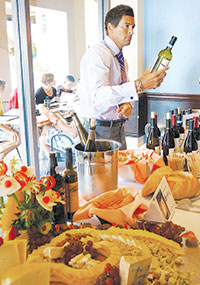 Local Florida cheeses were showcased along with the wines.

the Chamber’s executive director, says “CJ’s is always a great supporter of the Chamber and is willing to step in and help anytime.” This is the 6th year CJ’s has hosted the event for the Chamber. Jacquie tells us that the event “signifies the start of summer for us.” She adds “it is good to see locals come out and enjoy.” Reflecting on the sentiment of all that attended, Jacquie and Curt had “all praise for Chef Laura.”

At the end of the evening, a live auction, conducted by Sandi Riedemann, raised additional funds for the Chamber. Dick Shanahan, Chamber president, welcomed everyone and thanked them for attending. A photo booth provided a fun and lasting memento for guests.