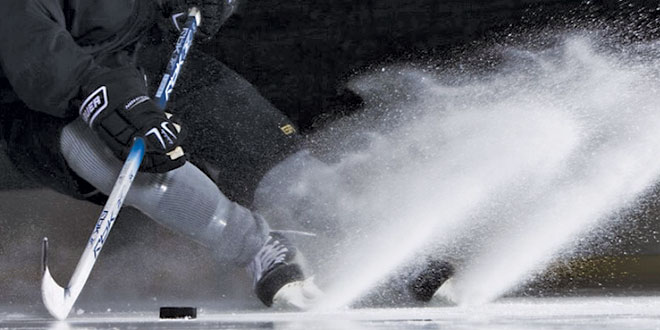 During the men’s final of the 2015 U.S. Open between Novak Djokovic and Roger Federer, early in the first set, Djokovic took a hard fall when attempting to change direction while on the full run.

Before the match began, in a pre-match player strength comparison chat session, Djokovic was given a check on his chart for the quality of his footwork and his speed on the court. The overall opinion of all of the analysts was that arguably, Djokovic was possibly the quickest player in today’s game.

So how can the quickest player, with the best footwork in tennis, lose his footing?

Pro players do specific training drills to enhance their ability to move well on all court surfaces. These days with the amount of spin and pace that pro players put on the ball, quick movement and radical change of running direction is vital to their performance. As crazy as it sounds, they are actually sliding on the hard courts! Because of the foot speed of the players, this maneuver is now becoming a regular occurrence in the game. However, it is also a threat to injury, simply from the fact that we are not supposed to be able to slide on concrete!

As I stated in one of my previous articles “lazy feet lead to lousy shots.” While the pros certainly do not have lazy feet, you do occasionally see them take a hard fall, simply because they are pushing the envelope and lose their footing.

As an instructor, in both tennis and pickleball, I find that with recreational/club level players, most injuries are from falling on the court. These falls are derived from two things: improper footwork and a macho attitude of “I am not going to lose this point!”

Trust me, I am very competitive when I participate in any sport. However, I am not competing for a grand slam title or millions of dollars in prize money and endorsements. It’s just not worth it to injure myself for an extended period of time, simply to win a point in a club match. Yes, I want to win, but sometimes I just need to say “nice shot” and go on to the next point.

Professional tennis players (as players in any top professional level of competition) are, as I stated before, “pushing the envelope.” They are not

Djokovic and Federer show their ability to slide, glide and be balanced on both clay and hard courts.

If you are a regular reader of my column, you are already aware that the Har-Tru clay courts we have here in Florida, because of the more granular make up of the material, along with the HydroCourt watering systems, tend to keep the clay surface moist. These style courts are really designed more to slow down the game and provide a softer/cooler surface to play on, rather than to promote sliding on the court.

The actual purpose of sliding on a clay court is that we are utilizing our feet as a breaking system, allowing ourselves to be more balanced before, during and after contacting the ball. The ability to successively do this, takes specific training in order to learn the proper way with which to slide both proficiently and safely. While most adult players don’t necessarily need to slide into their shots, we should still glide and slide with our feet when playing on a clay court . As an instructor, part of my advanced juniors training includes teaching the kids how to properly and effectively slide on a clay court.

Like a hockey player sliding to a stop on his skates, the same physics apply when we are sliding on a clay court. Proper weight distribution and balance between the upper and lower body allow us to slow down, or stop and change direction. Just like coming to a sliding stop on skates, the more balanced weight we apply on our feet, the more our feet dig into the court surface and the more we slow down.

When watching players like Djokovic and Federer, as they move on the court, whether they are sliding into a shot or not, it appears as if they are on hockey skates, gliding smoothly and quickly across the ice. The coordination of upper and lower body balance is phenomenal to watch. Their movement is catlike, as a panther or a cheetah chasing down its prey.

The difficulty in mastering this is that if we don’t apply a certain, different amount of pressure to each foot independently, while we are actually sliding on both feet at the same time, we are going to lose our balance, and like ice skating, probably catch too much weight on one foot, lose our balance and wipe out! 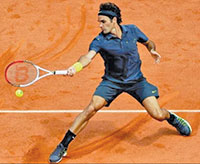 act without injuring ourselves?

As a child growing up, our house had a large den/family room with wood floors. My mom made sure they were always clean and shiny, which meant they were highly waxed and very slippery. I spent many years running around in my socks, sliding on these wood floors, just goofing off and having fun. As I began playing tennis, I had the privilege of training and playing on real crushed brick/terre battue red clay courts, which encouraged and reinforced me to slide like I had done on the wood floors in my den at home.

As a coach, I have taken this experience and adapted it to the training of my advanced juniors. I have two indoor racquetball courts at the MIRC, which have very slippery wood floors. I utilize them to teach these young players how to slide. The slippery wood floors, along with thick fluffy gym socks, provide a perfect environment for which to learn to slide. I utilize the lines on the racquetball court to teach them how to slide at different speeds and come to a stop at specific distances and areas on the floor. Once they have conquered the ability to slide on a slippery floor, sliding on a clay court is a piece of cake.

I am not saying we all have to slide into our shots on clay, but understanding the priority of overall body balance when hitting a forehand or a backhand will improve our strokes and reduce our unforced errors.

So when you are watching players on TV at tournaments like the French Open or the Monte Carlo Masters, where they glide and slide, appreciate the physical coordination and control of upper and lower body balance they are able to execute. There is a cadence and timing to their motion. Their fluid movement and balance is like watching ballet. It is truly a beautiful thing to observe.