Glenn Miller Orchestra, only the best! 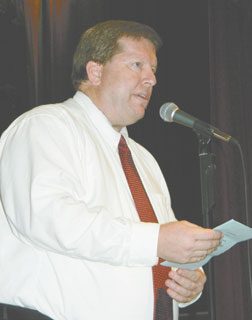 John Stein, Lely High School Band Director, introduced the Glenn Miller Orchestra at the latest in a long series of big band concerts he has organized at the school for the public.

The seventh song of the big band concert began with an extended progression of dissonant chords and for a few seconds the audience thought, “This is not the Glenn Miller I know.” But, it was. The piece was Serenade In Blue and it was quintessentially Glenn Miller as well as representative of the 1930’s big band music.

The audience was expecting jump tunes like “Pennsylvania 6-5000”, rhythm tunes like “In The Mood”, even novelty tunes like “A Tisket, A Tasket”. They got them, but they also got more. Glenn Miller and other musicians of his era continually pushed the edges and stretched the limits of music.

They gave their listeners what they expected and a lot more. We think of Chattanooga Choo Choo as a jump tune, but it begins with several measures of the entire band imitating the sounds of a train beginning its run. Think of it as a gimmick, or think of it as stretching the limits. It is both.

We’ve all drearily sung “The 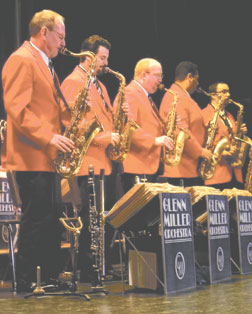 The saxes often took the lead as the Glenn Miller Orchestra treated their audience to the best of big band music. PHOTOS BY CARL KELLY/COASTAL BREEZE NEWS

Song of the Volga Boatmen” but as it was written for Glenn Miller, “Volga Boatmen” pushed the edges of music as a sassy jazz piece heavy with rhythm.

This was big band music of the Glenn Miller Orchestra and the audience at Lely High School on January 31st was treated to the absolute best of Miller.

Sabriana Cretella, a Lely band student and aspiring musician, who volunteered to work the house for the concert, well expressed her response, “I think the quality of sound is so pure.”

Kudos to Lely Band Director, John Stein, for providing big band concerts for several years. And the tradition continues. Tommy Dorsey Orchestra will play in concert this season at Lely High on March 20th at 7:00 PM, and the Glenn Miller Orchestra will return next year on January 27th.

Proceeds from these concerts are used toward the various costs of maintaining the Lely High School Band. The Lely High School Winter Band Concert will be February 27th at 7 PM. For information/tickets call 239-377-2091 or email steinjo@collierschools.com