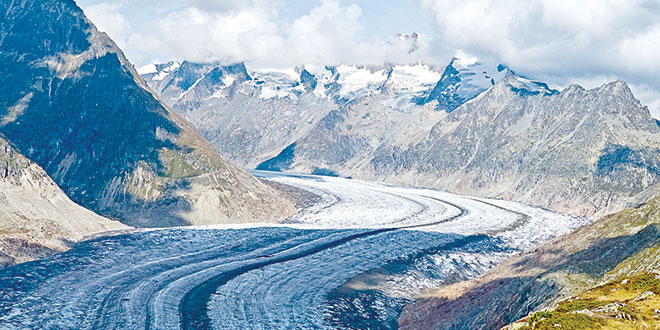 Further along the Aletsch; the black stripes along the surface are known as medial moraines, rick debris pushed along the sides of the streams of ice. PHOTOS BY VICKIE KELBER

Although I love a tropical climate, many of our travels have taken us to places noted for their glaciers. These visits have always occurred in the warmer months, for I would never venture forth in winter to an area capable of producing glaciers. Even my glacier skiing experiences were in the northern hemisphere in August.

Simplistically, a glacier forms when, over years, more snow accumulates in the winter than can melt in the summer. The mass of snow gradually turns into glacial ice. While new snow/ice is added to the top of the glacier, the bottom is slowly worn away in a process called ablation.

Due to ablation, there is constant movement under the glacier forming crevasses and blocks of ice (seracs) as well as changes in the terrain such as the build up of rock and soil called moraines and bowl like formations known as cirques.

There are glaciers in every part of the world except mainland Australia. Some of the world’s most visited glaciers are the Patagonian glaciers in Argentina, with Perito Moreno Glacier being one of the most popular. One of the more exotic locales for a glacier is on Mount Kilimanjaro in Tanzania. Unfortunately, the glaciers in this area have receded more than 80% and it is predicted that they will disappear in the 2020s. What would an aspiring Hemingway write about if he/she were to visit then?

Pakistan is home to possibly the longest glacier outside of the polar regions, the Baltoro in the Karakoram range of the Himalayas. I don’t know about you, but seeing that glacier is not in my travel plans anytime soon.

In China, the best known glacier is the Hulong in the Yunnan Province. New Guinea has glaciers

Alaska is home to thousands of glaciers including this one in Kenai Fjords National Park.

as does New Zealand where the Fox and Franz Josef glaciers flow down into a rainforest.

Norway boasts the largest glacier in continental Europe, the Jostedalsbreen. lceland’s Vatnajökull is larger, covering 8% of the country. The Vatnajökull has active volcanoes as well as hot springs within its caves.

Antarctica is a popular tourist destination, with Harker Glacier among the most beautiful ones there. So many people visit Antarctica that a special organization was formed in 1991 to establish guidelines for responsible tourism to that area.

In our country, Alaska has thousands of glaciers. Margerie Glacier in Glacier Bay, a popular tourist stop, is 21 miles long. The Hubbard Glacier between Alaska and Yukon Bay, Canada is one of the largest in North America; it is believed its retreat is increasing the number of earthquakes in that area. I find it interesting that the infamous Exxon Valdez oil spill occurred, in part, because the tanker had to change course to avoid icebergs formed by the retreat of the Columbia Glacier.

The Mendenhall Glacier in Juneau, another popular tourist destination, has lost 1900 feet since 1946. Since 1850, the largest glaciers in Glacier National Park, Montana have retreated by two thirds and some of the smaller ones are disappearing. As at the Mendenhall, the glacial recession in this park is rapidly accelerating.

Although miles long, the Canadian Rockies’ Columbia ice field has lost half its volume in the last hundred plus years, with notable acceleration since the 1980s. We will be visiting these ice fields this year, but not without a guide because it is so dangerous due to the melting.

The glaciers with which we are most familiar are those in Switzerland. If you count the minor ones as well as the

The popular Mendenhall Glacier in Alaska.

majors, there are more than 1500 glaciers in this alpine country. Switzerland is where we have gone glacier skiing in the summer as well as hiked to a mountain restaurant that no longer exists because that part of the mountain collapsed due to a retreating glacier. There is another glacier to which we hiked in about an hour’s time in the 1990s. When we returned 12 years later, it had receded so much that we hiked almost three hours and still were not able to reach it.

The largest glacier in Switzerland is the Grosser Aletsch which is the one visitors see when they make the long and expensive trip to the top of the Jungfraujoch. A UNESCO World Heritage Site, it covers about 45 square miles. Although still more than 14 miles long and 3300 feet at its thickest point, it is retreating about 100 feet a year and the recession is accelerating. On a hot summer day, the water that runs off it is equivalent to 60,000 liters (think 5,000 crates of 12 one liter bottles) a second. We first visited the Aletsch in 1991. I took pictures and then happened to see a photo in a magazine taken from the same vantage point in the 1940s. I was shocked to see the difference; the difference we noted on our most recent visit was even more alarming.

Studies from the Swiss Federal Institute of Technology have found that the rate of dissipation and disappearance of glaciers is rapidly accelerating. In the last 15 years, Swiss glaciers have receded by 20% and it is anticipated they will lose another 50% of their area in the next 30 years. The country is so concerned with its receding 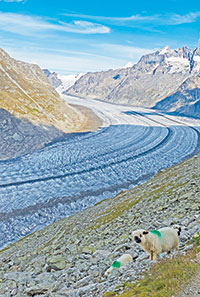 The Aletsch Glacier looking toward its origin; the sheep are marked with green paint to assist in locating them.

glaciers that there is a special website (glaciology.ethz.ch/messnetz/glacierlist.html) which lists all the major ones and an interactive chart showing the annual changes since 1880. Melting of the glaciers will have a devastating economic effect on the country. Obviously, tourism will be affected, but, more importantly, they will lose a critical water source. More than 50% of their electricity and 26% of their drinking water come from glaciers; not to mention the flora and fauna that will be affected.

Since 2005 in Switzerland and other alpine countries, a unique method is being attempted to try to preserve some glacial areas integral to the skiing industry. These sections are being wrapped in a layer of plastic foil that reflects heat and radiation. The hope is that this will preserve parts of the glaciers that are critical to the economy of these locales. One of the other sites employing this technique is Garmisch-Partenkirchen in Germany where it is feared the glaciers on the Zugspitze will disappear in the next twenty years. While somewhat successful in slowing the melt in the targeted areas, this approach is very expensive and cannot be used to sustain entire glaciers.

Not all glaciers are receding; in fact a very few are advancing, including the Perito Moreno. For many of the glaciers, however, think about planning a trip sooner rather than later.