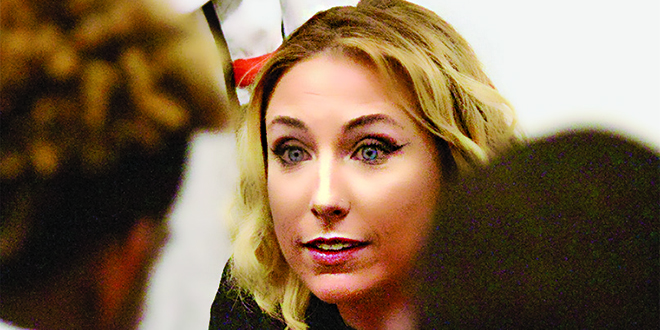 Lely boys’ JV Coach Taylor Bell during a timeout in a recent game.

It seems like nowadays in the United States most gender lines have been crossed, if not erased all together. Perhaps that’s what makes Taylor Bell’s story stand out.

Bell is the head coach of Lely High School boys’ junior varsity basketball team. There are probably other women who are head coaches of boys’ high school basketball teams around the country, we just don’t know of any.

Bell, the daughter of Bruce and Laura Bell, longtime co-owners of Rookie’s Bar and Grill on Marco Island, seems to be fitting in quite nicely in the male-dominated fraternity of high school boys’ basketball head coaching.

Bell has gotten an early start in the head coaching ranks. She is a fresh-faced college grad, in her first year out of Webster University in Missouri, where she played basketball. Her coach, Jordan Olufson, describes Bell as “someone who goes 100% all the time.”

It’s probably no coincidence that the Lely basketball program, led by varsity coach Jacques Fritz, plays with that same non-stop effort. It was Fritz who gave her the job offer she couldn’t pass up.

“I got an offer to coach the girls’ team at Marco Island Academy,” Bell said. “But being from Lely, I wanted to go to Lely, whether it was boys or girls.”

“That was one of the conditions I had in taking this job,” she said, “I didn’t want them to think they could walk all over me just because I’m a girl. From the get-go, when Fritz introduced me, he stood in front of the boys and said, ‘This is your new coach. I expect you to treat her the same way you treat me—with the utmost respect. I expect you to listen to what she says and to be coached the way she wants you to be coached. Because she’s obviously here for a reason. It’s because I want her to be here. And I want you to treat her the way you would me.’ And I’ve not had any problems, ever,” said Bell, who graduated from Lely in 2012.

Players Were Shocked, Referees Can’t Believe It
Just because Bell hasn’t had any problems doesn’t mean that her introduction to the team wasn’t a surprise to the 15- and 16-year-olds.

“They were shocked,” Bell said, “a couple of the kids were like, ‘She’s a girl. What in the world? This is different.’”

The boys on the team were not the only ones surprised to see a woman in charge of the boys’ team.

“Referees still ask me, ‘Are you the head coach?’ And some of them have been refereeing my games for the third or fourth time and they still ask me. Refs still can’t believe it.”

Bell encounters the same types of reactions when she talks about her coaching job to those outside of the basketball world.

But Bell is quick to deflect any glory that may come her way.

“I can’t even take credit for that,” she said. “I basically do what Fritz tells me. It’s all his plays. It’s all his everything. I’m just there yelling at them. The kids are just so talented. They pick up on it. They do what they’re supposed to do. Most of the time they just zone in and do what they’re supposed to do because they know next year they’re going to be his team.

“Eventually I want to be a varsity head coach. And Fritz has told me that people have asked for my contact information and for me to fill out applications. But personally, I don’t think I could leave Lely. So right now I feel I’m in the right place, being the JV head coach and assistant varsity coach. But I don’t know, maybe if I get that phone call I’m interested in I may go on to be a head coach somewhere. After high school head coaching, I’d like to coach in college. Maybe be a graduate assistant and get my foot in the door that way. I don’t know.”

Bell found she had to adjust from playing to coaching.

“It was different,” she said, “I found it very difficult to separate myself from a player’s standpoint to a coach’s standpoint. I always joked around with Fritz that it should be easy since I like telling people what to do and bossing people around,” Bell said with a laugh. “But it’s hard to teach them things that they’ve never heard of. Some kids don’t 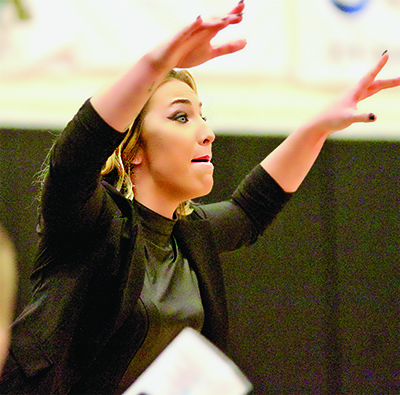 Photos by Scott Shook |Coach Taylor Bell is animated on the sidelines.

know that with a layup on the left hand side you’re supposed to go up with your left leg. It’s just things that I find to be so basic that some of them don’t understand. After the first month I started to get comfortable and the kids started to really focus in and hone in on what I was saying. It all flowed naturally after that.”

Dressing Style “Just Happened”
“That kind of just happened,” Bell laughed. “At first I had a Lely shirt and sweat pants—that kind of stuff. I don’t know why, but it just didn’t suit me as well. I see professional coaches and college coaches dressing more appropriately with the blazer and the jacket, the dress or the pants. And I thought, ‘You know what? That’s more my style.’ So I just went that route. And it just so happens we went on an eight game winning streak when I started dressing like that. I’m very superstitious, so when we won our first game I decided, ‘now I have to dress this way all the time.’ And we just kept winning and winning.”

Bell even wears high heels on the sideline.

“The refs joke around with me. They say, ‘Are those the new Nikes that just came out?’”

Bell doesn’t feel like she gets any different treatment from the referees.

“It’s actually kind of funny. At first they’re shocked. Then they’re like, ‘Hey be nice to me. You’re obviously here for a reason, so what do you say we just play nice.’ I’m like, ‘I don’t say anything to you.’ They definitely ref the same whether you’re male or female.”

Bell is all-in during the game. She has the sideline demeanor of a seasoned coach.

“I try to be,” she said, “because my kids feed off of me. I try to be positive, but intense. This last game I said, “I want to feel you. I want to feel that you want to win. I need to feel that.’ I feel like if you give it, you’ll receive it. I feel if I’m passionate about it, I’ll get the effort.”

Coach Fritz’s Mentorship
Bell’s relationship with Coach Fritz has had a profound influence on the young coach. Their relationship started when she was the captain of the Lely girls’ squad.

“He and I were pretty close,” she said. “When I was in school, Fritz helped me get into college. He helped me with my highlight tape. He helped me get in touch with some coaches. He helped me out. When the JV job opened up, Fritz gave me a call and said, ‘I trust you with this. Do you want to do it?’ I was shocked a little bit. I thought, ‘Wow, this is awesome. I’m for sure going to do this.’ I had to think about it a little bit, because it was a little different. Coaching boys, I thought, it was going to be a little tough. So I just said, ‘I’ll do it.’”

Jacques didn’t throw his young protégé into a sink or swim situation. His plan was to slowly ease her into being a head coach. But the learning curve turned out to be a fast one—thanks in part to a couple of highly dramatic games.

“In the beginning he was there with me step-by-step,” she said. “During the first few games he was there teaching, because this was a learning process for me. I had never coached before. He said, ‘I’m going to start out being at all the games. In the middle of the year, I’m going to sit on the bench and let you take over more. And toward the end of the year you’re going to be by yourself.’ I was like, ‘Alright, that’s fine.’

“So we started having all of these overtime games—and I got used to it. I fell into it pretty fast. But when we get into big games, like Mariner or Naples, the kids kind of get flustered a little bit. They start doing things that they normally don’t do. When he shows up they focus in more. And I appreciate him being there for that. Sometimes I get so into it that I don’t say the right things. So when he’s there he’ll tell them, ‘Hey, you need to focus. You need to do it right now.’ He’ll draw up specific plays that I probably couldn’t have come up with on the fly like that. He takes over in moments when he feels he needs to be there. And I’m more than happy for him to do that. I’m still learning. It’s my first year and there’s things I need to learn. And he’s there for that.”