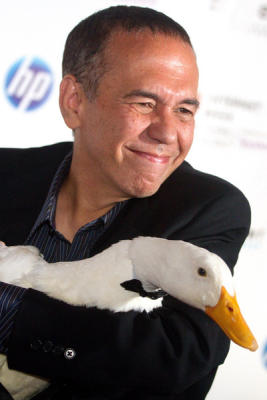 The bombastic, caustic and recently fired as the voice of the AFLAC duck because of outlandish Twitter comments Brooklyn’s own Gilbert Gottfried comes to Marco Island’s Capt. Brian’s: Off the Hook “Comedy Club this weekend for a series of six shows.

Gottfried started his stand up comedy career at the age of 15 and after only a few years was known as a comedian to watch and hear. Gilbert says his career is received generally favorable to most people but is best known for his crude satire, blue comedy, black comedy and insult comedy.

Gottfried talks about his stint on Saturday Night Live in 1980 with respect but says it was an uphill battle to be on that year as it was the transition year from the original Not Ready for Prime Time Players to the 1980 cast of besides Gilbert, Charles Rocket, Denny Dillon and Joe Piscopo.

People of all ages recognize Gottfried for the numerous voiceovers he has done over the years, which are listed here:

Shoedini- the shoe horn on a stick

What was surprising to me was Gottfried’s comment that people don’t recognize him on occasion when he isn’t in the character with the screechy voice and the squinty eyes.

Gottfried also appeared as a semi regular on Hollywood Squares and said he was thrilled to be on the show as he reminisced watching the original with Peter Marshall and Cliff Arquette and now he had the honor of being selected to be a “square”.

Fans of Comedy Central know Gilbert from his appearances on the Celebrity Roasts.

TV Credits include “ The Cosby Show”, The Tonight Show with Jay Leno and many appearances on “Howard Stern” and the documentary comedy “ The Aristocrats”; “Entertainment Weekly” said of the 101 comedians who appear , no one is funnier or more disgusting then Gilbert Gottfried!”

He has roasted among others, comedian Bob Saget, Joan Rivers and Donald Trump.

Gilbert  said he knows Marco Island is in season and invites the New York City folks to Caroline’s Comedy Club where he will be appearing on April 27 and to Barnes and Noble Booksellers located at Union Square on April 28 where he will be to promote his new book called “ Rubber Balls and Liquor”. He say’s it’s the punchline to a old children’s joke. I’ll take his word for it. Could be in the act.

You can follow the exploits of funnyman Gilbert Gottfried at www. gilbertgottfried.com

Gilbert also said to remind everyone that his show is 18+.  So keep that in mind when you reserve your tickets.

PS: He really is an intelligent and nice guy to talk to and I enjoyed the interview.