Getting ready for the Jewish High Holy Days 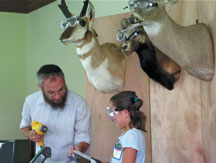 Rabbi Aharon Rabin shows one of his assistants the proper safety gear while his goggled friends oversee the process.

At the new Chabad Center that serves the Naples and Marco island area, children (and their families too) had the rare experience of making a personal shofar, and they had a blast! A shofar is made from a ram’s horn, and is the world’s oldest wind instrument, that is sounded to usher in the Jewish New Year.

Visiting Rabbi Aharon Rabin arrived with his traveling Shofar Factory that included his stuffed horned friends, baskets full of horns, tools, and a catalogue of comical stories that kept the children mesmerized and eager to begin making their own instruments. As dubious as they were at the beginning, by the end of the morning each participant had not only fashioned a shofar but had learned to blow it as well. Creating sound with the ram’s horn is not simply a matter of blowing it like a whistle, as everyone soon discovered: it requires a little patience and a motion similar to using one’s tongue to flick some particle off the lips, while expelling air.

The Rabbi explained that the horns used must meet strict criteria, coming only from horned, Kosher animals (chewers of cud having cloven hooves, killed in a painless fashion) and the horns themselves must be hollow. This somewhat narrows the field, as cattle are automatically out of the running because of their association with 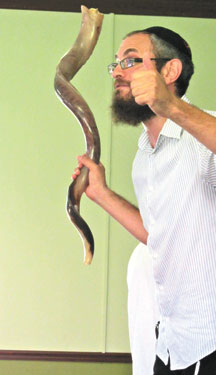 This shofar was made from the horn of an African antelope.

the golden calf in the bible. Rams’ horns meet all the demands and some have interesting curls and turns to make them more challenging.

It truly resembled an assembly line as children helped each other saw off the tip of the horn and then took their creations to the Rabbi who used his power tools to make the finishing touches. Each shofar was ‘road tested’ and then some children chose to coat theirs with a shellac-like finish.

Like so many Chabad events planned by Rabbi Fishel Zaklos and his wife Ettie, the Shofar Factory became a family affair with two and three generations of the same family participating: religious ritual is experienced, comprehended, and becomes a real part of daily life.

September 28. For the following two days, the Jewish New Year will be celebrated with families and friends meeting to share special prayers, and sweet festival foods to ensure sweetness in the New Year. As a Day of Judgment, it affords Jews a time to examine past deeds and ask forgiveness for their sins. It is a Day of Remembrance, as Jews recall the history of their people and pray for Israel. It is also the Day of Shofar Blowing, when the ram’s horn is blown to signal the beginning of the 10-day period 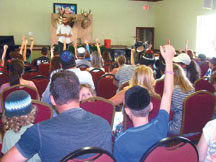 The Rabbi had his choice of volunteers to help demonstrate how to make a shofar.

Rosh Hashanah is observed the first and second day of the seventh month of the Jewish calendar, in the Fall season of the western calendar, usually in September or early October.

When families gather together for the holiday meal, traditional foods sweetened with honey, apples and carrots are served, symbolizing sweetness, blessings, abundance and the hope for a sweet year ahead.

The first night’s meal begins with apples dipped in honey. Challah, the bread usually eaten on the Sabbath (not braided as at regular meals but instead baked in a circle – a wish that the coming year will roll around smoothly without unhappiness or sorrow) is also dipped in honey before eating.

The ten days between Rosh Hashonah and Yom Kippur are known as the Days of Awe or Days of Repentance. After a week of introspection, seeking reconciliation with those you have wronged and penitence, Yom Kippur, the Day of Atonement begins 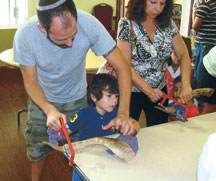 Sawing a horn required a lot of muscle, everyone soon discovered.

with the chanting of Kol Nidre on Friday night, October 7 at sundown. This very moving but unusual prayer asks God not to take into account any vows that are made: a total annulment of vows made to oneself. During Yom Kippur, one asks for atonement, the expiation of sin on the part of the sinner, and pardon, the forgiveness of sin by God.

On the day before Yom Kippur, some people perform a ceremony know as Kapporot, after which some form of charity is observed. It is considered a blessing to be able to eat well before Yom Kippur, for on the day itself there is a twenty-four hour fast. The purpose is to purify one’s thoughts and increase the intensity of one’s repentance. It is a day of serious contemplation and self-examination.

Yom Kippur services conclude at sundown, with a single blast of the shofar. Upon leaving the synagogue, one hears the greeting: “L’shana ha – ba-a b’Yerushalayim!” (Next year in Jerusalem) to which the person greeted replies, “Amen!”

Everyone then partakes in a light form of refreshment, to “break the fast,” hoping to be inscribed in the Book of Life for yet another year, for those who have repented for their sins are granted a good and happy New Year.