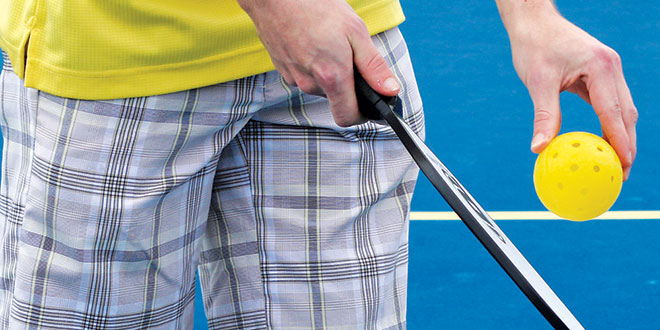 As the sport of pickleball grows and becomes more popular, I am seeing an unprecedented number of new players wanting to learn how to play the game. As in all sports, it is important to learn proper fundamentals from the beginning, so we do not have to reprogram and correct old, bad habits!

In the sport of tennis, holding serve and breaking serve are a vital part of the game. Breaking serve, and then holding our own serve definitely, affects the outcome of a set or match. In pickleball this fact is even more important. Remember, we are only able to score points when we are serving, and we only get one serve opportunity to get the point started! So holding our serve is crucial to the outcome of the game. This makes confidence in our serve a very important part of our game. Having a fundamentally proper serve motion is a requirement in order to have that confidence.

In the rules of tennis, when serving, you must stand behind the baseline and serve from either the deuce (right side) or ad (left side) and serve the ball cross-court to the service box. The ball must be struck out of hand before it bounces. The same is true for pickleball. However, in pickleball we are not allowed to hit the serve in an overhead motion. The serve must be underhand. There are specific restrictions as to the proper execution of the motion, which are defined by the USA Pickleball Association (USAPA).

4.A. Serve Motion. The serve must be made with an underhand stroke so that contact with the ball is made below waist level (waist is defined as the navel level). (Revised Feb. 1, 2013)

4.B. Server Position. At the beginning of the serve, both feet must be behind the baseline. At the time the ball is struck, at least one foot 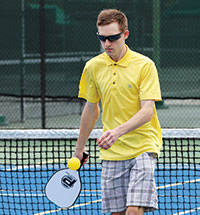 Rule 4.A.1 is specific in its definition and its purpose. It prevents the server from being able to utilize an overhead motion for serving, simply for the fact that a player could easily ace the returner on virtually every serve. The server is also restricted from serve and volleying, in that the serving team must let the ball bounce on the return before striking it.

Accomplished tennis players use what is known as a continental grip for their overhead serve. This grip has the “V” between the thumb and pointer finger directly on top of the grip and top edge of the racquet.

This is the grip that we would actually use for hitting a forehand in pickleball, (a subject I will cover in an upcoming column), so let’s get back to the subject of a pickleball serve.

Because we are required to serve underhand, we need what is referred to as an eastern backhand grip. In a proper eastern backhand grip, the top of the knuckles of our four fingers are located on the top edge of the paddle. This grip is used in tennis to hit a topspin backhand using the backside of the face of the tennis racquet.

The eastern grip is a bit of a challenge for beginners to conquer and become comfortable using. The eastern grip, while being an option for hitting a forehand, is a must for having a good serve in pickleball.

Advanced pickleball players always utilize the eastern backhand grip for serving. They also utilize it to impart under spin on the ball when hitting forehands. The under spin is used to either take speed off the ball, or to direct the ball in an arching flight path for added control of the shot.

l advise all beginner and intermediate players to use a continental grip for all of their forehands. However, they must learn to use an eastern grip for serving. As players become more comfortable and confident in the eastern grip, they can begin to experiment using it to apply under spin to certain shots with their forehand.

Now that we understand the necessity of the eastern grip, let’s review the serve motion. 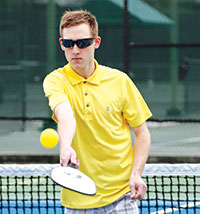 As stated in Rule 4, we must strike the ball below the waist. The motion is a lot like releasing and rolling a bowling ball down the alley. We want our arm to go straight back, and then straight forward. We want to hold the ball slightly off to one side of the top of the ball, and strike the ball directly out of our hand, just as we release it from our fingers. We want the paddle face square and flat to the ball at contact, and have a good long follow through, with our weight finishing on the front of our front foot. We also want to hold our follow through, like a good bowler, until “Bam!” – the ball hits the pins and we get a strike!

Our goal should be to have a very simple, consistent serve motion, with a very high percentage (I’m talking 90+%) of serves in. Remember, we only get one chance to serve and get the ball in play, no double faults.

Wayne Clark is a certified professional tennis instructor with over 25 years experience coaching players on all levels of the game. Wayne is also qualified in pickleball instruction. He has been the head instructor at the Marco Island Racquet Center since 2001. The Racquet Center offers clinics, private and group lessons for both tennis and pickleball. Coach Wayne’s Island Kids Tennis juniors program runs year-round, and has classes for players from kindergarten through high school.

Contact Coach Wayne by email at  WClark@cityofmarcoisland.com, by phone or text at 239-450-6161, or visit his website at www.marco-island-tennis.com.

The Racquet Center has open rotational pickleball play for all levels, as well as tennis round robins on a daily basis. Please contact the Racquet Center at 239-394-5454 if you are interested in participating.