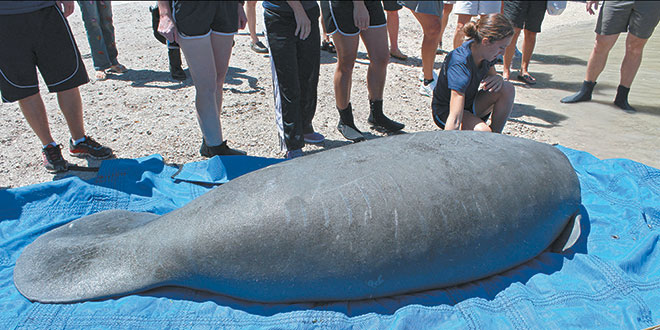 Photos by Samantha HustedFollowing her full recovery from brevetoxicosis, this manatee is ready to be released.

On April 7th, Rookery Bay in congruence with the U.S. Fish and Wildlife Service and the Tampa Lowry Park Zoo released a manatee on Shell Island Road in Naples. The manatee in question was a 1,000-pound female who was rescued back in January after falling critically ill due to the effects of red tide, or harmful algae bloom. While red tide is commonplace in much of Florida and the Gulf of Mexico, its impact on wildlife can be devastating.

“The animal was showing signs of brevetoxicisity. It was having facial seizures, was unable to swim and ended up beaching itself,” said Dan Levine of the Manatee Rescue Research Program.

Collier County has recently been hit with a wave of red tide. The most common species of the microscopic algae is called Karenia brevis or K. brevis. K. brevis produces brevetoxins which in turn can affect the central nervous systems of marine life, eventually leading to death. Brevetoxins can also affect humans when it 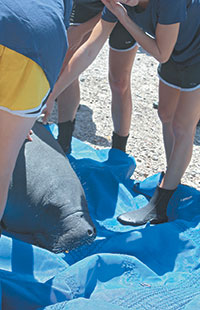 This female manatee was rescued, rehabilitated and released.

is released into the air and can cause respiratory issues.

The Manatee Rescue and Research Program picked the animal up off of Keewaydin Island. The program responds to calls from the Florida Fish and Wildlife Conservation Commission (FWC) hotline. In general, most of their calls are in regards to manatee mortality. They often recover carcasses and perform necropsies on them in order to determine cause of death. But every once in a while, like this instance, they get a call in regards to a sick manatee that needs to be rescued.

After picking up the manatee, the team sent it off to the Tampa Lowry Park Zoo for rehabilitation. There they quickly cleared its system of the harmful toxins, allowing the manatee a speedy recovery. But before an animal can be released back into the wild a few things need to be considered to ensure the best chance for survival.

“Due to the time of year the animal was rescued, the water was cold and it 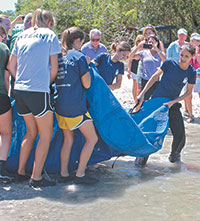 wasn’t really near any warm water sites,” said Levine. “Then we also had red tide in Collier County. So we monitor all those things before we decide it’s okay to release a manatee back into the wild. We waited for the water to warm up a little bit and for there to be no red tide cell counts in the area. Then we try to release them to as close as possible to where they were rescued.”

The boat ramp off of Shell Island Road is not a bad place to be released. It’s a little cove surrounded by mangroves and bright, warm water. It also doesn’t get much boat traffic, another danger for manatees. With the help of about 15 people from the various organizations they were able to lift the manatee out of the van and into the water where, after catching her bearings she swam off into the reserve.