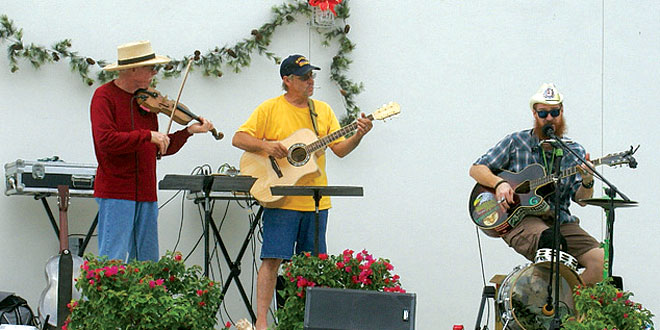 JRobert, Robert of the Bridge Trolls and Gator Nate joined up to jam together. All the musicians volunteered their time for the event.

It was an extraordinary affair. Two days of music, arts, crafts, food, ice sculptures and a park filled with holiday decorations. The above barely defines the joy had by all at the Goodland Civic Association’s Fourth Annual Holiday Bazaar.

MarGood Harbor Park was the locale for the affair held on the weekend of November 16 and 17. Nearly 60 vendors shared their creations with hundreds who passed through the park. Delicious food was available as well as fresh fruits and vegetables and flowers. Ten musicians from the area volunteered to play music throughout both days, and dozens of Goodland residents volunteered. They sold t-shirts and raffle tickets, guided parking, helped vendors set up early in the morning, volunteered for night security, used golf carts to transfer people from the event to their cars and greeted vendors.

Connie Fullmer, Noreen Seegers and myself, the Holiday Bazaar Committee, decided to make some changes from years past, and everyone loved it! The location, the date, the music and the amount of vendors went above and beyond your average arts and crafts fair. The weather even cooperated – for the most part.

The Goodland Civic Association raises money through events such as the bazaar and a number of pancake breakfasts throughout every year. The non-profit organization works within 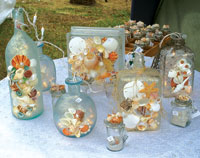 These beautiful shell embellished bottles and blocks that glow with white lights were created by Goodland resident Judy Wittwer.

the community and establishes effective communication with local governments. Its purpose is to promote the general welfare of Goodland, promote community spirit and good will. The GCA works closely with the Goodland Scholarship Fund as well as the Goodland Arts Alliance, collaborating and creating events such as the bazaar.

The GCA couldn’t be more grateful to everyone who participated and came to the event.

Food vendors included Mrs. Mac who served up a number of tasty versions of macaroni and cheese along with pulled pork and collared greens. Beach Dogs and Kirk McFee’s Dog Stand took turns serving up hot dogs to guests. Fresh fruit and vegetables were also available for purchase.

The most exciting food event took 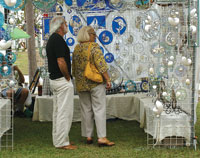 place at the Marker 8.5 food tent, which served up beef, grouper and shrimp sliders… and a pretty special surprise. Owner Chef Michael Duncan, created two ice sculptures each day, using only a chainsaw and raw talent. Pretty cool, huh? (Get it?)

Beer and wine were for sale at “Chuckle’s Bar,” a stand set up in remembrance of the bar of the same name that once serviced MarGood when it was a functioning mobile home park. Many enjoyed the alcoholic beverages as they perused the park. I even enjoyed a few beers near the end of the day, thinking fondly of the time when I sat at Chuckle’s with its peanut shells on the floor, live music and Captain the parrot squawking away!

Others enjoyed the fresh squeezed lemonade and funnel cakes available. No one left hungry or thirsty, that’s for sure!

The GCA offered two raffles throughout the weekend – a 50/50 and a Grand STAYCATION package. The Staycation included a two-night/three-day stay at Marco Island Marriott Resort and Spa, a sunset cruise from Dreamlander Tours, a dinner for two at the Snook Inn and two tickets to the Marco Players. On Tuesday, November 19, the winners of the two raffles were announced at the Goodland Civic Association’s monthly meeting. 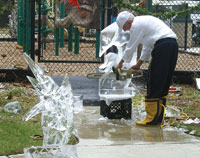 was Christina K. according to the ticket. With her phone number attached, she was notified the following day of her big win of more than $100! The grand Staycation prize went to Mike Blasacci of Naples. The Staycation was beautifully wrapped, sitting in a sparkling red wine chiller as well as including a holiday candle and a huuuuuge peppermint stick! (Sorry, I was just at the dealership…)

Many hung their heads at the meeting when their name wasn’t called. Why wouldn’t they? It was a great package.

As the park continues to be utilized for art functions between the GCA and the GAA, the town is beginning to build a name as a community of artists, adding to the village’s small but diverse presence. Goodland is a historic fishing village, now known for its stone crabbing industry. It’s a place to have a genuine good old style Florida experience, especially on Sundays. It is a town of folks who come from different backgrounds, ethnicities, financial status and talents of all kinds. Everyone gets along (for the most part, of course), and everyone accepts one another just the way they are. This includes their artful talents of every kind. The Holiday Bazaar was fun, fabulous, funny at times and all for a good cause. It was truly an affair to remember!