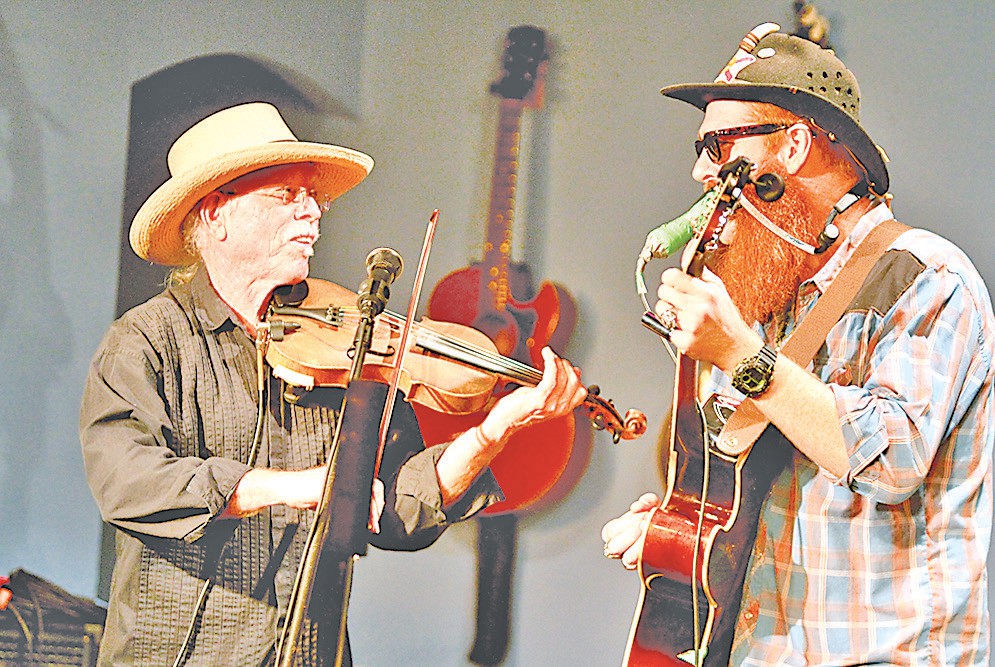 “Gator Nate” Martin captured the crowd the moment he bounded onto the Marco Players’ Theatre stage on Monday night, July 17—and he didn’t let go.

Wearing sunglasses (the lights hurt his eyes), a black hat with Gator Head written across the brim, topped by the Florida state flag and Yosemite Sam, Gator Nate immediately had the receptive crowd clapping and singing along during his first number. Such was the start of week seven of JRobert’s 13-week odyssey known simply by his growing audience as the Florida Songwriter Showcase.

A week earlier Roy Schneider, accompanied by his wife Kim Mayfield, presented a much different vibe. Schneider, who developed a cult following with his syndicated comic strip, “The Humble Stumble,” worked 13 years to become syndicated in the newspaper comic world before chucking that dream to concentrate on his musical career. Schneider, who has achieved fame with Americana albums that have reached number one and number three on the charts, presented an act that drew from a songbook featuring songs were written in Florida, but weren’t necessarily 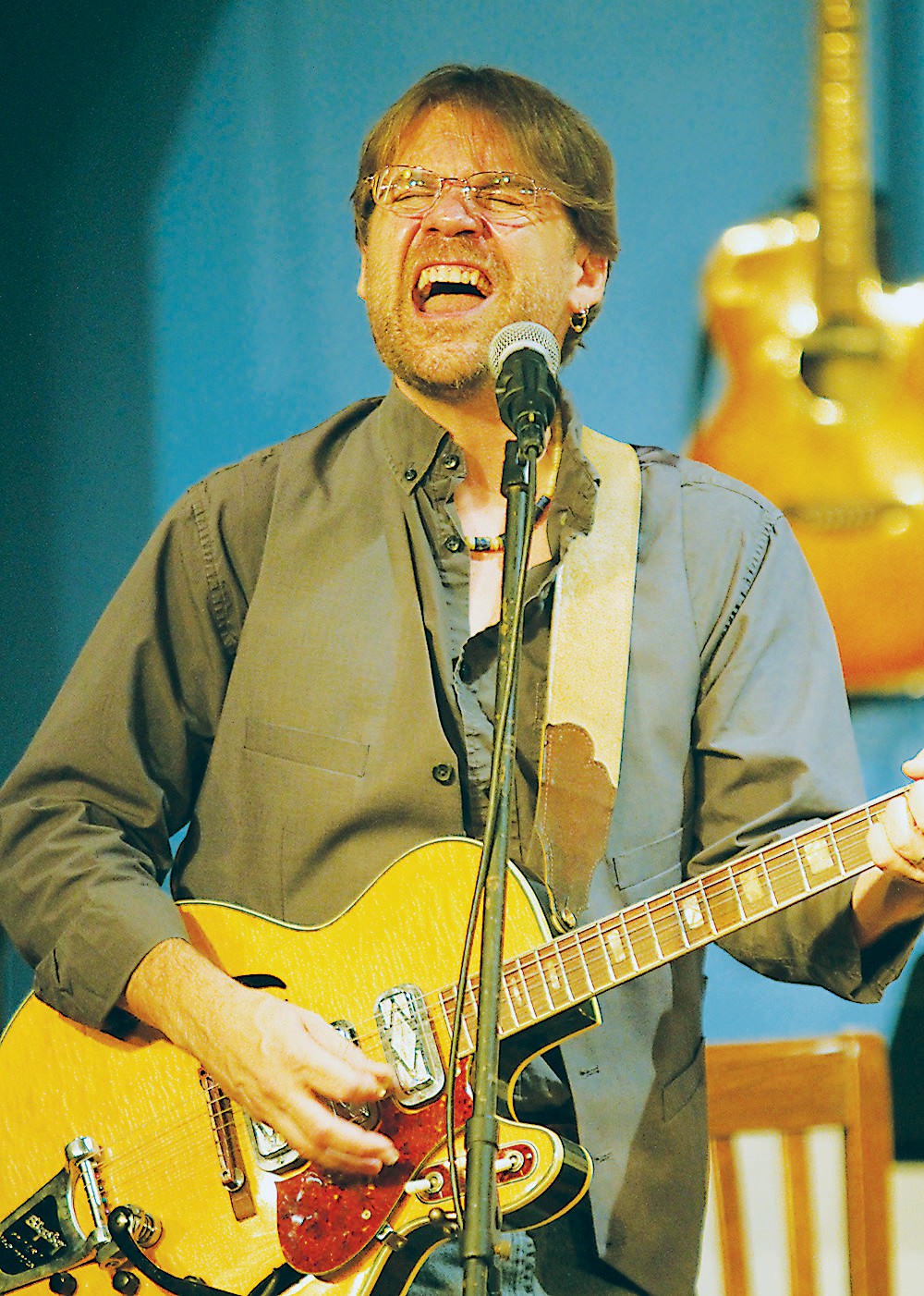 The nationally famous television show “The Voice” noticed Schneider’s talents and invited him to compete. Though he failed to “turn a chair” after performing in front of judges Adam Levine, Christina Aguilera, Cee Lo Green and Blake Shelton, he saw a side of the music industry few ever experience.

Schneider shared with the Marco Players’ Theatre audience how he was sequestered for two weeks, plopped in front of the judges to play his song, then unceremoniously ushered out of the building after failing to sufficiently impress the judges.

He said he was not allowed to write a song about the experience, so he came up with a metaphorical version instead. His veiled nod to The Voice was perhaps his most captivating performance of the evening.

“Gator Nate” was a big hit with the local audience. Though his garb and deportment might make one imagine that he was born in a tropical hardwood hammock in Big Cypress and raised by the Seminole or Miccosukee tribes, Martin’s true roots are much closer to the stage he was 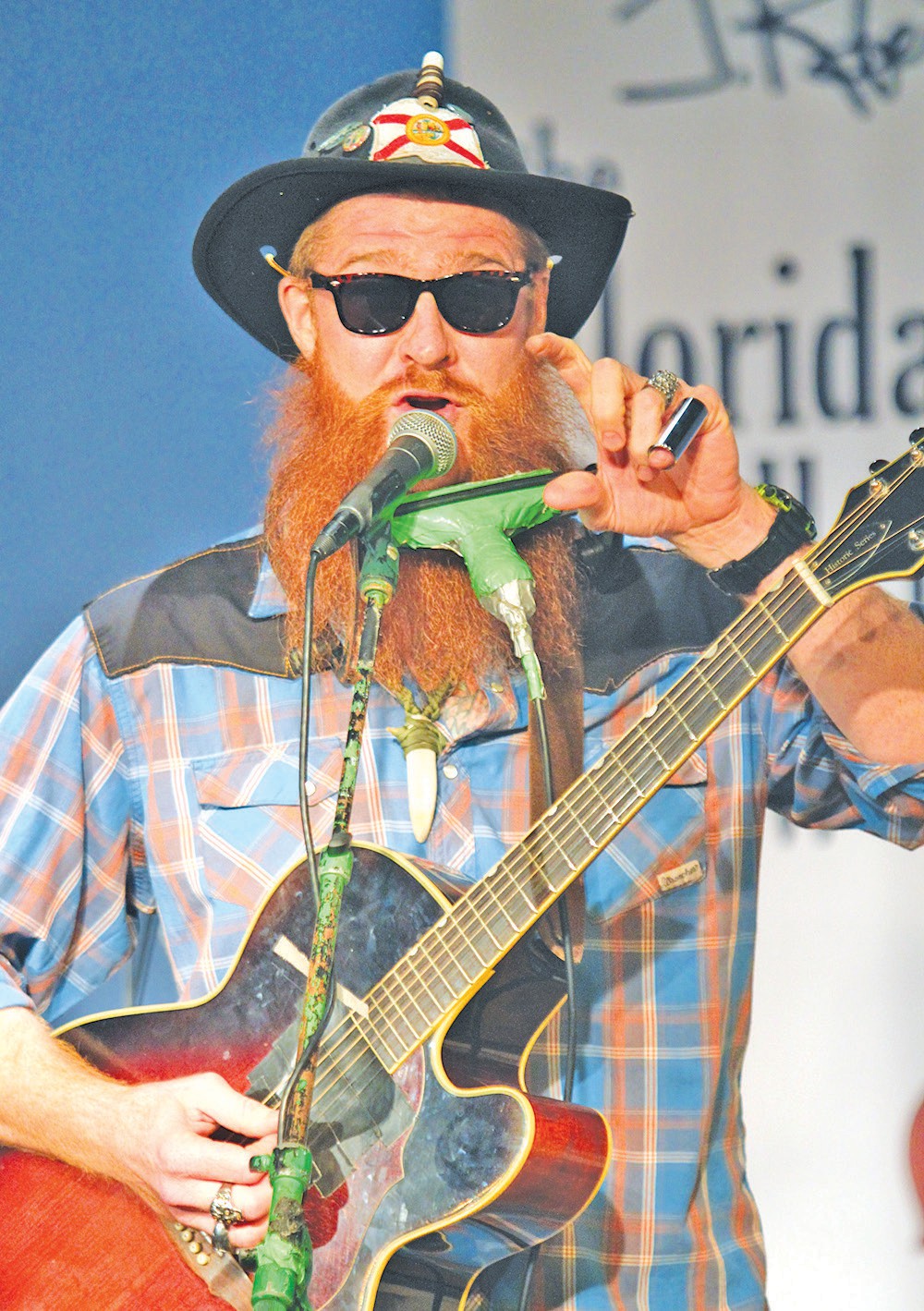 The audience enjoyed Gator Nate’s stories as much as they did his songs.

“I’m from right here on Marco Island,” Martin said. He grew up on the island and graduated from Lely High School in 1996. “There’s not much to write about Marco Island,” he said when asked about the Everglades bent to his songwriting. “But there’s that whole world out there in the Everglades and Everglades City. I love it.”

Gator Nate had two showstoppers in his set. The first was a poignant story about Mama Hokie (Clara McKay), who for years operated a stand along U.S. 41 in Big Cypress National Preserve that was identified with a sign that read BEER, WORMS. Gator Nate’s song tells of Mama Hokie having her hand bit off by an alligator (true story) and of her free spirit.

The second was a clever story about a girl named Honey who worked at a Waffle House and produced three children with three men and left his buddy for “the GM of an IHOP.”