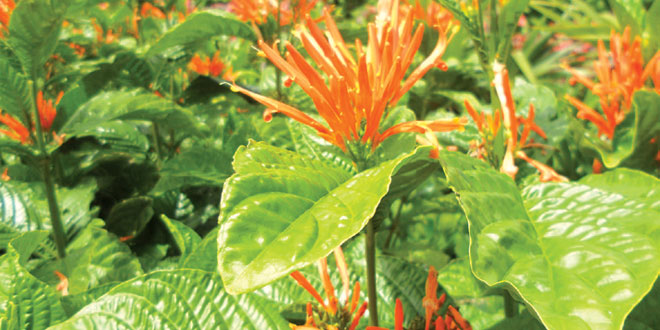 Shrimp plants are becoming very popular in South Florida gardens. I don’t know if it is because of their colorful bracts with tubular white flowers that seem to explode out of the top and sides, or if it’s that the flowers look like the pink crustaceans so many of us Floridians consume by the pound every year. Whatever the fascination, they are great plants; unique and wildlife friendly.

For those gardeners who are not familiar with these little beauties, first let me tell you that they are drought tolerant and can take the summer heat and humidity. Still not convinced? How about that most of them bloom year round. Shrimp plants are also butterfly and hummingbird magnets. When planted in mass, like everything else, they definitely make a statement. 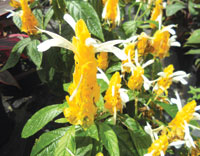 shrimp plant. I was surprised they did not have the same genus. The yellow shrimp (Pachystachys lutea) is probably the best known and can be found at most nurseries. The yellow shrimp can grow four to five feet tall here in Florida, but has a tendency to get leggy, which can be remedied by cutting it way back once a year. It will flush back out quickly. You can also plant new young plants in the front of the older, leggy ones. The latter makes a huge statement in the garden, but severely cutting it back usually produces more blooms and stronger stock. This is one of my favorites.

The other option is the red or pink shrimp plant (Justicia brandegeana). It will grow into a nice, full shrub but does not get four to five feet tall, like its cousin the yellow shrimp.

There is also a white shrimp (Justicia fulvicoma). The blooms have white very erect bracts with small purple flowers popping out along the sides of the flower stem.

Then there is my new favorite: the orange shrimp plant (justicia spicagera) or commonly called orange plume. It will grow into a five to six feet tall shrub. The blooms are BRIGHT orange and explode away from the plants like the fourth of July fireworks display.

Fruit cocktail (Justicia brandegeana) is another shrimp plant that has appeared in nurseries in the last few years. The bracts are a yellow-green with red to pink flowers popping out of the sides of the bracts. I’ve had mine for a couple of years and it has only grown about three feet high.

Still another is King’s Crown (Justicia carnea). This plant is another shrimp that is smaller size and works well 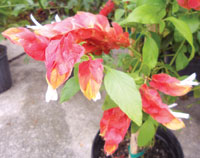 as a border plant. It really stands out because of its upright, full, pink clusters of flowers which bloom on and off several times a year.

All shrimp plants will do well as container plants as well as in the garden and they like to be fertilized a few a times a year. I have read that they prefer sunny locations but I personally have had better luck placing them in a lower light, not shade (as if you could find shade in Florida).They also perform well in our sandy soil.

Pests: Shrimp plants have a few insect problems, some scale but not enough of a problem to deter one from planting these beauties.