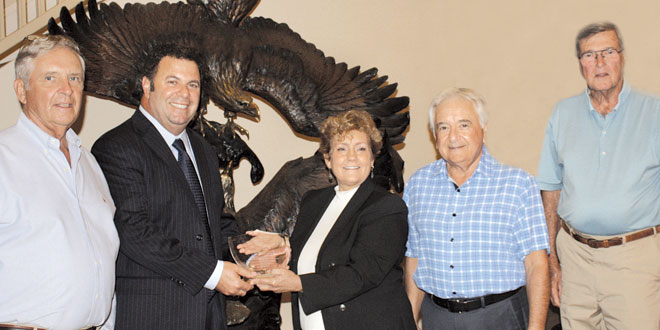 It was a night of honor and recognition for two members of Marco Island’s community. The Second Annual Galahad Award reception was held on Thursday, November 7 at Mutual of Omaha Bank. Those in attendance were kept in suspense as to the recipient of the award until the very end, but were also surprised to hear of a second award to be given for excellence in teaching life-saving techniques.

Collier County Commissioner Donna Fiala opened the ceremony, welcoming all in attendance and explaining the definition of the Galahad Award. “The Marco Island Fire Rescue Foundation, Coastal Breeze News and Mutual of Omaha Bank began this tradition last year to honor those within our community who show a sense of bravery and initiative in an emergency situation. Not much different than the legend of Sir Galahad, the noblest of knights of King Arthur’s Round Table,” she said. 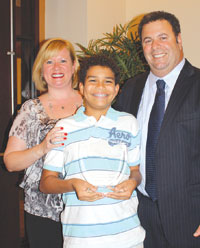 during a crisis situation – much like this year’s recipient. It is incredibly exciting to know that citizens like him and our recipients this evening exist within our community.”

As Ms. Fiala stepped away, Dianna Dohm, President of the Marco Island Fire Rescue Foundation, came forward to introduce the Galahad Award for Education to Marco Island Charter Middle School Physical Education Instructor Cheryl Toth. “For fifteen years Cheryl Toth has taught CPR and First Aid to students at Marco Island Charter Middle School. As the Physical Education instructor, she has been teaching and certifying students since the school’s second year in existence. Over the years, she has taught over 1,000 students the Heimlich maneuver, infant, child, and adult CPR, basic first aid and the use of AED’s,” stated Dohm. 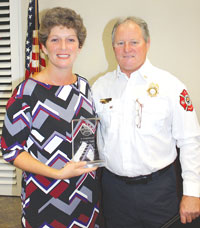 Cheryl Toth was given the Galahad Award for Education. She stands with Division Chief Don Jones who has worked on educating MICMS students with Toth for many years.

of students is probably more like 1,500,” added Jones as he praised Cheryl for her hard work and dedication to her students. “As far as I know, there is no other program like this in the area,” he added. Both Dohm and Jones were able to give examples of students taught by Cheryl who were able to utilize their life-saving skills.

A standing ovation was given to Cheryl who was incredibly thankful for the award as well as to see so many friends and familiar faces in attendance on her behalf.

Congratulations to Cheryl Toth for her dedication to teaching First Aid and CPR education.

Fire Rescue Captain Chris Crossan spoke to introduce the Galahad Award Winner. He first spoke on behalf of Chief Murphy who was unable to attend the reception. Murphy’s sincere words described the 2013 Galahad winner as gracious and humble, both traits of Sir Galahad. Crossan continued to give his own speech, adding that he, like Murphy, was personal friends with the recipient. Crossan recalled being on the scene when 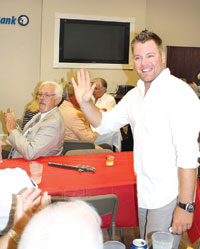 the 911 call came in to the station declaring the emergency at hand.

During the standing ovation, Carole Roberts, who nominated Bid, stepped forward to say a few words. “I am alive today because of his heroic actions. While having dinner at the Island Country Club last winter, food became lodged in my throat. I was choking and couldn’t breathe or speak. In my panic, all I could do was jump up and wave my arms,” she explained. “Luckily for me, Bid was there. He immediately came to my aid and performed the Heimlich maneuver.”

“In the movies, it seems that it takes just one quick compression of a choking person’s chest for the food to be released. Not so in real life. In my case, it was an exhausting process: Bid had to repeatedly squeeze my chest, while I was panicked, and while we were surrounded by worried family and

friends, and many observers.”

Roberts continued to explain how her experience led her and her husband to both be trained in CPR and First Aid. Roberts arranged a class for members of Leadership Marco, utilizing the free classes provided by the Marco Island Fire Rescue Foundation. The events that evening also led the staff at the Island Country Club to become trained as well.

“I am truly fortunate that Bid was fully trained at the time of my crisis, and had the courage to take charge and implement what he had been taught. I can never thank him enough,” said Roberts, turning to him adding, “you are my hero.”

As graciously as previously described, Bakkar accepted the award with a modest and sincere smile while his son sat grinning ear to ear, proud to see his dad – his hero – be awarded as such.