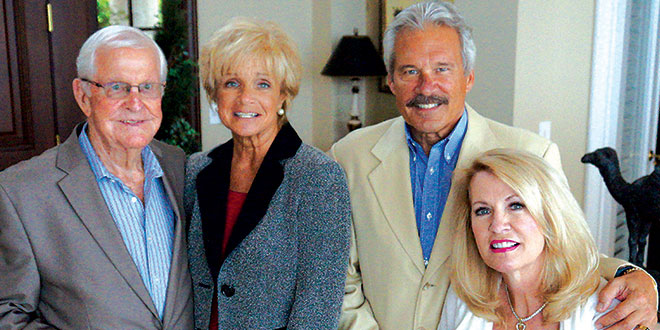 From left: Dick and Debra Shanahan, co-chairs ACS Imagination Ball, with Bill and Karen Young, this year’s recipients of the Grado Award. PHOTO BY JESSICA HERNSTADT

Every year the local office of the American Cancer Society holds a gala, one of its main fundraisers supporting the non-profit organization’s ultimate goal: to end cancer.

This year’s gala, the Imagination Ball, takes place Saturday, March 5, 2016. The elegant affair will be held at the Marco Island Marriott Beach Resort and Spa, and already it promises to top last year’s award-winning gala. The event theme, “Wash Away Cancer,” seems perfectly suited to the beach setting. This beach event, however, is black-tie optional, and expect to see many evening gowns and tuxedos.

This year’s gala honorees are Marco Island philanthropists Bill and Karen Young. The disease has personally touched the couple, most recently, when Karen was diagnosed with breast cancer. The Youngs are longtime supporters of the American Cancer Society and its life-saving mission. At the gala, the couple deservedly will receive the Grado Award, named after John and Corrie Grado, Marco’s ACS office founders.

Imagination Ball Co-chairs Dick and Debra Shanahan, along with dedicated gala committee members and volunteers, have worked tirelessly for months to ensure that the event will be successful, as both a fundraiser and a magical evening for guests. Every detail of the gala has been carefully planned, from the fine dining and spirits, to the lavish décor and the music. A silent and live auction promises luxury for lucky bidders.

We asked Co-chair Debra Shanahan a few questions to learn more about the Imagination Ball.

Why is the American Cancer Society’s annual gala so important to you and Dick?

It’s very important to Dick and me to be part of this amazing event for the 4th year. We have both lost family members to cancer. (Me: my sister and grandmother. Dick: his brother.) Every year we either lose another friend to this disease, or someone we know and love is fighting for their life; some with good results, others not. Being involved in the ACS Imagination Ball and imagining a world without cancer gives us the opportunity to pay it forward, and somehow be a small part of, one day, finding a cure.

How will the American Cancer Society use the funds raised at the Imagination Ball?

Funds raised this year will go to research. The American Cancer Society saves lives by helping you stay well, helping you get well, by finding cures and fighting back.

What can Imagination Ball guests expect?

This year guests can expect no less than they’ve experienced previously with a prestigious gala on the shores of the Gulf of Mexico in the Marriott Beach Pavilion. We’ll have numerous, high-end silent auction items, along with a few exceptional live auction packages.

Tickets for the Imagination Ball are still available, but they are selling out quickly. To reserve your tickets, go to www.acsimaginationball.com or call the local ACS office at 239-642-8800.