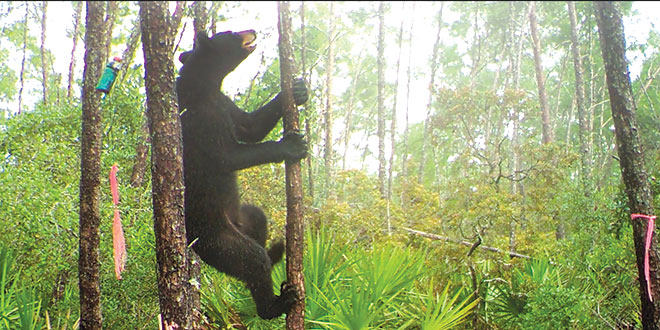 The Florida Fish and Wildlife Conservation Commission (FWC) continued its long-standing, proactive approach to bear management at its meeting in Sarasota on June 24. FWC Commissioners approved several bear-related rules that address a wide variety of tools to manage bears.

In summary, Commissioners approved changes to strengthen the wildlife feeding rule. Commissioners also approved changes to the bear conservation rule, which include a permit program to authorize landowners to remove a bear causing property damage under certain circumstances. These changes also allow the public and trained security personnel to scare bears with less-than-lethal methods in appropriate situations without a permit. As a small part of FWC’s management of bears, Commissioners also approved a very limited bear hunting season in limited locations.

The Commissioners asked staff to continue focusing on educating people about the repercussions of feeding bears and how to co-exist with bears to minimize conflicts.

“Education is key. We know that bear feeding is an issue, so we need to continue to be proactive and responsive with our efforts,” said FWC Chairman Richard Corbett. “Properly securing garbage and other attractants is the single most important action for reducing conflict situations with bears.”

“The FWC will continue to perform its role to educate the public, provide technical assistance, remove conflict bears, manage bear populations and enforce feeding prohibitions,” said Dr. Thomas Eason, director of the Division of Habitat and Species Conservation. “The problem of unsecured waste needs to be addressed by bringing together local officials, along with waste service companies, to work together with FWC to resolve this problem in a cost-effective manner.”

The Commission also passed final rules to establish a bear hunting season in late October within four of the state’s seven Bear Management Units (BMUs). The units that will have a hunting season contain the largest bear populations and include all three national forests as well as southern Florida.

This year, Florida’s bear hunting season will open Oct. 24 and will last at least through Oct. 25, but could run as long as seven days ending on Oct. 30, depending on if and when a BMU’s bear harvest objective is met.

Bear hunting permits will cost $100 for residents and $300 for nonresidents. Hunters will be limited to buying only one permit, which will allow the harvest of one bear per permit.

The same methods of take and shooting hours for deer will also apply to bears, but hunting bears with dogs or over bait is not allowed. On private property, game feeding stations may continue to be used as long as the feed is what is typically used for deer or hogs. To harvest a bear on private land, both the hunter and bear must be more than 100 yards away from any game feeding station.

Hunters will be required to take harvested bears to an FWC check station within 12 hours. Information will be collected at the check stations from each bear that will be used to inform the FWC about the local bear population. The new rule also makes it illegal to sell any parts of a bear or its hide.

MyFWC.com/Bear provides information about Florida black bears and how to avoid conflicts with them. Please report any threatening bear behavior to the FWC Wildlife Alert Hotline at 888-404-FWCC (3922).

Visit MyFWC.com/Bear for information about Florida black bears and how to avoid conflicts with them.