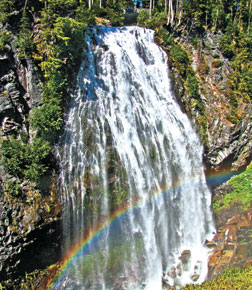 One could easily remain occupied for an entire week in Seattle, but there are some excursions from the core of the city that provide great opportunities as well.

The outlying neighborhoods of Fremont and Ballard, easily reachable by bus or car, are fun to explore.

An eclectic neighborhood whose residents refer to it as “the center of the universe”, Fremont is known for its unorthodox sculptures, funky shops, restaurants, and the Theo Chocolate Factory that offers tours. Two of the more amusing sculptures are the giant troll crushing a VW under the Aurora bridge and the statue of a group of people waiting for a train that never comes; locals often dress the people in various costumes.

Ballard is also known for its shops and restaurants, and worth a visit are the Hiram M. Chittendon Locks, botanical garden, and the Ballard Fish Ladder. People of all ages are fascinated as they watch pleasure and commercial boats negotiate the lock system. The locks help maintain the water level of Lakes Union and Washington and aid boats in moving from the lakes to Puget Sound while preventing the mixing of fresh and salt water. The fish ladder helps salmon make their way from the salty Puget Sound to inland freshwater. There is an underwater viewing gallery where the various types of salmon are visible. When we visited, Chinook salmon were prevalent. We also learned how to tell the difference between hatchery and wild salmon. In hatchery salmon, the adipose fin is clipped. This is a second smaller fin behind the predominant dorsal one. Wild salmon have the two fins;

The Boeing Assembly plant is, by volume, the largest building in the world.

those from a hatchery have only one. Good to know if you ever go salmon fishing in Washington!

About a half hour car or tour bus ride from Seattle is the Boeing Assembly building which offers 90 minute tours from its Future of Flight Aviation Center. By volume, the plant is the largest building in the world. When we were there, the 787 had just been certified and we were able to see this innovative “Dreamliner” being assembled. Be advised that no cameras, cellphones, or pocket books are allowed on the tour and if handicap accessibility is required, notification should be made in advance.

Ferries are a way of life for many in the Seattle area. To experience a bit of that life, regular ferries operate to Bainbridge and Blake Islands. Without a car, one can visit downtown Winslow on Bainbridge Island with its shops, restaurants and three local winery outlets that offer tastings. During select weekends, with a car, the wineries throughout the island are open for tours. Tillicum Village, the Northwest Coast Indian Cultural Center and restaurant offering traditional salmon bakes, is located on Blake Island.

For a longer ferry experience, the larger of the San Juan Islands can be visited. These ferries leave from Anacortes, 85 miles north of Seattle. The Victoria Clipper also offers passage from Seattle waterfront to the San Juans, as well as whale watching cruises in that area.

On clear days, Mt. Rainier, the highest peak in the Cascade mountain range, is visible from downtown Seattle. The most heavily glaciated peak in the lower 48 states and actually a stratovolcano, Mt. Rainier about 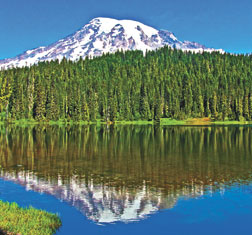 90 miles from Seattle makes a good day or overnight trip. There are five entrances into Mt. Rainier National Park, although the Nisqually is the only one open all year round. Sunrise is the highest point in the park, offering incredible vistas on clear days. There is a visitor center at Sunrise with displays, naturalist led walks and programs, as well as telescopes. Paradise, so named because when its alpine meadows below the peak were first viewed by the daughter in law of early settler James Longmire, she exclaimed “this must be what Paradise is like”, is THE place to visit. The park’s main visitor center with an interpretive film and helpful rangers is located here, as is the National Park Inn and restaurant. Some excellent short and longer hikes including one to a waterfall and one to a glacier originate here.

We chose a crystal clear day to visit the park and the views were spectacular, somewhat reminiscent of our alpine adventures in Switzerland. The only downside was that the area had received record breaking snowfall the previous winter. Spring had been long in coming and the wildflowers, usually at their peak at the time we visited, were only starting to bloom. The fear was that they were so delayed many would not bloom at all as winter comes quickly to the Cascades.

A somewhat shorter trip option with impressive views of the peak is a visit to Crystal Mountain ski resort where a gondola travels up 2500 feet; not only Mt. Rainier, but Mts. Adams, Hood, and St. Helens are visible on clear days. There is 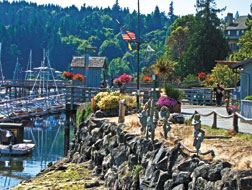 a restaurant at the summit. And, speaking of Mt. St. Helens, Mt. St. Helens National Park, two and a half hours south of Seattle, has viewing areas, hiking trails, and a visitor center.

Without a car? Gray Line and other tour companies offer day trips to Mt. Rainier National Park with time at Paradise to take a short hike or just enjoy the visitor center and restaurant. Gray Line also runs trips to Crystal Mountain and Mt. St. Helens.

Want to travel further afield? Explore the Olympic Peninsula. Olympic National Park has mountains, forests, and coastline with unspoiled beaches and distances between areas can be long. Nearby native American reservations offer scheduled visits and events. The main visitor center is located in Port Angeles, 77 miles from Seattle.

The Olympic Peninsula gets about 140 inches of rain a year, so no visit would be complete without seeing the Hoh Rain Forest. A temperate rain forest, it’s huge trees, mosses, ferns, and thick air create a magical fairytale like environment. Summer has less rain but more bugs! Recently, interest in this area has increased as the Twilight book series is set in Forks, the starting point for access to Hoh. For fans of the series, the Chamber of Commerce offers setting information and there are organized Twilight tours.

Vickie is a former member of the Marco Island City Council and Artistic Director of the Marco Island Film Festival, and has been a volunteer for many island organizations. She is presently on the board of the Naples Mac Users Group. Prior to relocating to Marco, Vickie served as a school psychologist, Director of Special Services, and college instructor.