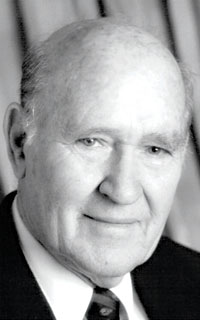 Funeral services for Bedford Biles, 92, will be held on Saturday, Aug. 10, at 10 a.m. at Hodges-Josberger Funeral Home, 577 E. Elkcam Circle on Marco Island.

Biles was born on Jan. 31, 1921, in Stanley County, N.C., and moved to Concord, N.C., where he was a high-school football star. He then went to Duke University on a football scholarship. The team played in the Rose Bowl, which was played in Durham in fear that the Japanese might bomb the Rose Bowl in California.

He returned to Duke from the service, where he met his wife, Fay, who was a freshman at Duke. The Durham papers had headlines, “War Hero Returns to Duke.”

Fay Biles remembers she had to go see a war hero. She asked who he was, and he asked who she was. They had been married 64 years.

Biles on graduation went to work as terminal manager of Roadway Express Trucking Co. in Akron, Ohio. He then became district manager, and then a consultant to travel nationwide to help Roadway terminals solve their dock problems. He quit and went to the University of Akron’s law school. Biles retired to Marco Island in 1989.

Biles left Duke as a sophomore to join the 101st Airborne Parachute “Screaming Eagles” 501 unit and carried 10 pounds of explosives on each leg. They jumped at midnight before D-Day.

He made jumps in the major invasions in Holland. He was in Bastogne, known as the Battle of the Bulge, where the Army said “nuts” to the Germans telling them they were surrounded and should surrender. The sign leaving Bastogne read, “Bastogne, Bastion of the Battered Bastards of the 101st Airborne Division.”

He jumped in Alsace-Lorraine in France and then moved on to the Bavarian Alps, when the war ended near Hitler’s headquarters called Berchtesgaden.