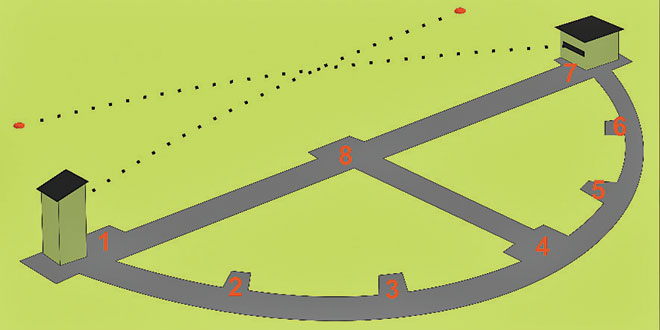 As an instructor and competitor in both tennis and pickleball, I have noticed a difference in how these two games are played. Here at the Marco Island Racquet Center, both sports are mostly played as doubles.

As I watch games and matches being played, I see a significant difference when observing tennis in how much, or how little, all four players are participating in the point as compared to pickleball.

The fundamental strategy of all doubles in both sports is for players to work together as a unit. Even though the two sports are very similar, I observe that tennis players are not always working as a team or a unit. However, in pickleball, both players are working in unison to win each point.

There are several reasons for the discrepancy between the way doubles is played in these two sports.

Number one is the size of the court itself. The basic fact that a pickleball court is approximately 1/2 the size of a tennis court simply makes it easier to get to the net. As we mature in age, our speed and mobility seem to lose a step or two. The tennis court becomes a large area to cover. Even at a young age, serve and volley tennis is an exhausting effort.

Doubles in both sports should be a team effort. When watching tennis, I see four players on the court, but it looks like it is two separate singles matches being played! Most points are crosscourt baseline rallies. Tennis players generally don’t make an effort to approach the net unless they are required to do so by a short ball from their opponent. The size of the court just makes it more difficult for tennis players to attempt to get to the net and finish off the point!

In pickleball, strategies require all players to play out the point up at the net. This naturally provides a better format for all four players being involved in the point at the same time. Also, because of this fundamental strategy, we spend the majority of our time during a point utilizing the no volley zone, aka the kitchen, which over a period of time naturally makes us more comfortable, confident and aggressive in this position.

I have had several of my students who are both tennis and pickleball players comment that since they have been playing pickleball on a regular basis, their net game in tennis has improved and that they now, generally just feel more comfortable and confident playing up at the net!

In addition to the size of the court, the strokes themselves in pickleball are just simply easier to hit than they are in tennis. It is easier to make solid contact with a small paddle than with a 27-inch racquet. A pickleball is not traveling as fast and does not have the amount of spin and rebound off of the court surface as a tennis ball does.

While executing a proper dink in pickleball is a shot that takes a good deal of practice at which proficient in proper execution, half volleys

How big is a tennis court?

and drop shots in the game of tennis are much more challenging to master and execute. Also, the serve motion in pickleball is much easier to conquer than the service motion in tennis. In addition to all this, with proper court positioning in pickleball, we should not have to hit as many backhands as we do in tennis.

All of these things combined are why pickleball has become such a popular sport. The learning curve, as I call it, is not a steep as it is in pickleball as it is in tennis. The fundamental strokes of pickleball can be conquered in a short period of time.

Unfortunately, I see in both sports, that at beginner to intermediate level play, a majority of points are being won and lost on unforced errors, which are usually related to improper stroke fundamentals and bad strategic positioning. In all sports, mastering and executing proper fundamentals can win you a lot of points and simply make the game more fun to play.

In the sport of golf, just as tennis and pickleball, it is important to make sure your grip, as well as the efficiency of your swing/stroke, are as fundamentally sound as possible. In all three of these sports, one wrong technique can lead to an array of mistakes and problems.

There is a lot of well intended advice to be had from those I refer to as “weekend warriors.” And while this advice may be well intended, it is quite often wrong. It is important that whatever activity you decide to participate in, you benefit from spending time with a trained professional.

I recently decided to take up the sport of clay target shooting. While I am proficient in handling and shooting firearms, I decided that to become as good as I could possibly to be in clay target shooting, that I needed fundamental training from a qualified instructor. The instructor showed me proper stance for shooting, as well as how to lead the target, depending on which angle and direction it was being thrown from. The fundamentals I learned have made my time shooting a much more enjoyable experience, because I am doing it the right way…and hitting more targets!

I am a big believer that an informed consumer is a dangerous customer. So my recommendation is, whatever activity you decide to participate in, seek out the advice and instruction of a trained professional. Make sure you have proper fundamentals in both technique and strategy. Both your game and your partner will benefit from your commitment to improve yourself.