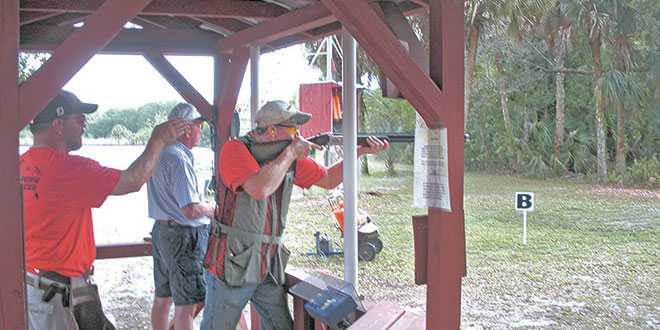 Nolan Leboeuf summed up the attitude of the participants in the 6th Annual Shoot Down Kids Cancer fundraiser for the American Cancer Society – Marco Island.

“It feels great,” said Leboeuf, who was part of a team representing the Marco Island Marriott Beach Resort, Golf Club & Spa. “Anything you can do to give back to cancer research is a great thing. I wouldn’t have it any other way.”

Held recently at Gulf Coast Clays in Port of the Islands, 80 shooters in 16 squads took part in the clay target shooting contest supporting pediatric cancer research that is Shoot Down Kids Cancer. The 80 participants represented a sell-out, which is the norm, said Lisa Honig, the Florida American Cancer Society’s senior manager for distinguished events for 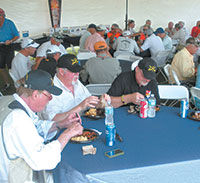 A team of veterans who served in the A Troop, 4th Squadron of the U.S. Army’s 12th Cavalry during the Vietnam War were among the participants.

the region extending from Marco to the Tampa area.

“It’s one of the biggest fundraisers of the year for the cancer society and certainly, one of the most fun, with all the guys and gals out here shooting,” she said, with the muffled sounds of shotgun blasts providing an auditory background. The proceeds from the silent and live auctions were more than $40,000, all of which will go to fight cancer.

“Every dollar goes to the mission of supporting research and cures for cancer,” she added. “It’s really important and we appreciate everything that everybody does.”

Known as “sporting clays,” the sport is designed to simulate hunting, with participants moving between stations arranged in a course. At each of the 15 stations at Gulf Coast Clays, the clay targets are

Some of the awards for the top finishers at the 6th Annual Shoot Down Kids Cancer fundraiser.

mechanically hurled into the air at heights to simulate the movement of rabbits, birds, deer and other commonly hunted animals.

Another member of the Marco Marriott team, Kevin Gladish, said it was his first time doing any shooting in 12 to 13 years and he was pleased that he was able to hit quite a few of the clays. He was also pleased with being able to “get away and support the American Cancer Society.”

As his teammate, Steve Lawrence, said, “It was a great time out there.”