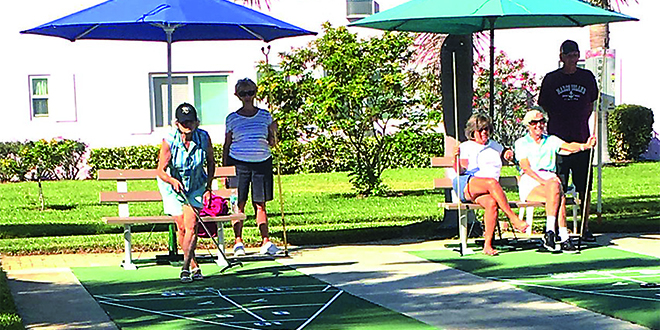 On March 22, a beautiful Wednesday afternoon, the residents of Seabreeze South sat mesmerized as the two finalist teams duked it out for the championship in the Annual Shuffleboard Tournament.

It all started at 9:30 AM, when 20 women and 20 men making up ten games began the competition. As teams were eliminated and other teams made it into the next round, the morning progressed.

At noon, with four teams left in the competition, it was decided to break for lunch, a delicious buffet with hamburgers, potato salad and all the fixings. Sally Doyle headed the group of ladies that put the buffet together, and Joe Mazzoni grilled the hamburgers.

Then promptly at 1 PM, 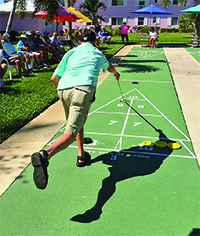 Rodger Robare shoots the puck down the court.

After what seemed like the longest game in history, the winning team finally reached its goal, and Rodger Robare and Janet Gorman became the new champions, with Nancy Forest and Joe Mazzoni the runners-up. Trophies were presented to both teams.

Ice cream and cake was served to everyone in the crowd, marking a fitting end to another perfect day on Marco Island.

Event organizers Caroline Price and Jack Sullivan, expressed thanks for the many volunteers who helped with scorekeeping, judging, puck waxing, preparing food for the buffet and cleanup.