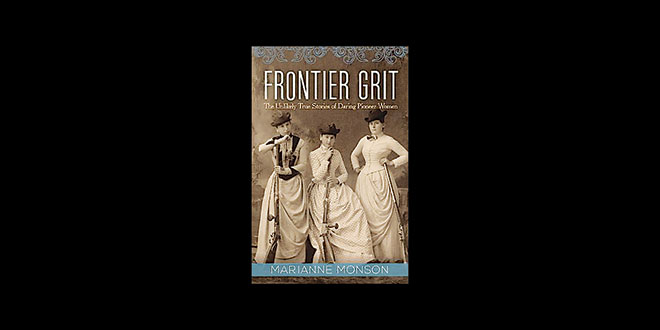 This little nugget is a delightful find and carries quite a punch for a small book. The stories of 12 fascinating women will captivate you while exposing you to the history they did not teach us in school.

The author purposefully chose 12 women of different nationalities, ethnic backgrounds, and socioeconomic status, to illustrate the diversity of the American West. Contrary to what our history textbooks and the Hollywood movies claim, white males were not even half the true story of the West much less the whole story. Monson wants to help correct that distortion. She hopes that by understanding the severe restrictions on women in the 19th century, modern women will understand how much we owe those who came before us, and understand what they were risking by pursuing their goals. They faced physical hardships and legal barriers that no longer exist for us. They endured unfathomable personal losses but clung either to faith in God, in life, in themselves, or simply refused to give in and give up.

I would love to summarize the story of each of these remarkable women for you, but the publisher wouldn’t give me the entire page! Some were authors who used their way with words to tell a female perspective on topics; some were illiterate but found other ways to make themselves understood. Some were political firebrands, bent on the women’s vote, against the women’s vote, for property ownership, for temperance, against temperance, etc. Just like today, women of the West were varied in their interests, concerns, and viewpoints.

Mother Jones, one of the most famous women of the frontier, endured the loss of her entire family – all her young children and her husband within a very short period of time. Instead of giving in to depression and despair, she set about to make her life meaningful. Abigail Scott Duniway was a staunch suffragette and insisted that “obey” be removed from her marriage vows.

Martha Hughes Cannon was also a women’s right activist, a medical doctor, and the fourth wife of a Mormon polygamist. She ran on the Democrat ticket against him on the Republican side to become the first female state senator of Utah. Martha had to resign in her second term because her third pregnancy gave away the fact that she was still engaged in marital relations with her polygamist husband, which was by then against federal law. She was full of contradictions.

Maria Amparo Ruiz de Burton was an upper class, educated, proud Mexican woman, who nevertheless defied her family and her church and married a “white man” in a Protestant church. She became the first Mexican-American female novelist. She was a bit conflicted, however, as her writing showed the Mexican viewpoint of American expansion, but from an aristocratic bias, minimizing the Mexican workers. The last years of her own life were spent trying to repel dozens of squatters who were staking claims on her own vast ranch.

Aunt Clara Brown was born in a slave cabin in 1800, month and date unknown. She was given no last name and no one recorded her birth. As a teenager, she married the very handsome new slave acquired by the farmer. When times got tough, he had to sell Clara, her husband and their 2 children. The family was torn apart. Clara’s unquestioning faith in God and ceaseless prayer guided her life. She eventually brought her own freedom, made her way West to St. Louis where she earned some money cooking and doing laundry. After the Dred Scott decision, St. Louis was not safe for blacks and she moved to Kansas. The freedom and tolerance of the West called to her and she talked a wagon train master into letting her accompany his train of 26 single men as a cook and laundress. Blacks were not allowed in the wagons, so she walked next to the wagons during the day and at night cooked, did laundry and slept in the open air. In 8 weeks, she reached her destination of Colorado, bought a cabin for 25 dollars, opened a laundry business and in a few years, was one of a handful of women who owned property in the state and was one of the wealthiest with 10 thousand dollars in cash plus her property. She used her money to help her community and her church and continued to pray to be reunited with her daughter. By this time she knew her husband and son were gone.

Charley Parkhurst, the most celebrated stagecoach driver in the West, was a woman who passed as a male from the age of nine. Her gender was discovered upon her death in 1879.

I think you’ll enjoy the stories of these wonderful women. There are immigrants from Ireland, New Zealand, and Wales, a black born into slavery, middle class white women with almost no education to unusually high levels of education, some who pursued their professions while having families, some who went West in a wagon, an Hawaiian who converted to Mormonism and moved to Utah with her family, a young woman who at age 19 devoted herself to fighting the enslavement of Chinese girls in San Francisco’s Chinatown. Also a Mexican aristocrat, and a Yankton Lakota whose father was white.

Each chapter is the story of one of the women, followed by about two pages of the author’s interpretation of why that woman’s life story was chosen. She is very clear about her purpose in writing this book and if you aren’t interested in reading her plug her viewpoint, just skim through it. She offers an excellent appendix at the end of each story with suggestions for books to read on that person, as well as excellent annotated footnotes.

This book is available now for preorder at the major vendors. I was given a galley of this book by the publisher in exchange for an honest review. My rating is 3.75/5.0.