From the Rubble of War 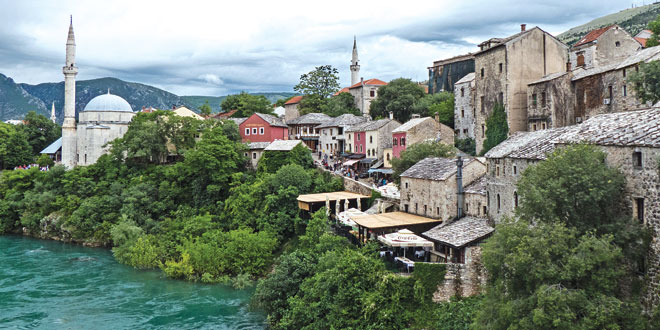 The Ottoman Old Town in Mostar. PHOTOS BY VICKIE KELBER

Visiting the charming, somewhat tranquil city of Mostar in Bosnia and Herzegovina, it is difficult to fathom that less than 20 years ago it lay in rubble, torn apart by war and barbarism.

The Ottomans introduced Islam to this area in the 15th century, and their cultural influence is still widely evident. It later was controlled by the Austro-Hungarian Empire and then part of Yugoslavia. As Yugoslavia dissolved, Bosnia and Herzegovina declared independence in 1991-1992; a bloody war ensued until 1995. Under Slobodan Milo‰eviç, the Serbs wanted to control this area. Francis Tudman wanted some of this area for the Croats. The war brought destruction, and the atrocities were many. More than 100,000 were killed, as many as 50,000 raped and almost 2 million displaced.

As a result of the 1995 Dayton Agreement, which ended the war, three regions were identified: one primarily populated by Bosniaks and Croats, one for Serbs and one where all three ethnic groups live together. Typically, people who are Catholic may refer to themselves as Croats living in Bosnia, and those who are

Some of the many souvenirs and trinkets that can be purchased at the bazaar in the Old Town of Mostar.

Orthodox may say they are Serbs living in Bosnia.

Bosnia and Herzegovina borders Montenegro, Serbia and Croatia. The country has a small outlet to the Adriatic that dissects Croatia; when travelers traverse the coast of Croatia, they actually pass through part of Bosnia and Herzegovina. It is a transit border only; passports are usually not checked. This outlet dates to the Ottoman rule, and was established to help protect Dubrovnik from the Venetians.

Mostar, in the Herzegovina region, is about three hours from Dubrovnik and thus a popular day trip. The Old Town remains a model of classic Ottoman architecture, but throughout the town, the scars of war are evident. Burned out structures remain in ruins next to rebuilt businesses and apartments; many buildings are still pitted from bullets. As one approaches Mostar, the rows and rows of headstones of the cemeteries solemnly mark the tragedy of the war. Many of the stones are engraved with 1993 as the date of death.

The Stari Most, or Old Bridge, was built by the Ottomans in the 1500s, by order of Suleiman the Magnificent. Its beauty was legendary. It was destroyed in 1995 by Bosnian Croats, as was much of the Old Town. With worldwide support, the Old Town has been restored and the bridge reconstructed 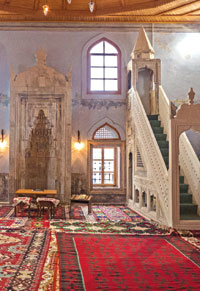 The interior of a mosque in Mostar.

to its pre-war elegance. Ottoman materials and techniques were used in the reconstruction, and it opened in 2004. In 2005, it and the surrounding Old Town were named a UNESCO World Heritage Site. Locals frequently dive off the Old Bridge into the very cold Neretva River below. When we visited, we saw only one person foolhardy enough to try.

Prior to the Bosnian War, the three ethnic/religious groups lived together in peace. Now, with peace once again in Mostar, the Bosniaks tend to live on one side of the river and Croats on the other, although this distinction is beginning to fade a bit. Minarets and church steeples dot the landscape.

The Islamic call to prayer permeates the air in the Old Town five times a day. Two of the mosques that may be visited are Koski Mehmed Pasha Mosque, adjacent to Old Town, and Karadjoz-Bey Mosque just outside of it. Both had to be rebuilt after the war, and their minarets may be accessed. A third, the Hadzi-Kurt Mosque, is also in the Old Town, and is the most touristed. 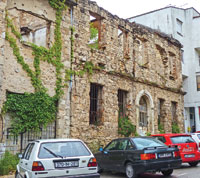 Bombed out buildings from the Bosnia War remain part of the architecture in busy downtown Mostar.

to Turkish Delight candy. There are some artists’ galleries mixed in as well as restaurants and good views of the Old Bridge.

Outside of the Old Town, a well preserved Turkish house, Bi‰ãeviç, is open for visitation. Built in 1635, its design provides a good view of Ottoman life. Surrounded by high walls for the privacy of the women, there is a beautiful courtyard with the requisite fountain and kitchen separate from the house. The home has separate rooms for men and women, and includes a main gathering or conversation room with beautiful carpets and a table set for coffee, a woman’s work room and birthing room. Shoes must be removed before entering. The Turkish Muslibegoviç House, which dates from the 1800s, can also be visited, and rooms rented as it operates as a small hotel.

Museums include the Old Bridge Museum with exhibitions about the bridge and a panoramic view of it and the Museum of Herzegovina with a wonderful film tracing the history of Mostar through the rebuilding of the bridge.

A common practice in Mostar is to post the obituaries of residents along with their photos. We saw a number of them plastered to poles and walls. A staggering reminder of the fragility of life, most of them were for people

The Stari Most, or Old Bridge, and the Old Town have been restored after being destroyed during the Bosnian War in the 1990s.

in their 70s or 80s. As we walked along the main Bulevar (boulevard) — the front line during the war — and other modern commercial streets still bearing the ruins of war and visited the New Muslim Cemetery — a park turned into a cemetery during the war — I couldn’t help but think of all those lives, young and old, lost in the first half of the 1990s.

On the way to Mostar, the village of Pocitelj (built into the mountainside along the River Neretva) is an ancient walled town that makes a picturesque and worthwhile stop. Even those who don’t take the time to visit can enjoy the view passing by as its mosque and minaret stand out along its skyline while a citadel towers above. Its Ottoman and Medieval architecture, including stone houses and walls, has made it home to an active art colony. Looking at the town, it is sobering to know that it was bombed heavily during the war and most of its residents had to flee. “Revitalization” began in 2000.

The capital of Bosnia and Herzegovina is Sarajevo. Unfortunately, time limits prevented us from visiting there, so it remains on our “to do” list. The country has its own currency, but particularly in the well-touristed Mostar, Euros or Croatian kunas are usually accepted.