From the Playing Field to the Ministry 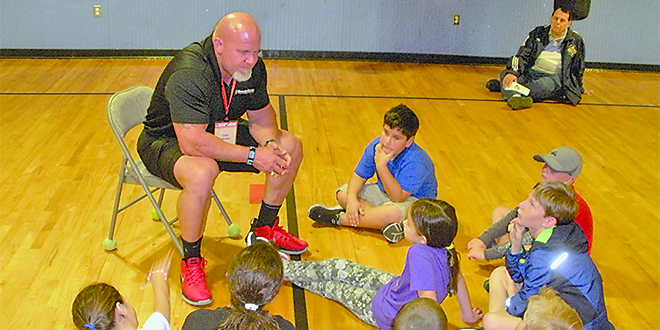 Anticipation filled the air as Chip Minton chatted with the youths who’d flocked, along with a passel of adults, to the Greater Marco Family YMCA gym. All eyes were fixed upon Minton as he prepared to demonstrate a rare skill.

In his hands he held a thick phone book that he quickly proceeded to rip in half. He then dispatched a second phone book in the same manner, before bending a new frying pan in half and breaking a baseball bat on his thigh; all of which the 6 foot-1 inch, 270-pound strongman accomplished without breaking a sweat.

But before reconstituting the first phone book Minton selected a grade school-age boy from the group of children seated at his feet and had him give it a try, to no avail. But as Minton pointed out to the youthful onlookers, he gave it 100 percent, something they should always do.

The Pensacola resident was part of a quartet of former professional athletes who visited the Y recently to use their status and Christian faith to promote positive life choices for youths from grade school through high school. They are part of Sports World Ministries, an Indianapolis-based organization dedicated to by sending professional athletes to share their life experiences with youths, helping them to recognize the consequences of their choices while providing them with a message of hope.

“It’s my desire to preach the gospel across the street and around the world and to seize any opportunity to go out and preach in front of kids and share what Jesus Christ has done in my life,” said Minton, who was a member of the U.S. bobsled team in the 1994 and 1998 Olympics. He was also a professional wrestler on the WCW circuit.

“I’ve been doing this for ten years and I’m so blown away at the way God uses me to go out and reach people for his Kingdom,” he added. “I’m blown away because the first 33 years of my life, I was very selfish. I tried to live my life my own way and that 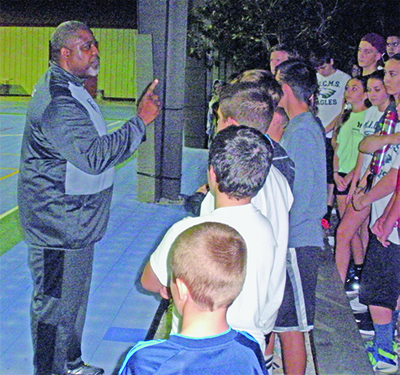 got me into much trouble. I went down the road of self-destruction trying to fix things on my own. But I surrendered my life on June 28, 2003 and I was born again, and my life radically changed and I want to share the message. If I have to use feats of strength to do it, I’ll break bats and tear phone books because, as you see, it gets their attention.”

Minton was joined by a trio of former pro football players: Michael Cobb, a tight end for the Bengals and Bears and in the USFL, Steve Grant, a linebacker for the Colts and Buccaneers, and Jimmie Bell, a defensive lineman for Giants and Chargers and in NFL Europe.

They were accompanied by Devon McDonald, a former Colts and Cardinals linebacker who is Sports World Ministries’ CEO. The Notre Dame graduate said he’s been with the organization for 16 years and has loved every minute of it because of the impact it has on young lives.

“You touch young people and it’s a seed that we’re planting,” said McDonald. “A seed doesn’t always grow up right away, but I believe that we’re having an impact because one day, somebody had an impact on me. I’ve been affected positively by messages and I just believe it’s important just to go back and spend time.”

Cobb urged a group of high school students to make their relationship with God an everyday thing, and used stories from his childhood, college career and early twenties to illustrate that point.

“If you start living your life like a Christian, not only will God be well pleased, but people will notice,” he said. “They’ll start coming up to you and inquire and you’ll be able to explain to them about Jesus and maybe you’ll be able to lead some of your friends to Christ.”

“I think it’s a great thing for the kids,” he said of the presentation. “It shows them how to grow up and that they can do anything they set their mind to.”