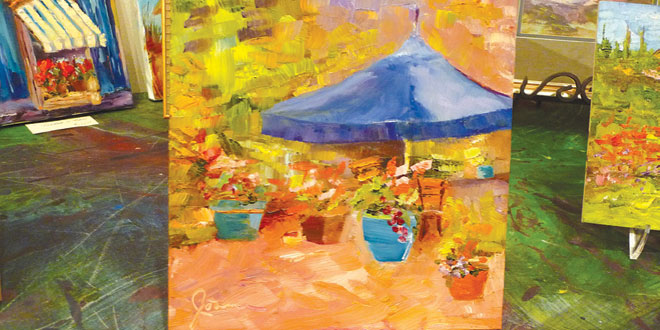 Marco Island Everglades artist Jo-Ann Sanborn recently traveled to Frayssinet, France with an international group of painters led by Dreama Tolle Perry for a 10-day plein-aire excursion in the French Countryside. Wearing purple berets and armed with their best “Oui, Oui!” the seventeen artists were housed at Le Vieux Couvant, a place of retreat for artists and writers.

The grounds of Le Vieux Couvant were designed with an artist’s eye, and included three stone buildings, a lily pond, rose gardens, medieval ruins, poppy fields, a bountiful kitchen garden, climbing roses, and shutters colored in the beautiful blue so common in that part of France. The challenge for Jo-Ann was to paint a landscape very different from the familiar Everglades, and to paint in oil rather than

Jo-Ann Sanborn(L) hosted a French tea at her studio while exhibiting paintings by her and Joanne Lawand (R) during a visit to an artist retreat in southern France. PHOTOS BY VICKIE KELBER

her usual acrylics. She was delighted when her first French oil painting sold to one of the artists in the group.

Upon her return, Sanborn held an exhibition and a French themed tea at her studio/gallery at the Esplanade to highlight the paintings created on the trip. In addition to enjoying the paintings and photos of France, attendees were treated to two kinds of tea, sugared walnuts, pear torte and other refreshments common to south central France and a drawing to win one of the watercolor postcards created at Frayssinet. In addition to her own work, the gallery exhibited the paintings and postcards of Joanne Lawand, who was also on the trip.

To learn more about the trip you can visit her blog at www.joannsanborndaily.com and look for posts about France.