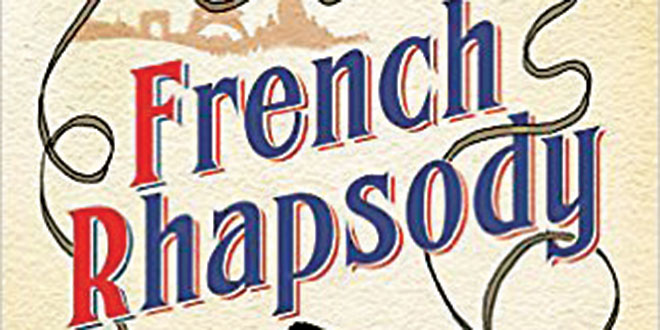 “Reading gives us someplace to go when we have to stay where we are.”

It has been a long while since I laughed out loud so many times while reading a book. “French Rhapsody” is the title that had my endorphins dancing a jig.

A middle-aged married Parisian doctor who has been disillusioned about his profession and personal life for some time receives a letter that has been delayed by the postal service for 33 years. The letter was found along with three other pieces of mail during remodeling; when shelves were dismantled, four pieces of mail were found to have fallen behind the back of the shelves and the wall. It is an invitation from a music recording company to come for an interview, expressing approval for their demonstration tape. Although intended for the entire band of his youth, the Holograms, it was addressed to Alain Massoulier as his parents had the only stable home among the group. Alain had taken over his father’s medical practice and raised his own family at 38 Rue de Moscou, Paris 8e, and thus was the recipient. He was coincidentally outraged and gratified when the letter arrived. His confrontation with the postal supervision is hilarious.

Alain has lost touch with almost everyone but has been haunted for some time by the memory of their sultry vocalist, the sole female member of the group, Berengere. Since Alain has suspected his wife Veronique of cheating on him, the memories of Berengere have been more frequent and lingered longer. After failing to find his own copy of the demonstration tape, he determines to contact the other group members to see if anyone has that tape. So, Alain the electric guitarist starts the search for his former bandmates on the internet, of course. Beside songstress Berengere, he starts to track down drummer Stansilas Lepelle, bassist Sebastien Vaugan, keyboardist Frederic Lejeune, and lyricist Pierre Mazart. The demonstration tape had been funded by JBM, Jean-Bernard Mazart, brother of the lyricist Pierre. It is not hard to find JBM, as he is now a much politicized economist and massively successful businessman.

The nostalgia of the piece is particularly poignant at this point in the story, when Alain confronts his memories of the band members when they were 20 years old, still full of life and stuffed to the gills with hope, with the reality of their physical appearance and their present lifestyles. Angel-faced pudgy Sebastien Vaugan is now a hardbody extreme right winger with his own group of followers, the White Western Party, who might run for 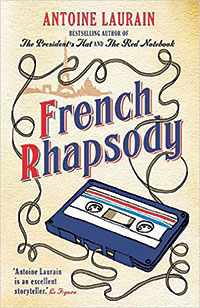 the presidency, his movement has grown so strong. Stan Lepelle is a famous, moneyed artist who has garnered many prizes and awards including a beautiful young Russian model. Frederick Lejeune has a hotel in Thailand and Pierre Mazart runs an antique shop. Alain cannot locate Berengere.

As Alain connects with each of these former bandmates, his enthusiasm for any possible reunion wavers and his recollection of “the good old days” loses its rosy glow as well. This is all good for the readers, however, because we are treated to the author’s satirical comic genius. Laurain takes on medical care, big business, tourism, politics, music, art, and the antiques business. Laurain tosses in a final jab, um twist, towards the end when Alain is able to meet with the music producer who sent that invitation letter in 1983.

This is not a book for the French – anyone can enjoy Laurain’s nostalgia, and his satirically witty take on modern life. The political views expressed by Sebastien Vaugan and JBM are cross cultural. Very few people will not laugh at how Stan Lepelle’s latest great art piece is undone! Millions can identify with Alain’s attitude, “Is this all there is?”

Laurain has written two prior books that American readers embraced – “The President’s Hat,” and “The Red Notebook.” He is a screenwriter and director of short films, a passionate lover of art who also has some experience in the antiques business. Born in the 1970s, Laurain has just hit his stride and we can expect to hear more from him for some time to come.

If you have a few hours, looking for a relatively quick read, but in the mood for something to keep your mind engaged and entertained as well as your humor meter humming, I think “French Rhapsody” is just your ticket. It is not in our library’s catalogue, but the major vendors have it on preorder and it will be available the first week of October 2016 in e-book and paperback. You might consider this for your book club’s list. My rating 4.0/5.0. I was given a galley of this book by the publisher in exchange for an honest review and I thank them.