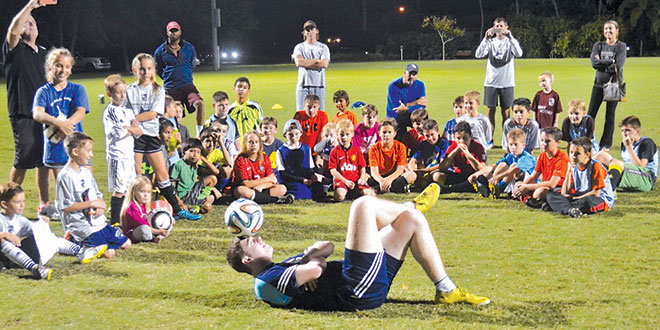 It is hard enough to spin a ball on your finger and balance on one foot at the same time. But to spin a ball on your head, flip it to your ear, bounce it to your foot and then jump over the ball in midair sounds almost impossible. These skills, or tricks as commonly called in the world of freestyle soccer, are second nature to Chris Draper, almost as easy as riding a bicycle. The Optimist Club of Marco Island (OCMI) Soccer Program was given quite a show on Monday night at their youth soccer practice. Chris Draper, professional freestyle soccer performer from the U.K., visited Marco Island this past week and demonstrated the skills of “freestyling” in soccer – the art of self-expression with a soccer ball while performing various tricks using any part of your body. Draper has been a professional freestyler since the age of 21, just a few short years after taking up the sport. “I started out as a soccer player when I was young, about 3, I then stopped playing by age 12. I realized when I was 19 that I enjoyed freestyling and competing more than playing the game itself,” stated Draper.

Performing in front of the Optimist Club’s soccer players brought fun and technical training to the kids. “We

teach the kids to juggle the ball throughout their training and it’s a really hard concept to grasp at the younger ages. To have a professional come in and make it look so easy was a great time for everyone. These are things the kids see on the internet or TV. Watching it live and having Chris work directly with the kids, was a once in a lifetime experience for our soccer players,” commented Tom Bonos, director of coaching for the OCMI soccer programs.

As the session continued through the night, the kids had plenty of opportunity to test their skills and learn the basics from Draper. While they were eager to see the latest and greatest, most advanced tricks, he quickly reminded them that the basics of juggling are the key and that most of his three to four hours of training per day, concentrates on building the basics of juggling. Draper astounded the kids when he talked about what he’s accomplished. “A young soccer player may be able to do 30 juggles without dropping the ball, my record is over 22,000 juggles at one time,” to which he quickly added that it took him over nine hours to achieve that personal best. When one young Optimist soccer player, Leo DeMartino, asked Draper if he ever “tires” of working on the basics, Draper quickly shook his head 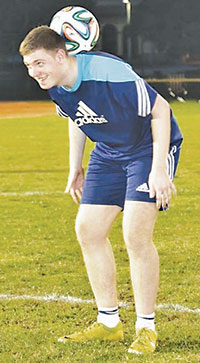 Draper typically spends time on Marco Island every summer, as he has come to enjoy his time here on the island with the local community. “Hosting Chris at one of our practices was really special for us. We are very lucky to have someone of his caliber demonstrate and work with the kids one-on-one to enhance their skills. He’s performed at some amazing venues and soccer games in the U.K. Not many can say they’ve been the halftime show at a professional soccer match. What was truly special was the way Chris connected with the kids. He welcomed all of their questions and sat and talked with them about the importance of working hard to achieve your goals. The fact that he offered to come back, later in the week, and spend more time with the kids really speaks volumes about the quality of a person and professional he is. We are very grateful to host him and look forward to many more sessions with Chris and the kids, ” added Adam Campkin, OCMI travel and recreational soccer coach.

For more information on Chris Draper, please visit his Facebook page at “Chris Draper Freestyling.” He includes videos that showcase his skills and tricks in the art of freestyling.