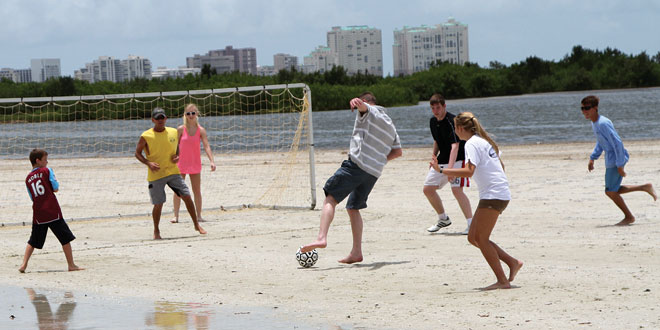 To any American the term may sound somewhat dangerous. But not in Europe. After all, the rest of the world’s version of football is what us Americans call soccer. Freestyle football (freestyle soccer) is actually a sport for one – where the player performs extraordinary tricks simply by using their own body and a soccer ball. A fast growing sport and fun to watch, freestyle soccer performances have quickly grown in popularity. Marco Islanders and Fort Lauderdale Strikers soccer fans were treated to some freestyle soccer tricks over the Fourth of July week by the young and talented professional freestyle soccer player, Chris Draper.

The twenty-one year old hails from Burnley, England, but vacations with his parents on Marco during the summer. “We’ve been coming here a few years now and we really like how nice it is and how friendly it is here,” explains Draper. In need of a local place 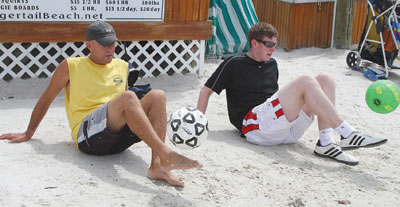 Tony Smith and Chris Draper having a good, coordinated, time down at Tigertail. PHOTOS BY JESSICA SIMON

to work out and practice his skills, Draper quickly found Marco Island Fitness, where owner Bob Cholka was happy to let him practice at the facility.

“So many gyms are quiet and people keep to themselves. Here, it’s more of a family, and they have brilliant equipment,” says Draper of Marco Island Fitness. “I love it in America. People are just really friendly.” Draper has also vacationed in California and Oregon.

One would think a vacation calls for a break from work, university, teaching freestyle soccer or playing in his local soccer league, but not for Draper. While leaving school, soccer games and his teaching behind, Draper still had two performances scheduled for a half-time and a pre-match show for the Fort Lauderdale Strikers. Which meant practice, practice, practice – the key to his success… and patience.

Having only seriously devoted himself to freestyle soccer in the last year, Draper has performed at a number of high 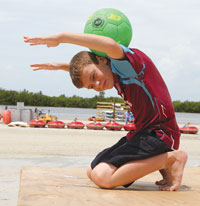 Jack Smith with a promising future shows plenty of talent!

profile events in the U.K. and Scotland. His largest audience was a group of 60,000 at a family fun day at Celtic Park football arena for the Celtic Football Club in Glasgow, Scotland. He has performed in London for an Arsenal F.C. Corporate event at the Excel Center, built for the recent London Olympics. Draper will also soon appear in a promotional video for Real Madrid, “the world’s biggest (football) club.”

Notoriety isn’t what attracted Draper to the sport. “It is fun to build my name and I feel very lucky at this point. I really just like to see the amazement; see (people) happy. It’s not something they see every day,” he says of his audiences. Draper says he often looks out at the crowd even as he’s performing skilled tricks to see the excitement.

He also says performing in front of small crowds and on up to 60,000 is less stressful for him than 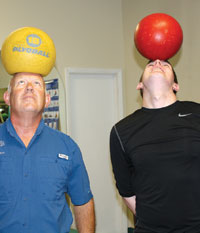 to play in a competitive soccer match. “I’ve been playing soccer since I was four but never really on teams because I was just more interested in having fun. It’s less pressure when it’s just you.” Freestyle soccer still offers Draper a great workout but there’s no pressure of disappointing a team or feeling like you have to win. For Draper, it’s just fun.

On Wednesday, June 3, Draper brought his soccer ball down to Tigertail Beach, where he met with fellow Brit, Tony Smith. Tony, owns Tigertail Beach Rentals and Café and also coaches the Lely’s Girls Varsity Soccer Team. The two practiced tricks together and talked football all afternoon. Some local soccer players also came out to enjoy, practice and check out Draper’s skills.

Already back in England, Draper says he would, “be extremely happy to come back to the U.S. and perform.” To see videos of Draper in action and for more information, visit his website at CDraper92.moonfruit.com.