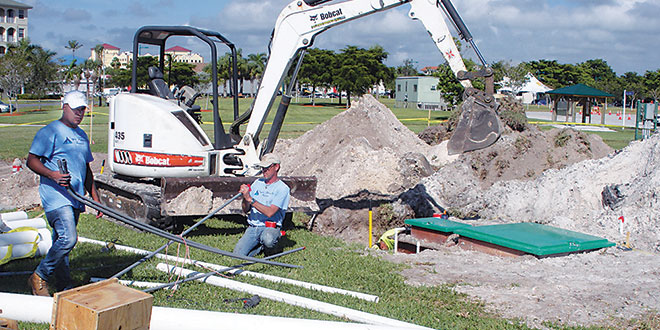 After seven years of fundraising, the Freedom Fountain is becoming a reality. Construction on what is touted as the crown jewel of Marco Island’s Veterans Memorial Park began in mid-November, and has an expected completion date of the end of February.

When completed, the roughly $200,000 Freedom Fountain will stand 10-feet tall and have a 26-foot circumference. Topping it will be the bronze, 9-foot tall, in-flight American eagle currently perched outside the city of Marco Island’s Community Room, located behind City Hall. An artist’s rendering of the Freedom Fountain is on permanent display at both City Hall and Mackle Park.

The Freedom Fountain is the third phase of construction at Marco’s Veterans Memorial, which was made possible by $522,000 in generous community donations. It will sit at the memorial’s entrance, joining the flag plaza where the American, Marco Island, state of Florida and POW/MIA flags proudly wave above the inscribed brick-paver plaza. The plaza is accented by a planter bench in the center and memorial benches and trees along the perimeter with the Veteran’s Memorial Circle in the background.

The fountain’s fate was sealed this summer when Bob Sargent and his late wife Thelma contributed $81,000 to the effort. The donation gave the Veterans Memorial Fundraising Committee the final funds necessary to begin work on the Freedom Fountain. All told, the Sargents have donated more than

$100,000 to Veterans’ Memorial Park. Other major contributors to the fountain are Jim and Allyson Richards and Mike and Jill Havey.

Established in 2007, the all-volunteer Veterans Memorial Fundraising Committee raised funds for the memorial through private donations and the sale of the commemorative brick pavers, bench plaques, service-branch medallions, palm trees and flag pole memorials. A grant of $20,000 also was awarded to the Freedom Fountain project by the Community Foundation of Collier County.

Upon completion, a public dedication ceremony will be held to commemorate the fountain. Fundraising Committee Chairman Lee Rubenstein is hopeful the fountain can be dedicated during the Feb. 12-16 return to the island of The Traveling Vietnam Veterans Memorial Wall. Known as “The Wall That Heals,” the replica exhibit first came to Marco in December of 2011 and attracted more than 16,000 visitors during its four-day stay.

The Fundraising Committee and the city are continuing to secure funds for future enhancements to the memorial and park. Commemorative brick pavers still can be purchased, as well as commemorative inscriptions on the fountain’s granite panels. Tax deductible donations also are being accepted. Donation forms and information on purchasing brick pavers and fountain inscriptions are available at Mackle Park or by calling Patty Mastronardi of the city’s Parks and Recreation Department at 239-389-5035 or Rubenstein at 239-564-9894.

For online information to donate to the fountain or purchase pavers visit: www.cityofmarcoisland.com/index.aspx?page=367.