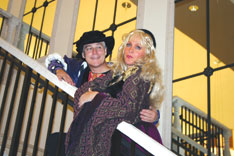 Wine, compliments of Clive Daniel Home, will be served beginning at 4:30 p.m.

All presentations begin at 5:15.

Shakespeare in Paradise, Southwest Florida’s newest theater company, will present a lively lecture series at Clive Daniel Home throughout the winter season, and it’s free to the public. The series, beginning February 15, will include scenes from Shakespeare’s plays, as well as readings and discussions, led by Shakespearean actor/ producer/ director John McKerrow, founder of Shakespeare in Paradise.

Wednesday, February 15 will be all about love, with readings and discussion of Shakespeare’s most romantic sonnets.

On Thursday, March 15, there will be a sneak peek at A Midsummer Night’s Dream, with scenes from the company’s upcoming production on March 22.

On Thursday, April 12, the program will include scenes and readings from Hamlet.

On Thursday, May 17, Shakespeare in Paradise will present some of The Bard’s most inspirational speeches, From the King’s Monologue in Henry V to Portia’s Monologue in The Merchant of Venice, including performance, readings and discussion.

Clive Daniel Home is committed to community support, with a special interest in the visual and performing arts. According to president and CEO Daniel Lubner, the upcoming season will be filled with lively events for the pleasure of their customers, and to support worthy causes. Since opening last November, the company has already hosted events for the Humane Society, the Collier County Education Foundation, Laces of Love, with upcoming events to benefit Hope for Haiti and the Shelter for Abused Women and Children, among others.

Shakespeare In Paradise was named Best New Theater in 2011. In addition to performances at public and private venues throughout Southwest Florida, the company performs on stage at Barron Collier High School.