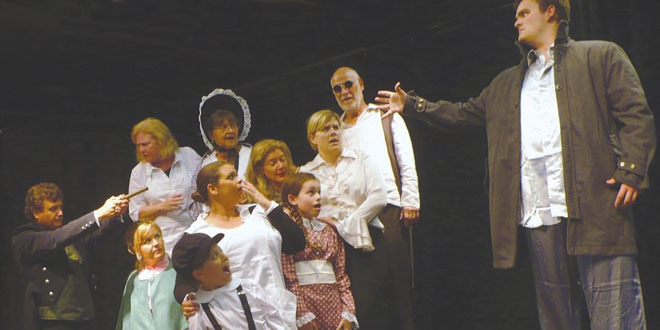 The cast of ‘Frankenstein: A New Musical’ SUBMITTED photo

The Box Office is open and tickets are currently on sale for the upcoming production of “Frankenstein: A New Musical.” Based on the Mary Shelley novel, the music is by Mark Baron, book and lyrics by Jeffrey Jackson and original story adaptation by Gary P. Cohen.

This collaboration between the Island Theater Company and the Marco Lutheran Church is a true community theater project. From music director to set designer to actors and so on, they have linked their creative arms together to put on this very special production, while offering the community a beautiful, and at times, heart wrenching story.

Frankenstein explores the full gamut of human experience like no other novel ever written. This is Mary Shelley’s original, brilliant, romantic terror — a dark vision of what lies at the depths of the human soul and what happens when its full power is unleashed.

Imagine a world without grief and pain. It is this noble goal which first compels Victor Frankenstein to pursue his dreams of discovering the secret of life. Having lost his mother to scarlet fever, he vows to rid our world of the strife of death. His father’s unconditional devotion to his brilliant future is evidenced by his enduring pride in his son’s efforts. Elizabeth, Victor’s fiancé, exemplifies the power of true love. She will never turn from his side, and through her, he can and will understand the ideal that love can truly conquer all.

Curiosity is depicted in the exuberance of youth found in William, and the genuineness of faith and loyalty can be seen in the character of Justine, the governess. True courage is portrayed through the role of Henry. A best friend’s dilemma forces him to stand up for what he knows is right with the hope that he will change the future by altering its course. The qualities of friendship and kindness, as well as anger, fear and rage are witnessed through his encounters with the blind man, his daughter and the variety of people ranging from an angry mob to the sophisticated aristocracy.

“Frankenstein: A New Musical” will run for one weekend, March 7-9, at the Marco Lutheran Church, 525 N. Collier Blvd. Evening performances Friday and Saturday are at 7:30, and the Sunday matinee is at 2:30.

Tickets are $25, and can be purchased in person at the Marco Lutheran Church or online at www.theateronmarco.com. For information on the production, please call 239-394-0080.

Joe Byrne as the Creature

Marvin Klein as the Blind Man

Peter Galuzzo as the Executioner