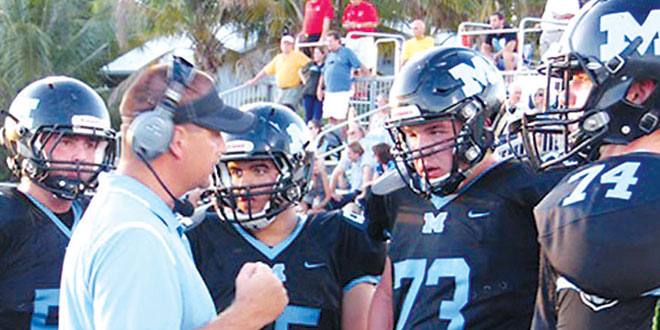 Greg Fowler and son Andrew will be showing their talents at 1AA North Moore High School in Robbins, North Carolina.

Greg Fowler left on May 19 to become the school’s new offensive coordinator.

He certainly will know the quarterback, son Andrew.

The rest of Fowler’s family will join them after school is out.

Andrew transferred to North Moore on May 16 to take part in spring football practices. School enrollment is 630.

“We have been personal friends and kept in touch,” Vogt said. “I coached against him when I was in Florida at University High School at Orange City.”

Vogt said when Fowler resigned he contacted him a few months later for the opening he had as offensive coordinator.

Vogt had been serving as defensive and offensive coordinator. In his three years he has done a credible job in building a program that had lost 32 straight games before Vogt came 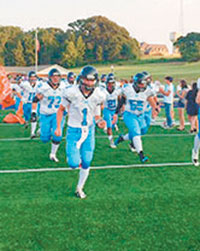 Photos by Roger LaLondeMIA quarterback Andrew Fowler loosens up before a game.

“We have the same philosophy and I have tremendous respect for him. He’s a solid football coach, ” Vogt said of Fowler.

Andrew Fowler comes at the right time for North Moore. Its three-year starter at quarterback is graduating.

“I have some young guys for the future, but they are not as ready, or as polished as Andrew,” Vogt said. “More than anything he’s a great kid and ready to take over the reins.”

The opportunity looks even better as the team returns 18 seniors. Andrew Fowler played offense and defense at MIA. Vogt doesn’t like having a quarterback or his offensive line going both ways.

“We’ll have around 60 boys out for JV and varsity and we’ll put the best product we have on the field,” Vogt said.

No doubt the Fowlers will help.