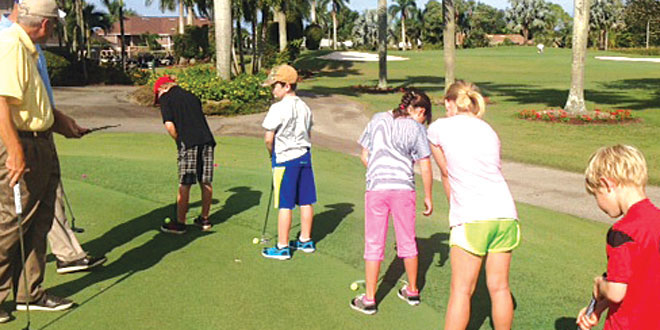 Recently, the Kiwanis Club of Marco Island put out an all-call to local businesses for assistance in honoring Tommie Barfield and Manatee students. Toni Novack, Membership Director of the Royal Palm County Club in Naples, immediately stepped up to the plate and agreed to host groups of fifth, fourth and third grade students for a golf lessons and light refreshments on three Saturdays.

The first group, fifth graders, met on November 2, and the Royal Palm Country Club did a royal job of working with the children. Rick Neet, Director of Golf for the Royal Palm County Club, who was recently named Southwest Florida PGA Professional of the Year, was assisted by Mike Kaufman in supporting each child’s attempts on the putting green. The club had arranged some special age appropriate set-ups that assisted in each child’s success. Students Sam Nemeth, Jack Creedon, Sabrina Rod, Scotia and Brodie Holdsworth, 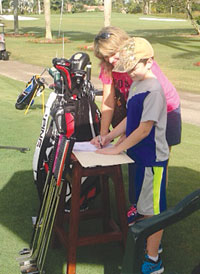 Abagail Stier, and Olivia Molina, parents and Kiwanis club members who attended all had a great time.

In addition to the golf goodie bags provided by staff, fifth graders and their parents enjoyed light refreshments afterwards in the clubhouse.

The Kiwanis Club of Marco Island appreciated Royal Palm County Club for their support of local area students and invites any other businesses on Marco Island or in Naples to join in.

Fifth graders from Manatee and Tommie Barfield are being honored during November and December, fourth graders during January and February and third graders during March and April. A business might decide to extend, for example, some courtesy (an ice cream cone, a discount on a meal or a purchase) to children and their families during the months their grade levels are being honored.