A sample of some of the donated fossil specimens now housed at the Marco Island Historical Museum.

The Marco Island Historical Society (MIHS) received a generous gift this holiday season, but not the kind typically found under a tree. The Florida Department of Environmental Protection/Florida Geological Survey and the Florida Paleontological Society partnered to donate a collection of more than 250 Florida fossils — the first such collection for the MIHS.

Included amongst the specimens are more than 225 invertebrates (mostly fossilized shells) representing at least 45 species that date to the late Pliocene (approximately 3 million years old). They were collected from a quarry in Sarasota on Nov. 9, 2013 by a team of professionals on a field trip with the Florida Paleontological Society Inc. Guy Means, assistant state geologist for the Florida Geological Survey, generously collected and donated the fossil marine mollusks for the MIHS. The shells are representative of this region during a time in which global climates and sea levels fluctuated dramatically. Though many of the species are now extinct, others (such as the Southern 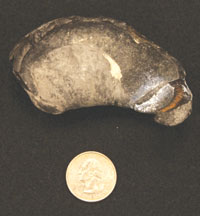 Ear bone of Balaenoptera floridana, an extinct species of baleen whale.This specimen is believed to be approximately 3,000,000 years old.

Quahog and Sunray Venus, both clams) can still be found on Marco Island beaches.

The vertebrate remains, also collected and donated by Means, are more recent, dating to the late Pleistocene (approximately 15,000 years old). They include the remains of both marine and terrestrial mammals, such as bison, deer, dolphin, horse, llama, mastodon, tapir and whale. Also present are the fossilized teeth of several species of shark, the upper jaw of a large mouth bass, a snook vertebra and an alligator osteoderm (aka “scute,” one of the pointy ridges along an alligator’s back). Several of these animals are now extinct as well, but all lived in Florida during the Ice Age at a time when the Florida peninsula was much wider than it is today due to lower sea levels worldwide. Florida’s first human residents, the “Paleo-Indians,” who are thought to have first moved into the area as many as 14,000 years ago, likely encountered some of these species.

The fossils were formally donated on

Two examples of Encope tamiamiensis, an extinct species of sand dollar so specific to Southwest Florida, that it is considered an “index fossil” for identifying the Tamiami Formation. These specimens are believedto be approximately 3,000,000 years old.

Dec. 13, 2013, when Means drove them from Tallahassee to Gainesville, where he met Austin Bell, MIHS Curator of Collections, at the Florida Museum of Natural History (FLMNH). Many species were identified on site by FLMNH paleontologists Richard Hulbert and Roger Portell, who graciously donated their time to creating an invaluable index and record for the MIHS.

Some of these fossils will be seen on exhibit in the Marco Island Historical Museum, likely in late 2014. Those items not on display will be preserved in collections storage and made accessible to researchers and the general public upon request. With the recent acquisition of a collections management database, the MIHS hopes to make some of its collections, including this one, available for online viewing in the not too distant future.

The Marco Island Historical Society is deeply grateful to the Florida Department of Environmental Protection/Florida Geological Survey, the Florida Paleontological Society, the Florida Museum of Natural History, and Means for their extraordinary generosity in the name of public education.