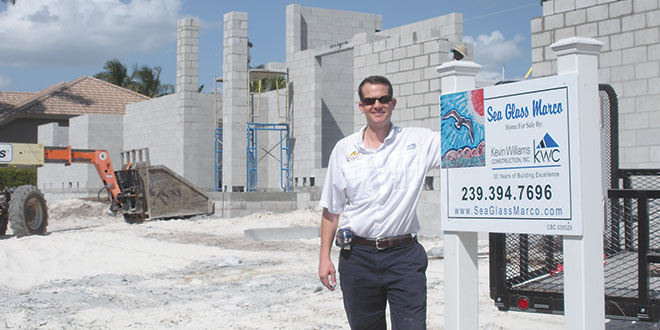 Ryan Williams, vice president and co-owner of Kevin Williams Construction, stands near a model home the company is building at the intersection of Barfield Drive and Majorca Court. Photo by Don Manley

Ryan Williams can boast of being in rare company after being named to Professional Builder Magazine’s “40 Under 40 Class of 2016.”

Williams, the vice-president and co-owner of Kevin Williams Construction on Marco Island, was selected from the more than 350 people, nationally, nominated for the award which is based on their personal and professional accomplishments.

“These young leaders are as dedicated to serving their communities as they are to growing their businesses and have remarkable achievements in their personal lives as well,” said Denise Dersin, Professional Builder’s editorial director.

Williams, 37, was nominated by his father, Kevin Williams, the company’s founder and president.

“It was unexpected,” said Ryan Williams. “I filled out the application and sent them a personal statement and resume, but I really didn’t expect that I would be recognized as one of the 40. So it was a fantastic surprise.”

He said the surprise was heightened by the award’s national scope.

Ryan Williams is a graduate of the University of Notre Dame, where received a bachelor’s degree in finance, with a minor in accounting. His accomplishments include:

Serving his second term on the Greater Naples Chamber of Commerce’s board of directors after being invited, four years ago, to be the board’s youngest member.

Improving his sales skills during the recent recession by working as a representative for Northwestern Mutual Life Insurance and Financial Planning.

Outside of work, he was a member of Leadership Marco 2015, and he has served on the Opportunity Naples implementation committee. He is also a member of the Notre Dame Club of Naples.

“I’ve done a lot of community work and continue to be involved,” Ryan Williams said, while noting that he stays abreast of key issues involving building industry, including regulatory matters, and that he makes it a point to attend industry conferences whenever possible.

His range of duties with the company include being a project manager and supervisor, along with his father, with both men usually present on job sites every day. He also helps with project pricing and bidding, reviewing contracts and proposals, along with handling billing and invoicing, updating the company website and social media accounts, and deciding on an advertising budget.

“We both wear many hats, but that’s what you have to do when you have a small business,” said Ryan Williams.

After college, he went to work for Lehman Brothers as an analyst, working out of the Twin Towers in New York City. He was on the job on 9-11, when the first plane hit the tower where he worked.

“I was very happy to be able to come back to Marco Island and start building houses with my dad.” Fortunately that opportunity came about in 2004. “I really love what I do and love the fact that I get work with my dad on a daily basis. The last 12 years have been very fulfilling personally and professionally because of that.”

He hopes to attend this year’s “40 Under 40” awards ceremony, set for June in San Francisco, if his parental duties will allow. “Life is a little hectic now to be taking trips,” heW added.