Former Bridge Trolls State Fundraiser to Help One of Their Own 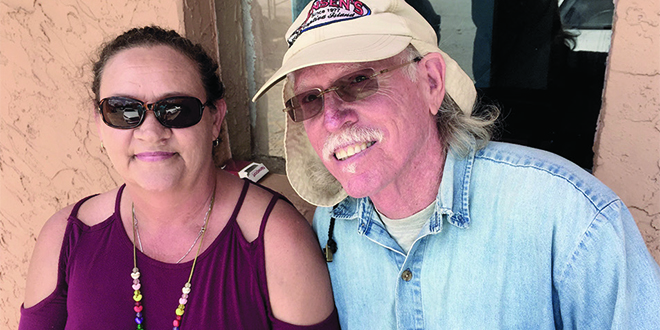 The massive 7,230 acre fire in Picayune Strand State Forest in early March hit particularly close to home for Marco Islanders Caroline Snyder and JRobert Houghtaling. Their longtime friend and fellow “Bridge Troll” Steve Thomas was fighting for his life—and for his home as the fire raged.

Thomas survived, and he saved his home. But his property sustained extensive fire damage. On Sunday, March 19, at Gators’ Crossroads, Snyder and Houghtaling staged a fundraiser to help their old friend.

“It all starts with our musical gatherings under the Goodland bridge for so many years,” Houghtaling said. “We were the North Goodland Yacht Club Bridge Trolls. Steve Thomas was the airboat guy. Steve would sing the songs and he needed some accompaniment. Pretty soon we were collecting all sorts of musicians and characters. It was a place of the crossings—where the road meets the river. It was a magic place.”

Robert and Caroline Snyder moved to Marco Island from Oklahoma 13 years ago and met everybody under the bridge and became members of the group.

“Everybody knew that fire was headed for Steve’s place in the Picayune Forest,” Houghtaling said. “He saw it coming. He stood his ground. He should have evacuated, but he wanted to protect his place.”

“Had he evacuated he wouldn’t have a house at all,” Caroline Snyder said. “He fought that fire off with a broom and a rake.”

“It came sweeping up like a firestorm, like a tornado,” Houghtaling said. “The cabbage palms were going off like firecrackers. The plastic lawn chairs were melting behind him. He saved his house. He saved his trucks—they run but they’re all burned.”

“He thanks God he survived it,” Houghtaling said, “and that he still has a home.

“He lost a lot. Before, it was like a tropical jungle,” Houghtaling said. “Now you can drive by it and see his house there amongst all the smoldering.”

“He called it Eden out there,” Snyder said. “He had a path of knowledge. When people would come out he would walk around the property and explain all of the Florida plants and things he had planted.”

“People ask what he did,” Houghtaling said “The fact is he’s a hermit. He’s a good man. He loves the woods. That’s his story. Robert and Caroline and I were talking. ‘We’ve got to do something.’”

Snyder had the perfect idea.

“I talked to the owners of Gators’ Crossroads,” Snyder said. “They were more than happy to host this fundraiser. They’re just lovely people.”

“I guess the most imperative thing is that he needs water,” Houghtaling said.