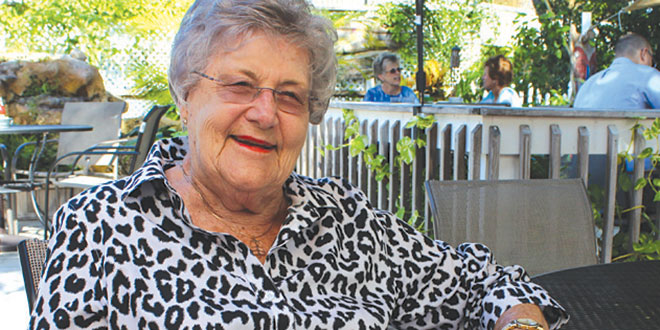 Doretta Alger has a genuine smile, bubbly personality and is earnestly happy to meet people. When it comes to Doretta, nothing strikes you as unusual until you learn she is 95 years young! She completely belies her age.

Of course, the first question always is “to what do you attribute your youthful appearance?”

Longevity seems to run in the family as Doretta’s grandmother lived to be 101. Doretta added, “Each birthday, I walked my age. When I turned 90, I walked 90 minutes. At 91, I walked 91 minutes and so on. I did it each year until I turned 94. At 94 and with a cane, I had done enough! My kids urged me to do it, but I felt I earned the right not to.”

Doretta lives in Lely Palms where she’s been for the past five years. She chose that particular location because it was the closest to Marco Island. “They said they had one villa available. So I took it. Even now, I come to Marco Island at least a few times a week. I love Marco and don’t want to be too far.”

After Doretta and Arnold were married, they lived with her parents. Doretta was eight months pregnant with her first born child when Arnold left for the army. They thought his service would be for one year. “Arnold was in the ROTC in college, he was company commander in World War II. He landed in Normandy on the second day of the invasion.” When their first child, Doug, was about seven months old, Arnold’s parents received a telegram from the army. They brought it to Doretta, everyone feared the worst. Through a stream of tears and with much fear, she read, “Arnold Alger has been wounded slightly.” She was relieved. By the time Arnold returned from service, their son was two years old and the family had endured more than one of these letters from the military; fortunately, all were for minor injuries.

Yet, Doretta feels she has always had an easy life. She was fortunate enough to have a second hand car and was able to move into an apartment when Arnie’s parents relocated to Minnesota. “I was fortunate, I was able to live on an officer’s salary. I have always felt I was being looked after.”

Everyone has some difficulty in life and in Doretta’s, it was when Arnold was sick. She explained, “Arnie loved being out on the water and he loved to fish. Once, as Arnold was coming in from the boat, his leg gave way. By the next day he was paralyzed. He had contracted Guillian Barre syndrome. He spent seven months in NCH. He had to learn everything over again, how to sit up, how to hold a fork, everything.”

Still, the worst event in their lives was when Arnie had colon cancer. “He was in so much pain at the end. He prayed to go, it was so difficult. I’ve always had faith though and as I say, God is watching over us. When you think about it, Arnold is still taking care of me, too.”

When asked, Doretta confirms her proudest moments are with her two children and eight grandchildren. “Doug is now 71 and Debbie is 66. The grandchildren and I stay in touch through texting.”

So how does Doretta view the world today? “We need to have a lot of faith. I am a believer. I think people need to ask for help if they really need it.”

Roald Dahl once said, “If you have good thoughts, they will shine out of your face like sunbeams and you will always look lovely.” So it is with Doretta Alger as she flashes one of her bright wonderful smiles.