For Vale, Havemeier Paths Lead to Head of Their Class

Taking different paths, and reaching lofty goals, Stephen Vale and Haley Havemeier stood at the top of their class at the Marco Island Academy (MIA) graduation ceremonies on June 3.

Vale took the podium as valedictorian and Havemeier followed as salutatorian.

They both chose MIA for similar reasons, but at different times. Havemeier first went to Lely High School her freshman year.

He earned a whopping 62 college credit hours, graduating from FSW two weeks before he graduated from high school.

More than 400 relatives and friends packed the Family Church auditorium for commencement exercises.

Vale started out at MIA because, “in a smaller school I would get to know everyone, not just be a number. I would get extra attention from the staff and make more friends.”

Havemeier liked Lely, but said “I felt overwhelmed trying to be involved.” She decided being closer to home would help and MIA’s block schedule helped balance her time to include sports. 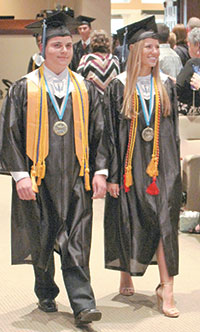 is like my second mom, she has coached me since eighth grade,” Havemeier said. “Being in sports helps you become part of your school.”

She was captain of the cheer team, played golf, tennis and track.

Vale was involved in student government and the Interact Club his first two MIA years.

“It helped boost my confidence, knowing the staff would help in any way for me to be successful,” Vale said.

The experience led to Vale choosing the dual enrollment program at FSW.

Being one of 11 children, Vale’s focus is on becoming a doctor in child psychology. He will attend the University of Florida.

“It will allow me to get out a year earlier,” she said.

Planning on a major in business administration and management, she expects to go on to law school and become a lawyer.

Havemeier said, “High school has held so many amazing memories and accomplishments that wouldn’t have been possible without the support of my family, the laughter of my friends and knowledge of my teachers.”