For Now, the Center of the Pickleball Universe 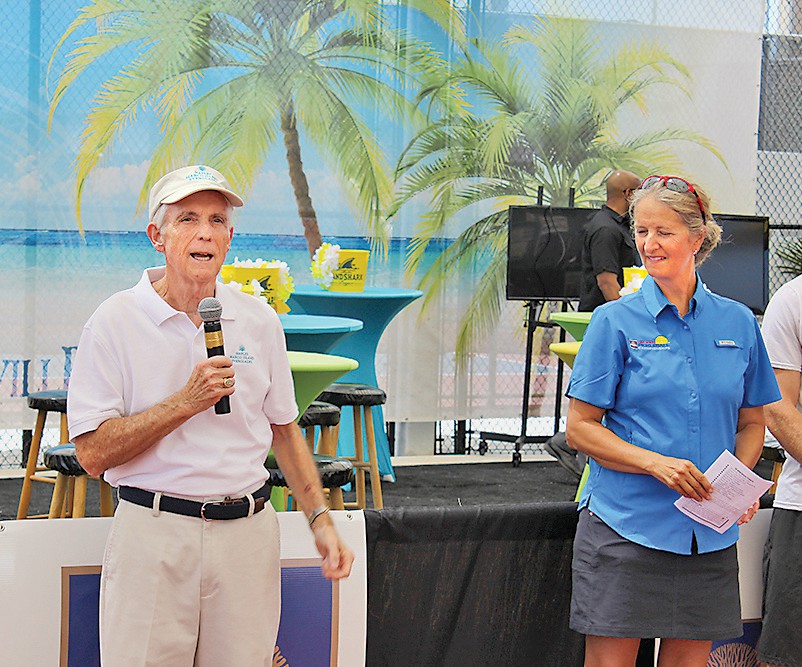 Speaker Jack Wert, of the Collier County Convention and Visitor’s Bureau, at the start of the event.

If there is a descriptive phrase that can be overused when considering a multitude of things, situations and events it is “bigger and better.”

But where the Minto U.S. Open Pickleball Championships are concerned, it’s difficult to come up with a more apt characterization.

The second installment of the weeklong tourney has top-echelon players from around the world competing for $35,000 in prize money at East Naples Community Park’s 46 pickleball courts until April 29. Approximately 1,300 athletes from 44 states and 14 countries are taking part. Last year’s debut event attracted 866 participants from 39 states and seven countries.

Between 10,000 to 12,000 pickleball fans, many from outside Southwest Florida, took in the action last year, and attendance is expected to again reach that level. The tournament generated $2.5 million for the Naples-area economy, according to the Naples, Marco Island, Everglades Convention and Visitor’s Bureau.

The 2016 championships were a hit with players such as Kyle Yates of Fort Myers, who won the men’s pro-doubles division last year.

“Last year, this was the best event in pickleball, by far,” he said. 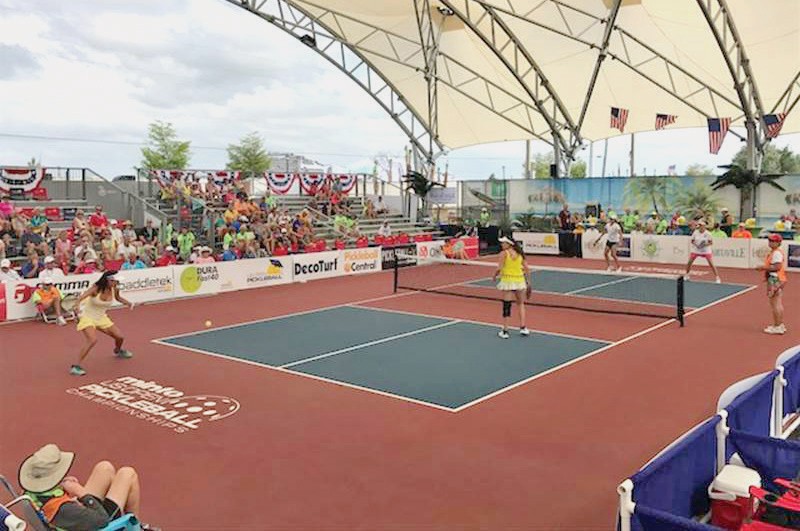 “I’ve been all over. I’ve played in the nationals for three years. I’ve seen almost every facility in the country. I’ve played in Europe. This is the coolest facility and I’m so blessed to be here.”

The gathering was held underneath the new $750,000 permanent shade canopy erected over the park’s Zing Zang Championship Court and its 700 seats in time for this year’s tournament. The canopy was paid for by Collier County and Minto, developer of the Isles of Collier Preserve community, located adjacent to the park.

Jack Wert, executive director of the Collier County Convention and Visitor’s Bureau, said the investment in the canopy and the park’s pickleball facilities illustrate the county’s pride in and support for both the sport and sports tourism, which has been on the rise in 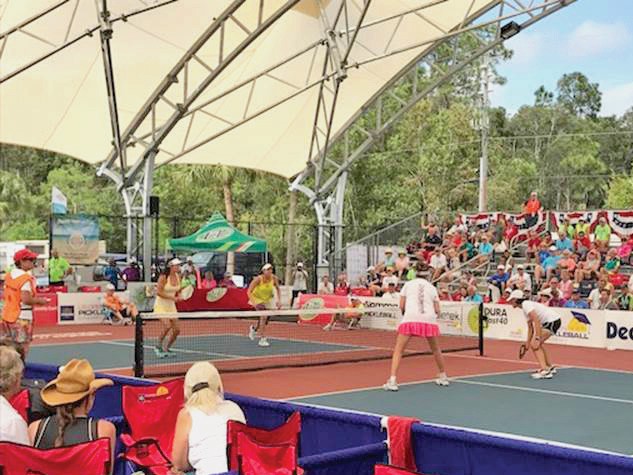 “We want to make sure the world knows that this is the world capital for pickleball,” he added. “This is it right here.”

Invented in 1965 in the Pacific Northwest, the racquet sport has become a popular form of recreation in Southwest Florida, especially among the 50-and-above crowd, and it’s reputed to be one of America’s fastest growing recreational sports. The Sports & Fitness Industry Association estimates that more than 3 million people in the U.S. that play pickleball.

Pickleball is a blend of tennis, pingpong and badminton, played on a badminton sized court using a solid paddle and a perforated, plastic sphere that resembles a waffle ball. Play can involve two or four players, who use the paddle to send the ball over a 3-foot-high net to their opponent.

The Convention and Visitor’s Bureau also funded the creation of the U.S. Open Pickleball Academy, which is based at East Naples Community Park and began operations last fall. The academy provides instruction for all ages and skill levels, as well as destination camps, leagues and referee clinics. 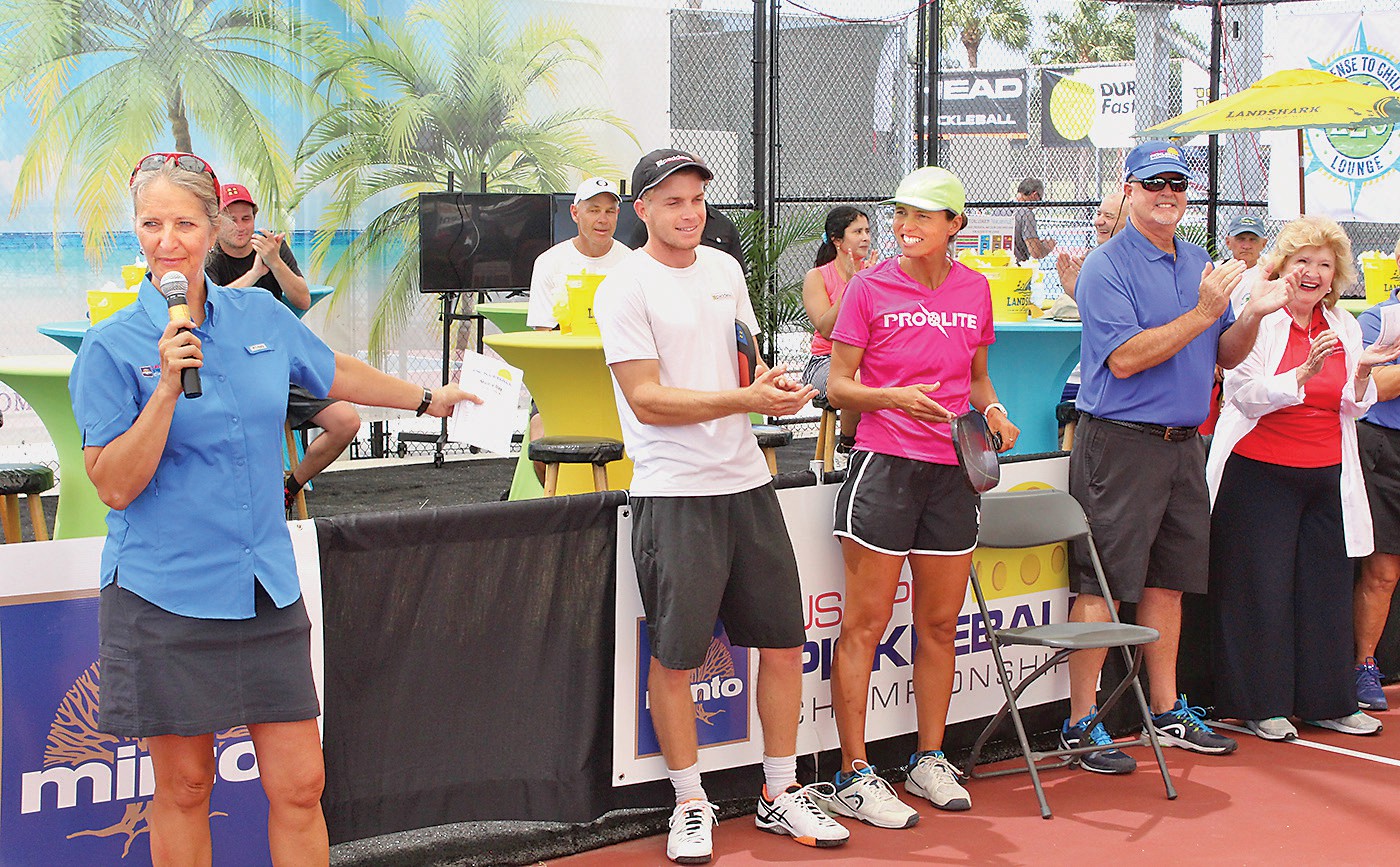 the academy and the ancillary activities here truly makes us a year-round destination for pickleball,” Wert added. “People can come here and learn the sport, play the sport, and we have the championships and we can tell the world about it. It’s an opportunity for us to send the message virtually all over all over the world that this is the pickleball capital of the world.”

Simone Jardim, the women’s singles champion at last year’s Open, is the academy’s head instructor. She was so impressed by the event and the area that she left her job as head tennis coach at Michigan State University, and moved to Naples with her husband and their two children.

“The community has really embraced pickleball, big time, and I thought it (the academy) was something that was really possible,” she said of the move.

Minto first took note of the sport’s popularity in 2009 when residents at its Sun City property in Tampa asked to have some tennis courts converted into pickleball courts.

“I asked them, ‘What the heck is pickleball,’” said Bullock, who is 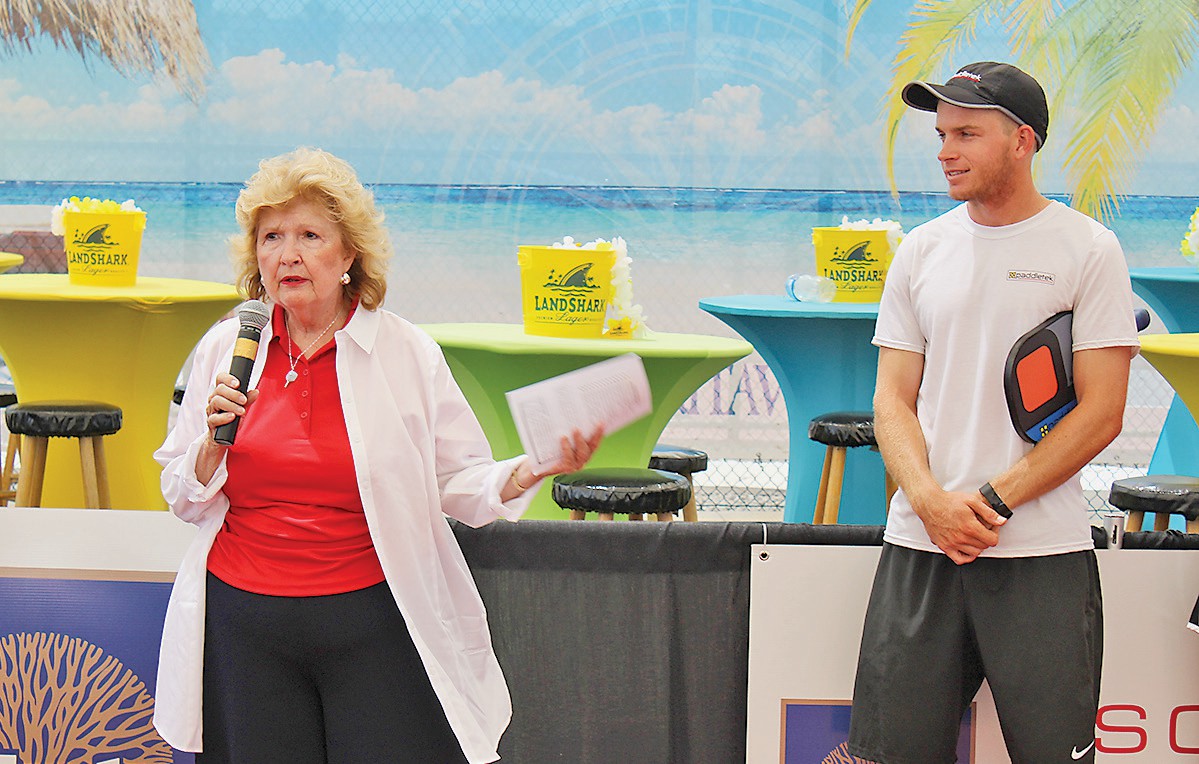 the company’s vice president. “After the residents provided me with a crash course I the sport, we got on board and helped them switch over the courts and have never looked back.”

Since then, Minto has begun installing pickleball courts at all of its resort communities in Florida, including the Isles of Collier Preserve community, located next door to East Naples Community Park.

Bullock said that when Fiala asked him, in January of 2016, whether Minto would support the effort to start the tournament, he met with her and the event’s organizers: Graham, Spirit Promotions’ Executive Director Chris Evon and Jim Ludwig, executive director of the nonprofit Pickleball For All, that is dedicated to introducing the sport to children and adults.

“They asked if we’d ever heard of pickleball and I responded, ‘Are you kidding,’” he said. “From that day forward, we’ve been fully supportive of a publicprivate partnership with Collier County and the U.S. Open Pickleball organization to create the world’s foremost pickleball destination tournament.”