Football Combine Connects Players to the Next Level 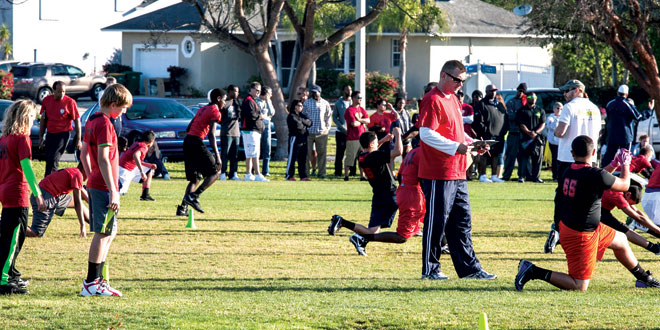 A sea of red hit Mackle Park recently as young athletes had the opportunity to hone skills and refine techniques through a Football University Combine. About 300 kids from Collier and Lee counties, Miami and even West Palm Beach attended the free event.

The event was sponsored locally by the Marco Island Optimists whose football league recently joined the Southwest Florida Youth Football and Cheer League. The combine was free for all 5th through 12th graders and was a joint effort between the US Army National Combine and the Football University.

For all of the die-hard players out there, coaches made it clear just how much effort will be required on their part. Coach Dwight Thomas of LRS Sports Recruiting was present to identify Division 1 and top college prospects. As the coach of one of NFL’s great players, Emmitt Smith, he threw out some compelling stats to the older players, “One out of every 111 players in Florida actually gets recruited,” he said and also added that, “only 3% of all kids who put on a helmet end up playing college football.” He said FBU assists representing the players with written reviews sent to recruiters at 110 colleges across the country. “When you get a test score, it will go into our system and is available to college coaches instantly. It is that quick.” FBU coaches stressed that colleges are looking for more than sheer athleticism.

Hector Diaz, a parent and supporter of the Optimist Football program commented, “It was great for FBU to educate the kids on the fundamentals of football. It was an opportunity for our kids to show their skills and be critiqued by professionals. They brought an important message for the players to hear. It’s more than just throwing a football; you must be giving 110% all the time, keeping up your grades, your GPA and being a good person. They want players with integrity. It’s just as much mental as it is physical.”

The weekend combine concentrated on position skills. According to the FBU website, FBU has a three-fold approach:

The site notes first two make the third much easier.

Eddie Webb, Director of the Optimist Club Football, was pleased with the turnout for the combine.

“We are so excited to join the Southwest Florida Youth Football and Cheer League. The Optimist football program has come a long way, and joining the SFYFL league connects our players to the next level of training and represents them well into their future. It’s a win-win for the club, the kids and the parents.”