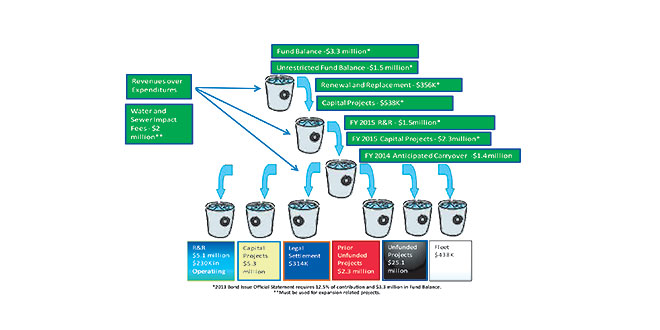 Nearly two months after proposing a new — and aggressive — general city budget plan for FY 2015, City Manager Roger Hernstadt and Finance Director Guillermo Polanco were at it again during a special-called Marco Island City Council meeting held on June 19. This time, the Marco Island Utilities budget was under the microscope.

The usual scrutiny was given to the Utilities’ perceived “spend-spend-spend” mentality, especially in light of the 7 percent rate hike that took effect on Nov. 1, 2013, and the news that $2 million of the $6.9 million the city received last summer from the refinancing of an old bond issue had been used by utility officials without City Council authorization for an unfunded seawall project. With an additional 2.1 percent rate increase set for Oct. 1, city councilors were understandably on point.

“When there is excess money here, it is spent,” Councilor Larry Honig summed up the general feeling of councilors during the meeting.

According to the presentation given by Polanco, Marco Island Utilities operated in the black for the first eight months of FY2014. While the utility has brought in operating revenues totaling more than $19.2 million this year, it has spent a little more than $15 million. Polanco projected that as of Sept. 30, the utility would have nearly $7.7 million in reserve funds.

Moreover, Marco Island Utilities General Manager Jeff Poteet was praised a number of times for cost-cutting measures implemented in 2014 that will lead to a $55,000 reduction in his overall FY2015 budget request. Chief among the cost savings were a reduction in the required sampling costs, reductions in electricity fees at both the North and South water treatment plants, reductions in bridge piping maintenance and reductions in communications for offsite stations. Councilor Amadeo Petricca requested a full accounting of these reductions.

Even so, there were also increases in spending at the utility in 2014, including higher insurance and administration charges, increases in electricity fees at the Raw Water Treatment Plant and rising vehicle maintenance costs. Both Polanco and Hernstadt also pointed out that funding gaps are anticipated for the utility over the next five years: $5.1 million in renewal and replacement projects, $5.3 million in capital projects, $314,000 for a legal settlement, $2.3 million for prior year unfunded projects, $438,000 for new fleet vehicles and $25.1 million in unfunded projects in the utility’s capital improvement program (CIP). Then there is the city’s debt service responsibilities, which total $11.447 million in FY 2014 and $11.645 in FY 2015.

To help mitigate the projected shortfalls, Hernstadt is advocating the same “debt free” budget concept that he introduced for the city’s general fund in April, adding some additional planning and approval guidelines for utility projects. While a full review of the utility’s CIP project list already has been conducted by city staff, City Council will participate in a similar review of the list, and no projects will be started until otherwise approved by City Council, even when the projects are included in the CIP.

With regard to rates and citizen concerns over them, Hernstadt and Polanco assured City Council that utility revenues and expenses are being “closely monitored” and will be reviewed again in July. Moreover, Public Resource Management Group Inc. (PRMG), the city’s utility consultant, will provide a rate structure analysis to City Council at a special rate structure workshop on Thursday, July 24, from 1-4 PM.

When Poteet completed his presentation, Councilor Petricca sighed and said, “It’s going to be fun.”