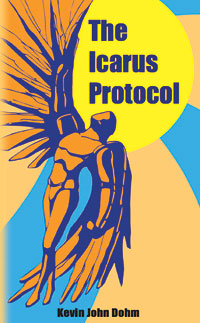 “I’ve always wanted to write a book. Many years ago, in college, I took a course where I remember the teacher asking us, ‘what makes a book a classic?’ This teacher explained how (classics) were (written in) a very rigid framework that actually began in ancient Greece. They’re called Aristotelian Tragedies. Well, I thought it would be kind of interesting to use that framework and put it into a very contemporary, modern day story.”

Kevin Dohm, a Marco Island resident and first-time author explains the concept behind his newly released fiction read, “Icarus Protocol.” Not only did he choose to write the book in the ancient Greek framework, but he chose the story of the Greek god Icarus as a metaphor behind his book.

Many may recall the story of Icarus and his wings made of feather and wax. “Icarus was literally the first pilot to fly and crash,” of the god who flew too close to the sun.

“People always say, ‘write what you know,’” he adds. “The story is based around the airline industry, a love story and second chances.” Dohm, a Captain Pilot with United Airlines, who also happens to have a very lovely wife, certainly knows these topics.

Dohm’s protagonist, a pilot named Kyle Donnar, loses his job over the airline industry collapse and finds himself living on Marco Island in hopes of working as a small aircraft instructor. Instead, he is offered a job by an interesting fellow who seems to know way too much about Donnar’s past and present. Regardless of his reservations, Donnar takes the job and ends up traveling all over the United States while the mysteries of who, what and why remain.

In the meantime, his wife Tina becomes sick, and he is forced to walk the line of helping her while being blackmailed into working jobs that are beyond his expertise and rational judgment. Will Donnar find a way to make it through these challenges or allow his own hubris to cause him to crash and burn?

Intrigued? Of course. Let’s not forget that much of the setting is all too familiar to Southwest Florida residents as the story begins on Marco Island and is centered around it. Dohm accurately describes Marco’s good, bad and the fictional ugly. From the beauty of the sunrises and sunsets to the bland Naples Daily News crossword puzzle to the Marco Airport to the depiction of the snowbird lifestyle, he nails them all.

But the story takes us far away from Marco as well. Dohm takes Donnar to many of the places Dohm has personally been throughout his career as a pilot. He describes these places perfectly and his technical descriptions of the flights show that writing what you know really does work.

Mirroring his muse of an author, Randy Wayne White, Dohm has set up a fictional story based out of his own home town. While the characters are fictitious, the locations certainly are not, and “I can say what I feel since it is a novel,” he adds.

Currently working on his second book, Dohm is sticking with Donnar as his protagonist, but bringing in new characters and new destinations.

But before we get ahead of ourselves, “Icarus Protocol” is currently available as a paperback through Amazon.com or as an electronic download. A great read for those who know Marco and a great gift for those jealous friends and family members who only wish they could live in this paradise.