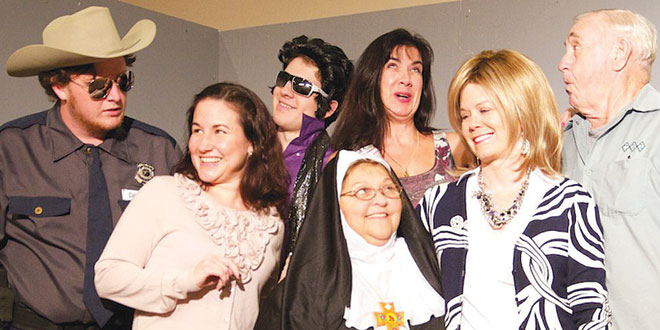 The Island Theater Company has done it again. Running from April 18th through May 4th, its new show, Mama Won’t Fly, is a comedy for all ages, and sure to entertain.

Written by the team of Jessie Jones, Nicholas Hope, and Jamie Wooter, Mama Won’t Fly is the story of Savannah Sprunt Fairchild Honeycutt’s cross-country trip to her brother’s wedding, along with her mother and the bride-to-be.

Driving from Alabama to California, because of her mother’s refusal to fly, they are in a race against time, with plenty of mishaps to slow them down. The result is a humor-filled tale with an unforgettable cast of characters played by some newcomers to the stage and quite a few local favorites.

The trio have only four days to make it to the ceremony in Savannah’s mother’s old Buick, and the trip is full of chaos, including car theft, an incident at an underwear museum, a hijacked 18-wheeler and a fight with an ordained minister/showgirl in Vegas.

The play was chosen by director Pattie Ziesig for the comedy, evident, she says, from the “very first line to the very last,” with “nonstop humor.” And she believes this comedic genius, along with the entertaining characters, is why audiences will love Mama Won’t Fly.

Mama Won’t Fly is cosponsored by Joseph F. Lang, M.D., and First National Bank of the Gulf Coast. The play will be performed at the Rose History Auditorium from April 18th to May 4th. Tickets are $20, and are available now at the Marco Island Historical Society Gift Shop, Centennial Bank, online at www.theateronmarco.com, via telephone at 239-394-0080, or at the door prior to a performance.

Opening Night tickets will include a “Meet the Cast” party following the show. Evening performances begin at 7:30 PM and matinees at 2:30 PM, with the doors opening a half an hour before curtain