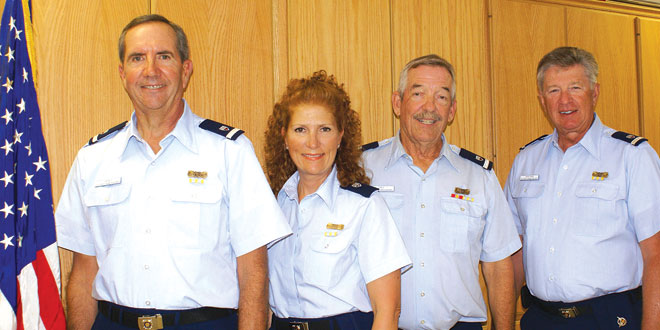 The United States Coastguard Auxiliary of Marco Island, Flotilla 95, recently celebrated the addition of four new Coxswains to its roster. This is the largest group of current Flotilla 95 Crew members to pass the difficult exam at the same time.

“It was nice to have other Crew members to work with,” adds new Coxswain and Flotilla Staff Officer of Public Affairs, Keith Wohltman. “I would have a hard time with something – navigation was especially difficult – and I’d call up one of the others and they didn’t get it either!” he jokes.

Having all four pass the test – which requires a 90 percent(!) – doubles the current amount of Coxswains in the Flotilla. Explains Dines, “as Coxswains, we will be better equipped to assist boaters and participate in our missions, including search and rescue.”

Only a few months ago did Flotilla 95 Coxswains Mike Ludwig and Rick Gerschrei find a missing boater, receiving their orders from the U.S. Coast Guard in Fort Myers. Their skills were honed in the same manner as these four new Coxswains.

The first step is to become a Crew member. There are currently 13 Crew members in Flotilla 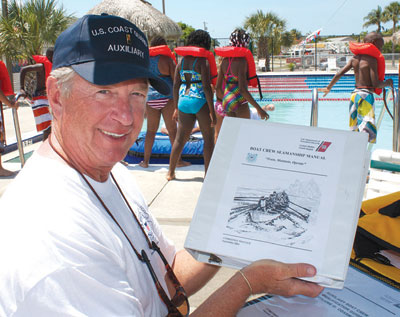 Keith Wohltman holds up the heavymanual of learning material to becomeCrew. The Coxswain manual is just as largeand requires more testing. Photo By Natalie Strom

95. The book to become Crew is immense. “I’ve been on boats my entire life,” adds Wohltman, “but there was a lot more to learn than just the basics.” For example, physics. “We learned the science of boating.”

Becoming a Coxswain means another big book, more nautical terminology, learning to give specific orders and understanding military lingo among many other things. Then each one must pass written tests, an oral test and a test out on the water. It is no easy task.

Coxswains are the Captains of the boat during any mission. They must know terminology and proper commands in order to let Crew know what to do and when. It is extremely important for the Flotilla 95 to have these Coxswains, for without them, any mission ordered by the U.S. Coastguard would not be possible.

Flotilla 95 always welcomes new members. There are a number of other positions and options for those wishing to be active boaters, instructors or just to get a chance to learn more about our waters. The general public is encouraged to take boating safety classes of different varieties offered by the U.S. Coastguard Auxiliary Flotilla 95 at its base located at the Caxambas Boat Ramp. To learn more, call Doug Johnson at 239-642-8406.