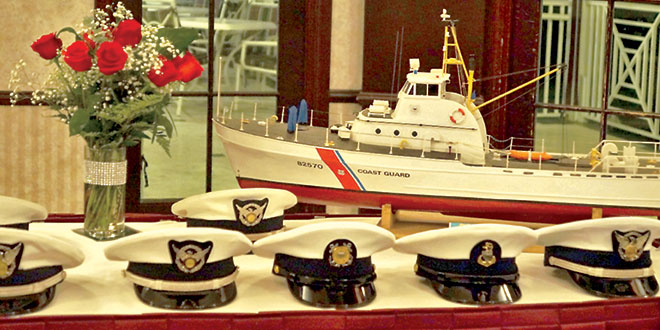 The time-honored Change of Watch ceremony is conducted annually before flotilla members, guests and dignitaries. In the ceremony, the continuity of the watch’s authority is restated. There is also a transfer of responsibility and authority from one individual, to another as part of the Change of Watch.

PDCO Walter Jaskiewicz was master of ceremonies for the evening. The

Sounding of the Bell was done by John DeFalco, a past flotilla commander. Ringing the bell provides a moment for everyone to remember those lost over the past year.

Mary Werres explained why at the head of the room stood a small empty table, with one chair. This is the Missing Man Table, a moving tradition, which is a part of the Change of Watch ceremony. The table holds various items, each holding a special symbolic meaning. A slice of lemon represents the bitter fate

Flotilla 95 staff officers as they are sworn in for 2016. PHOTOS BY JESSICA HERNSTADT

of those captured and missing in a foreign land. A pinch of salt on the table symbolizes the tears endured by those missing and their families. The glass is inverted, as the missing cannot toast with those at the ceremony. The candle is the light of hope that guides the missing home. The American flag serves as a reminder that many may never return, and that they have paid the supreme sacrifice of their lives in order to ensure our freedom. Lastly, the chair

is left empty as a stark symbol of the missing.

An award was presented to VFC Doug Bartlett for Auxiliarist of the Year. PFC Doug Johnson received the flotilla’s Exemplary Service Award. And Flotilla 95 itself was honored, earning the Flotilla of the Year Award for its service and commitment.

Auxiliary Flotilla 95’s area of operation is from Rookery Bay to Chokoloskee Pass, which includes the Ten Thousand Islands and Marco Island. Its mission is to perform essential duties in support roles to the United States Coast Guard and the Department of Homeland Security. Duties include non-law enforcement and non-military roles aiding in search and rescue missions, patrols, teaching boating education, monitoring marine safety and environmental protection, and vessel safety examinations.

Next year will be the flotilla’s 50th year of service. A new building is in 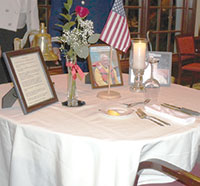 the works, as the facility at Caxambas Park has become worn with age. PFC Doug Johnson was recognized for his hard work, dedication and leadership towards obtaining the new building.

Flotilla 95 plays an important role educating our community on boating safety, teaching boating skills and seamanship classes to the public, including a “Suddenly in Command,” class where boaters learn what to do should an emergency arise and they suddenly find themselves captain.

For more information about the U.S. Coast Guard Auxiliary Flotilla 95 boating courses, and for registration, email Joe Riccio at flotilla95fsope@gmail.com or call 239-384-7416.