“Florida’s Got the Blues” 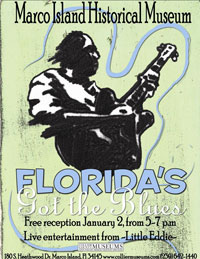 Although the state is seldom associated with the genre, Florida has a long blues tradition. For instance, did you know that the blues artist with the highest number of 78 rpm records was Tampa Red who grew up in Florida? And did you know that Blind Blake- perhaps the greatest ragtime and blues guitarist- is also connected with Jacksonville, Florida? Later, during the Great Depression, noted folklorists, Alan Lomax, Stetson Kennedy, and Zora Neale Hurston were commissioned to record blues musicians and other folk artists in Florida.

Of course, no survey of Florida blues would be complete without mentioning the late Ray Charles. He originally learned to play piano in a “jook” (juke) in his home town of Greenville, called the “Red Wing Cafe.” During his summer vacations he would play with musicians in Tallahassee cafes and at Florida A&M University.

Located on historic Marco Island, just sixteen miles South of Naples, the new Museum explores Southwest Florida’s Calusa Indians and brings this vanished civilization to life through its displays. Temporary and traveling exhibits trace the settlement of this subtropical island paradise from its early pioneer roots as a fishing village, pineapple plantation and clam cannery, through its explosive growth and development in the 1960s.

For more information about the Marco Island Historical Museum’s Florida’s Got the Blues, please contact the museum at (239) 642-1440 or visit www.colliermuseums.com.

About Collier County Museums: More than 10,000 years of Southwest Florida History is on display at Collier County Museums’ five locations – the main museum location in Naples, four additional museum facilities in Everglades City and Immokalee, the historic Naples Depot, a former train station and local favorite in the heart of downtown Naples, and the newly opened Marco Island Historical Museum. Admission to all the museums is free and the sites are handicapped accessible. For more information, visit www.colliermuseums.com or call (239) 252-8476.